ELO Alone in the Universe with Robe BMFLs 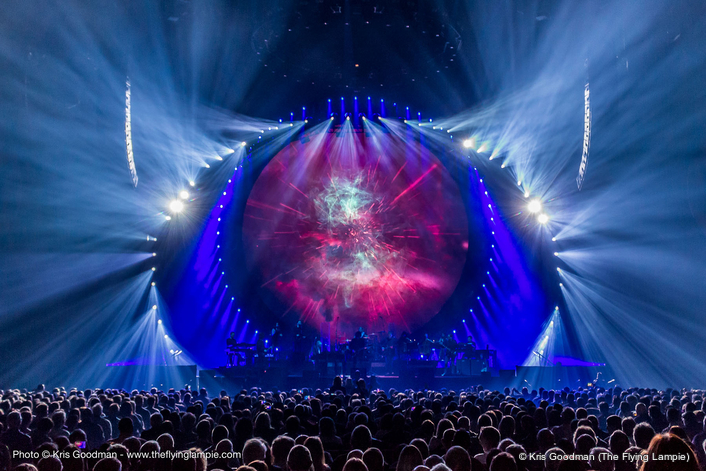 Electric Light Orchestra (ELO) who blended the sounds, rhythms and riffs of contemporary rock and pop with classical arrangements to produce a unique sound that was massively popular in the 1970s and 80s … hit the road again for the first time in 27 years, led by singer, songwriter, multi-instrumentalist and one of the original founding members, Jeff Lynne.

With them were nearly 100 Robe BMFLs - Spots and Blades – an integral part of the spectacular lighting rig designed by Tim Routledge.

This current phase of ELO activity all started two years ago when ELO, led by Lynne, billed as ‘Jeff Lynne’s ELO’ played BBC Radio 2’s “Festival in a Day” in London’s Hyde Park in September 2014. The 50,000 tickets had sold out in 15 minutes and there was a huge buzz around the performance.

This was such a success that it fuelled a brand new album, “Alone in the Universe”, a UK and European tour plus prestigious shows at Radio City Music Hall in New York and the Hollywood Bowl in Los Angeles.

Tim created the set, video and lighting design for the tour. There are numerous space references in ELO’s back catalogue of music and their historical artwork and they are also famous for their distinctive UFO logo, so Tim was inspired to create a series of ‘orbiting paths’ revolving around Jeff Lynne onstage.

This involved a substantial amount of structural circular and curved trussing and an enormous raked horseshoe shaped truss in the centre, reminiscent of the ring circling Saturn. There was an impressive O-shaped video floor centre stage and a 12 metre circular shaped (vertical) video screen at the back.

Taking a spherical theme brought a softer and more mysterious look to the stage, parts of the architecture were clearly visible while others were concealed, almost like a series of magical constellations. 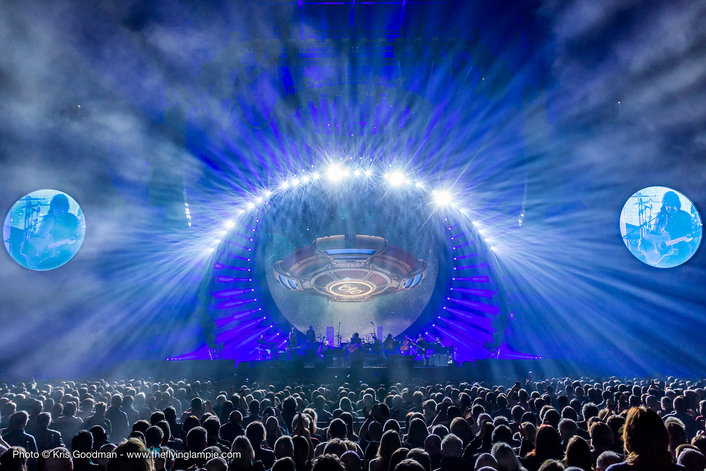 The 82 x BMFL Spots were the primary show fixtures and were dotted all over the trussing pieces but primarily on the large horseshoe. Because of the offbeat angle at which they were mounted on the truss, Robe wrote custom software to allow them to sit in that specific ‘home’ orientation.

“I needed the ability to get big chunky beams, epic gobo looks and animated effects” explained Tim on why he chose BMFLs, “and the only fixture that can deliver that at the moment combined with my need for speed and brightness is the BMFL – I’m using them on a number of my tours currently as there is simply nothing out there that can come close”.

He added that it was also the one fixture that can cut through the various LED video and effects fixture elements and the best “all round luminaire for brightness and speed”.

Ten BMFL Blades were rigged on the front truss and used for key lighting the band.

Developing all the mediums – lighting, video, set and effects - right from the outset as one coherent workspace enabled Tim to create a totally harmonious visual picture for the show design which has received great reviews and much critical acclaim as well as being loved by ELO fans original and new.

Challenges to creating the show included ensuring that Jeff Lynne felt comfortable onstage in the middle of the lighting and video, and ensuring that he could be clearly seen by everyone but not over-lit.

The lighting was programmed by Tom Young, with the basic building blocks WYSIWYG’d in advance in Tim’s studio, and then the show finessed and fine-tuned during production rehearsals in Wakefield. Lighting director on the road was Matt Pitman who also acted as co-designer alongside Tim.

Jeff Lynne’s ELO will play the Sunday afternoon Heritage Slot on the Pyramid Stage at Glastonbury Festival of Music and Arts in June.