The program, a variety show with hidden camera stunts and musical performances, has aired since 1980 and is an institution of German television. 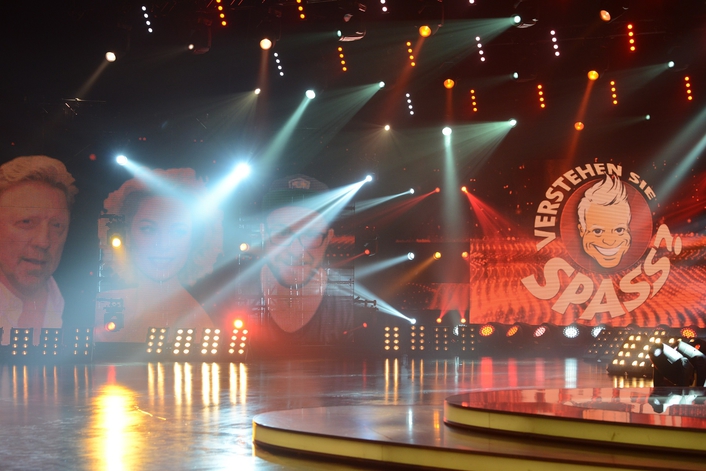 The Elation lighting was used to light three performances, two on a live show on Saturday, April 23rd and one on a show recorded days earlier. Gerdon chose to use Elation’s ACL 360 Roller for its retro look and placed 12 fixtures in two lines on the floor, left and right. “It’s a vintage disco look,” he says of the 4-bar LED moving head that casts a continuous 360° array of multi-colored effects. “We film on a modern TV stage with LED walls and I wanted something extra that would link to the past. It’s a roller bar design from the 1980s, something you’d see in RUN DMC videos, so we used it for a special effect on the live show for a breakdance group.” 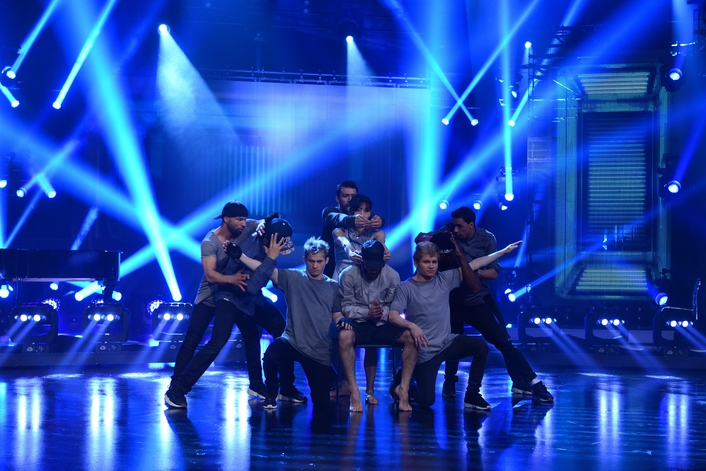 Used as a special effect on all three acts were 12 of Elation’s hybrid Platinum SBX fixtures. “I used them for their multi-functional properties and they gave a lot of options,” Gerdon states of the spot/beam/wash light. Working from the upstage floor, he used them for a variety of purposes including as backlight on the opening of the live show where guests are shown on the LED screen; for tight, modern beam looks for the breakdance performance; and on a slow song for a dramatic, big flower look. 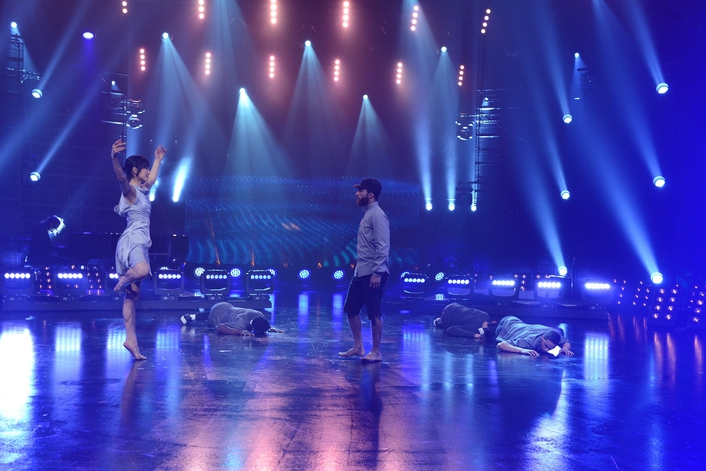 “I did all three tasks with one fixture,” he states. “I don’t know another fixture that does all three functions so well. Other hybrid lights fail at at least one of the functions. Their sharpness was great and their beam is much brighter than a Sharpy’s. The SBX is at a whole other level. The quality of the beam, the sharpness and appearance in haze was detailed and defined.”

On the downstage edge of the stage were two gray-colored set pieces whose drab appearance posed a problem for a set that required color. “There was no money to do anything with those,” Gerdon explained, “so we covered them in colored light from eight Satura Spot CMY Pro fixtures. I was surprised with their output. They are much brighter than I expected with the LED engine.” The Satura Spot CMY Pro houses a 320W LED engine that delivers comparable color output to a 575W fixture. Placed left and right on the downstage edge to cover the set pieces, the fixtures were also used for above-camera beam projections.

Located upstage behind the LED screen were 12 Platinum Wash ZFX Pro XL fixtures whose role Gerdon says was straightforward. “Their role was simple. When lighting for camera you don’t want black holes and we had a black hole under the LED screen so I used them as back coverage there.”

Gerdon was happy with the on-camera functionality of the Elation fixtures and calls out the Satura Spot CMY Pro and Platinum Wash ZFX Pro XL for their on camera compatibility. “I expected them to work well on camera but was happy they did it so well,” he said of the fixtures, which had no flickering issues. “They did it perfect. There was no pausing, no flickering. LED sources can sometimes jump but there was no jump with these.” He was also satisfied with their color mixing, which he called “surprisingly good,” adding “It was better than other lights I had in the rig. They could do all the colors plus colors that the other lights in the rig couldn’t achieve.”