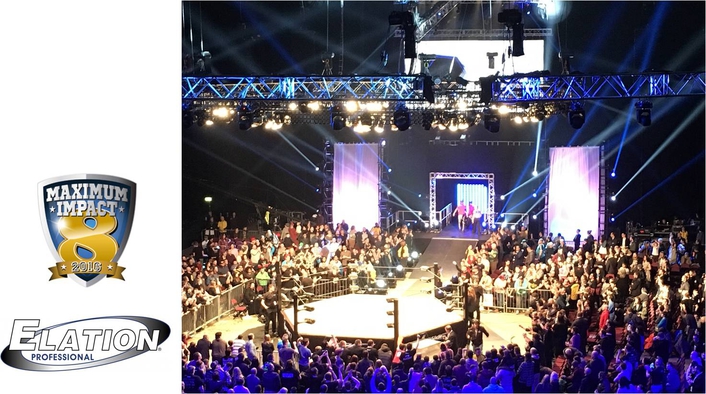 With a loyal fan base in the UK eager to see their favorite wrestler vie for ring dominance, American professional wrestling organization TNA Wrestling traveled to England earlier in the year for a series of arena shows dubbed the MAXIMUM IMPACT 8 Tour.

Elation Professional lighting fixtures have been staples on TNA Wrestling events in the UK recently with this year’s lighting package predominately made up of Elation Platinum Beam 5R Extreme™ and Platinum Wash ZFX Pro™ moving heads.

This year’s shows, which included an extra layer of emotion as they marked wrestling legend Kurt Angle's final bouts, were designed by Emmy Award-winning LD Jeff Bornstein with Ian Livie, whose production company has provided entertainment technology for TNA’s UK shows for years, assisting with the design elements. Lighting operation was by Andre Huff. 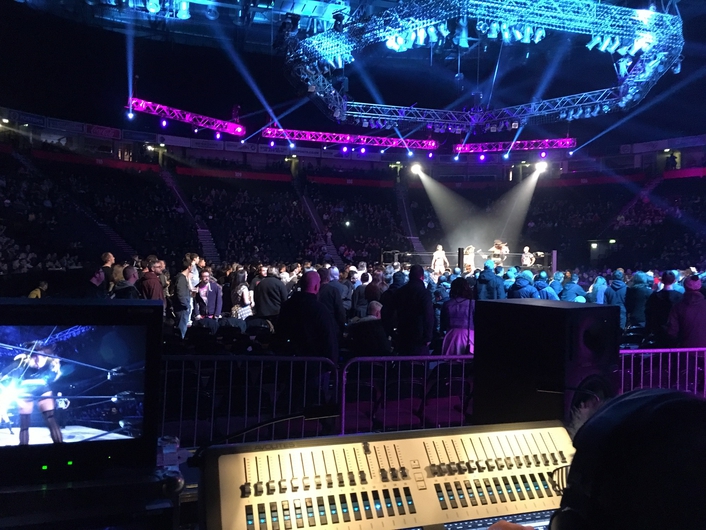 Lighting Designer/Director Jeff Bornstein has been with TNA on and off since its inception with his current affiliation starting in 2006. He commented: “The Platinum Beams are an integral part of creating a third dimension in lighting as they pierce the air like no other fixture, have great color, sweeping  movement, strobe, and prism rotation. The Platinum Wash ZFX allows for lighting scenic elements, as well as allowing for color area wash when a character treatment is appropriate.” Bornstein says he has also used Elation Elar series PAR lights for nine years as truss warmers “as no competitor has equal output.” He also uses Platinum Beams on all his shows in the US. 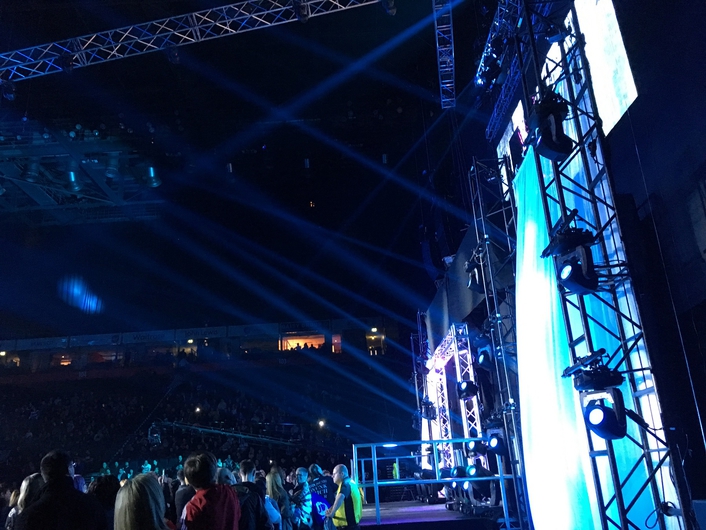 The UK shows, which played in Manchester, London and Birmingham, were also recorded for TV broadcast. Ian Livie explains the Elation lighting’s role on the event. “Lighting was a major part of the show as we really had to make a little look like a lot,” he says. “It was a big show because of Kurt Angle’s final appearance. We had to create excitement, create a busy look and the lighting was used to do that.”

Ian Livie.com supplied all the production for the shows – sound, lighting, video, rigging and set – the company’s ninth year as the principal vendor for TNA shows in the UK. Livie, who has used beam lights on TNA events for many years and was one of the first lighting designers ever to use beam lights when they first came out, often turns to Elation’s industry-staple Platinum Beam 5R Extreme. “We created an ambiance light show with a big, bold and beautiful design,” Livie comments. “We used the Platinum Beam fixtures for principal wash and effects for the entrance and arena. They gave the dynamic effect we wanted and have the power to really cut through.”

The Platinum Beam effects were used as the talent came into the arena at an entrance area where four scenic towers held three Platinum Beam 5R Extremes each. Additional Platinum Beams projected their narrow, dense beams from the stage floor while more fixtures operated from above a video wall. “There was a lot of ambient lighting that the Platinum Beam Extremes had to cut through, not least from the LED video screens, and they did,” Livie states. “They are a superior looking light with excellent optics and destroyed the arena.” Some 44 fixtures were used in total.

“Ian Livie and his crew are truly the most dedicated, hard-working professionals I’ve had the pleasure to work with,” Bornstein concludes. “They work tirelessly, maintain a great attitude, handle issues as they arise and keep me informed of the status as needed.”