Dolby Atmos for all 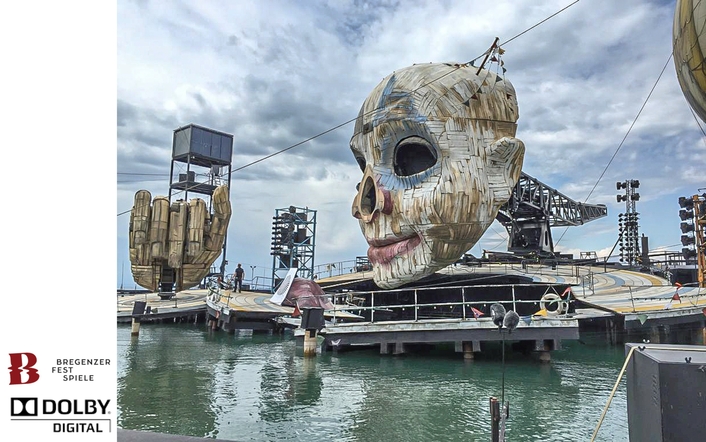 The floating stage in Bregenz, in the foreground the microphones for the audience atmosphere

Opera “Rigoletto” as Arte-showcase for UHD HDR and Dolby Atmos

The Swiss technology service provider tpc produced a recording of the opera “Rigoletto” from Seebühne Bregenz in 2019 – also as a showcase for a UHD HDR production with Dolby Atmos, which is now accessible via HbbTV. Reason enough for Bernhard Herrmann to take a look at how the recording was made and what the state of things is with Dolby Atmos.

The globally active technology company Dolby Laboratories brought Dolby Atmos to cinemas back in 2012. Two years later, Dolby Atmos made it into living rooms with the home entertainment products available, and in 2016 there was the first smartphone that supported Dolby Atmos via headphones. New UHD televisions are currently offering integrated Dolby Atmos speakers. “Dolby Atmos is a sound format for mixing and reproducing sound in 3D space. Sound objects with metadata can be placed and moved to create an immersive and realistic soundscape that puts the listener right in the middle of the action”, explains David Ziegler, Senior Content Engineer at Dolby Germany. "Dolby Atmos can be experienced in the cinema, at home, on smartphones and in 2022 also in the car," adds Arnd Paulsen, Senior Manager Broadcast & OTT Eco-System at Dolby Germany. "Listeners hear moving audio in live event broadcasts, on-demand and linear television, streaming and as a hybrid delivery."

“As a key component of the Dolby audio system, Dolby AC-4 offers new immersive and personalized sound experiences. It combines state-of-the-art bandwidth efficiency and powerful playback adjustment to provide the optimal listening experience no matter where the viewer wants to hear it. Working in ETSI, ATSC3.0, DVB and HbbTV specifications, Dolby AC-4 is the next generation audio solution for broadcast and IP content delivery. With Dolby Atmos technology, any voice, instrument or sound can be placed in the room”, adds David Ziegler. 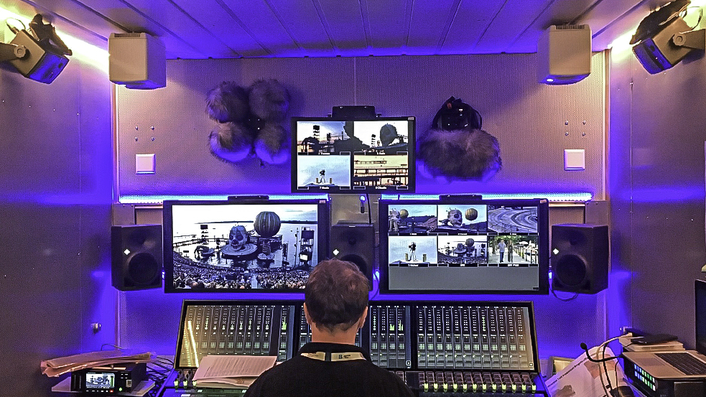 Sound engineer Markus Brockmann during the recording in Bregenz

SHOWCASE OPERA
The Swiss production company tpc, which in the meantime re-merged with the SRF, had the contract to realize the opera “Rigoletto” on the Seebühne as a live broadcast for Unitel, ORF, SRF and ZDF at the Bregenz Festival in Austria in July 2019. "The first challenge was that the opera took place on the floating stage and the orchestra played in the Bregenz Festival Hall in front of it," says Markus Brockmann, Team Leader Audio External Transmission and Sound Engineer for Dolby Atmos at SRF.

The orchestra in the Bregenz Festival Hall was equipped with a total of 48 microphones. A Decca tree in 5.0 configuration served as the main microphone. In addition, all registers were removed with support microphones. In addition, four heights microphones were used in the stage building above the orchestra to reproduce the height information in Dolby Atmos. The sound signal was sent via a fiber optic cable to the sound system mixer on the Seebühne.

The eleven soloists on the Seebühne were each equipped with two wireless pocket transmitters and two soloist microphones. Eight microphones were used for the audience atmosphere. One audio signal path led to the sound PA, the other signal path ended in the audio control room in the OB van. On the main mixer, a Stagetec Avatus console, 120 audio tracks were mixed in 48 kHz. The second sound control room was used for the Dolby Atmos mix with another Stagetec Avatus mixer. "The aim was to create a homogeneous feeling of space with the help of two Lexicon PCM96 Surround Engines, multi-track recording in 128 channels of all individual signals and mixing in Dolby Atmos including a submix on Merging Technologies Pyramix," explains the sound engineer. “Dolby provided a Dolby DP590 for rendering, a Dolby DP591 for encoding and a Dolby DP580 for decoding. An RTW TM9 with an Immersive Sound Analyzer license was used as a measuring device. ”The Dolby Atmos mix was carried out with the defined groups with existing submixes from the main control room, such as for orchestra and audience atmosphere as well as the individual soloists and the additional atmospheric microphones for Dolby Atmos by two sound engineers.

“With this experienced audio production staff and the defined workflow, the UHD HDR live broadcast with Dolby 5.1 sound and mix for Dolby Atmos has proven itself. The Dolby Atmos mix produced in Bregenz only required a little 'audio-cosmetic' processing for a potential distribution in the Dolby Atmos sound control room at SRF in Zurich", says Markus Brockmann and adds: "Then as well as now there is no possibility of broadcasting a UHD HDR live broadcast with Dolby Atmos via the channels of ORF, SRF and ZDF. It would be possible to broadcast such special events via an Astra UHD satellite channel or via live streaming in the media library”, explains Arnd Paulsen from Dolby Germany. “The enthusiasm for Next Generation Audio was particularly noticeable among those who had heard the Dolby Atmos mix in Bregenz. Live production with Dolby Atmos is manageable these days and doesn't really require any additional effort. " 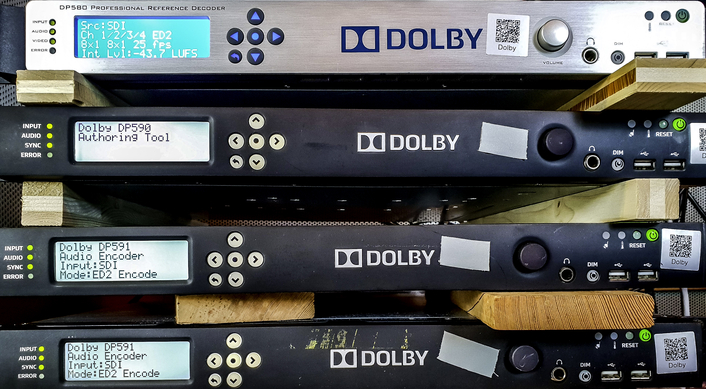 Anyone who wants to swatch and listen to content in UHD HDR and Dolby Atmos aside from showcases will quickly discover that not a single public broadcaster offers this quality, which has been technically available for years. That is unlikely to change in the near future. Due to the lack of bandwidth, there is also no program in UHD via the DVB-T2 HD reception path, but in 1080p50, and the satellite reception system and the Internet are no way to regularly watch public service programs in UHD and to listen to them in Dolby Atmos. All 20 available public TV channels will continue to broadcast only in HD-Ready (720p50) over the next few years.

As a result, by the end of 2021 around 23 million households in Germany equipped with UHD televisions will be excluded from public broadcast content in better picture and sound quality and will turn to the streaming providers. However, the “Rigoletto” showcase demonstrates that two years ago it was possible to broadcast a successful TV production live in UHD HDR and Dolby Atmos with qualified staff and without significant additional effort. As it stands, ARD and ZDF will not be upgrading to UHD HDR and 3D audio as the best TV standard in the foreseeable future.