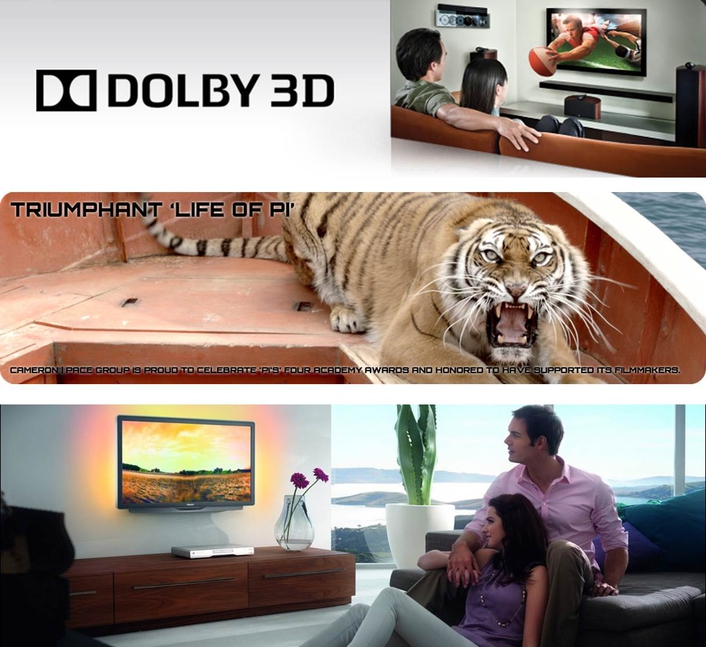 .
Dolby Laboratories and Royal Philips Electronics in association with CAMERON | PACE Group (CPG) announced at NAB in Las Vegas that they have signed an agreement to integrate the Dolby 3D format into CPG’s 3D video content production workflow and to collaborate on the use of the Dolby 3D format. All parties believe that glasses-free 3D presentation in the home can be improved by delivering premium-quality autostereoscopic 3D content using the Dolby 3D format.

Dolby was showcasing CPG’s 3D content in its NAB Show booth as part of its demonstration of Dolby 3D technology from post-production through distribution to playback.

Led by founders James Cameron and Vince Pace, CPG is advancing 3D through the development of products, solutions, and creative tools for use across all media channels. Supporting networks, studios, broadcasters, filmmakers, and creative teams globally, the company has considerable expertise that helps content producers realize the full potential of 3D as a new, immersive, and powerful storytelling medium. CPG-supported films and broadcasts have won numerous Oscars and Emmys for both technical and creative achievements, including three Best Cinematography Oscars in four years. 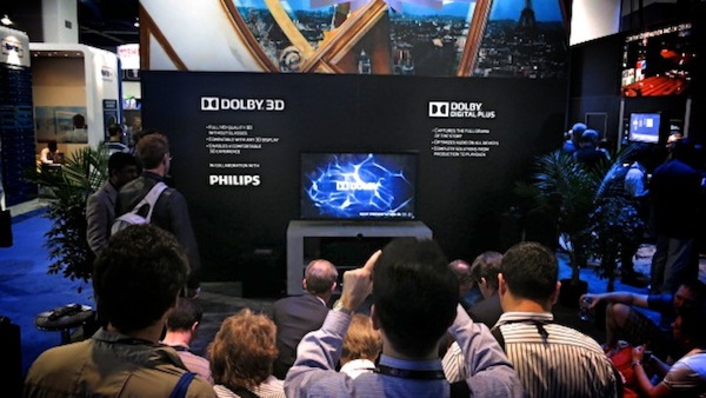 “James Cameron broke new ground in entertainment with his use of 3D in film, but it’s been a challenge to bring his vision to the home and to smartphones and tablets,” said Vince Pace, Founder and Co-chairman, CPG. “The Dolby 3D format gives film-makers the means to bring an artistic vision through production and distribution all the way to presentation, while delivering what we believe to be the best possible 3D experience to consumers—without the need for special glasses.”

Dolby 3D is a comprehensive suite of technologies for the creation, delivery, and playback of glasses-free 3D content, producing autostereoscopic images with lifelike realism. In addition to eliminating the need for glasses, Dolby 3D has no narrow ‘sweet spot’, so viewers can enjoy the sharpest images, regardless of where they sit.

“Dolby and Philips are committed to taking the 3D experience to the next level, so we are very pleased to be working with CPG to jointly promote a technology that will transform the way 3D content is consumed all over the world and to introduce a new way for the creative community to tell the story,” said Guido Voltolina, General Manager of the joint project.

About Dolby Laboratories
Dolby Laboratories (NYSE:DLB) is the global leader in technologies that are essential elements in the best entertainment experiences. Founded in 1965 and best known for high-quality audio and surround sound from the cinema to the living room to mobile devices, Dolby creates innovations that enrich entertainment at the movies, at home, or on the go.

About Royal Philips Electronics
Royal Philips Electronics of the Netherlands (NYSE: PHG, AEX: PHI) is a diversified health and well-being company, focused on improving people's lives through timely innovations. As a world leader in healthcare, lifestyle, and lighting, Philips integrates technologies and design into people-centric solutions, based on fundamental customer insights and the brand promise of "sense and simplicity." Headquartered in the Netherlands, Philips employs approximately 122,000 employees, with sales and services in more than 100 countries worldwide. With sales of EUR 22.6 billion in 2011, the company is a market leader in cardiac care, acute care, and home healthcare, energy efficient lighting solutions and new lighting applications, as well as lifestyle products for personal well-being and pleasure with strong leadership positions in male shaving and grooming, portable entertainment, and oral healthcare.

About CAMERON | PACE Group (CPG)
CAMERON | PACE Group (CPG) is the industry leader in 3D technologies and production services from SLATE²SCREEN™. Led by founders and cochairmen James Cameron and Vince Pace, CPG delivers the highest-quality 3D through its technology products, solutions, and creative tools engineered for use across all media channels. Supporting filmmakers, broadcasters, studios, networks, and creative teams globally, the company has unparalleled expertise in helping content producers realize the full potential of 3D as a powerful and immersive medium. CPG's easy, efficient, and cost-effective 3D solutions have supported productions generating more than $8.5 billion in box-office revenues, enabled 31 3D feature films, more than 300 3D broadcasts, and multiple 3D media experiences in all formats. CPG-supported films and broadcasts have won numerous Oscars and Emmys for both technical and creative achievements, including three Best Cinematography Oscars in four years.