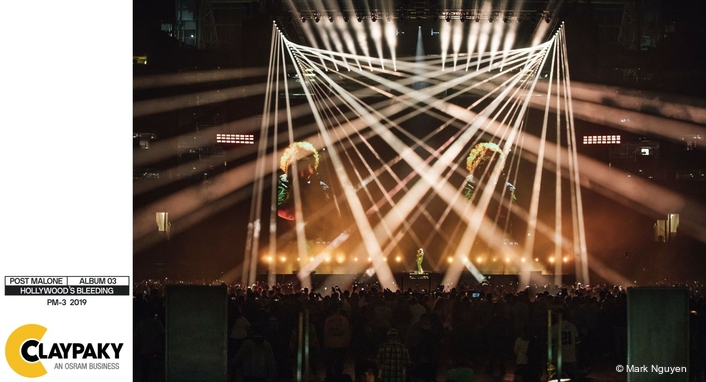 The Posty Fest, rapper Post Malone’s second annual live music festival held November 2 in his hometown of Dallas, marked the first use of Claypaky’s new Xtylos in the United States. Creative Directors and Designers Lewis James and Travis Brothers tapped 178 Xtylos fixtures for the event.  Xtylos is a compact beam moving light with a tailor-made RGB laser source that’s a powerful engine for an incredible array of colors.  The fixtures were utilized in conjunction with Production Resource Group (PRG), which was the lighting vendor for the production.  The show also utilized 52 Claypaky Mythos 2 and 24 Claypaky Scenius Unico fixtures for the extensive lighting rig in the AT&T Stadium in Arlington, Texas

Post Malone hosted and headlined the festival whose guest line up included Meek Mill, Pharrell Williams and Jaden Smith.  Malone is currently on a North America arena tour in support of his latest album, “Hollywood’s Bleeding,” his second No. 1 album on the Billboard 200. The show was designed with a massive square stage with catwalk and large LED screen backdrop.

“I saw Xtylos on a trip to Italy and knew they would be perfect for their concepts, so I pitched the idea to the Posty team,” says Nick Whitehouse, Creative Producer with Fireplay.

James notes that the design focuses around  large central cube and a “concept of crowd pods that cast columns of light directly down into the audience” - a motif he designed for Posts World Tour. 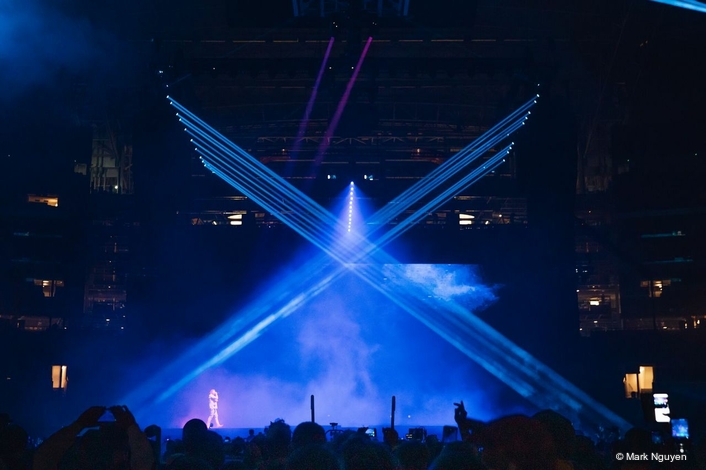 It was important to translate this motif to the stadium. The design had strategically placed aerial foggers to emphasise the texture and volume of the fixtures James adds that “the Xtylos’ strength was perfect for interpreting the bold looks we needed.” 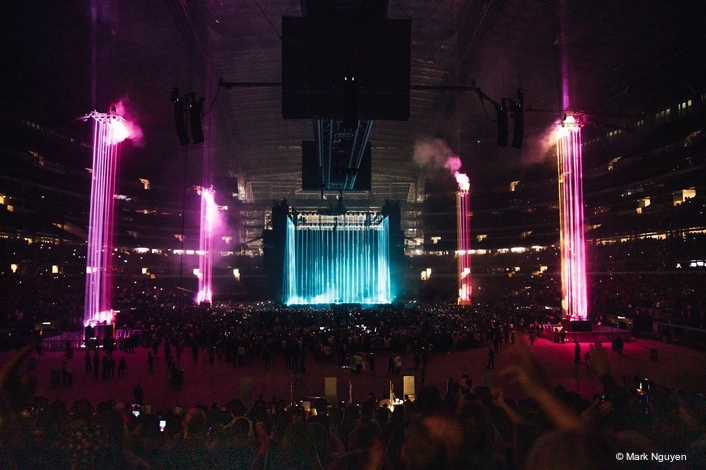 “We always love the idea of riot and atmosphere out in the crowd, somehow capturing that energy from the artist and dispersing it to “totem” columns that people can feel connected by.” 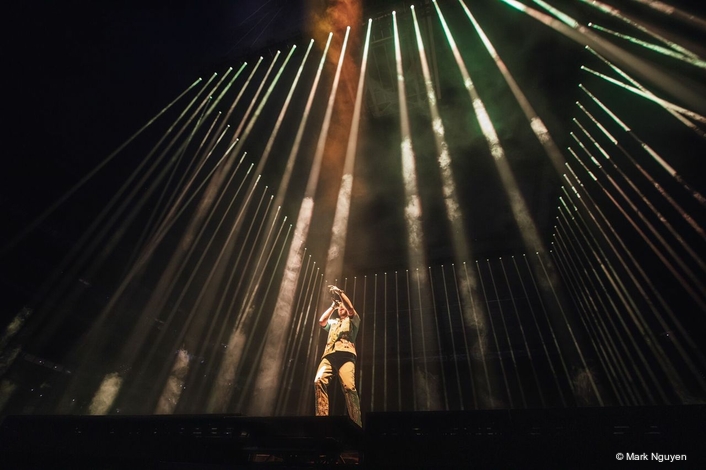 It was really a large collaborative process when it came to light. Whitehouse and James collaborated on the core elements of the design - positioning them in brutal formations to help create structure and architecture to the stadium space. “I felt they were the right choice for such a large scale production, the solid and endless beams provide us with a lot of range and scope when it comes to composing the light of the performance. With the help of lighting designer Ben Dalgleish we terminated them at a range of unorthodox positions in the stadium which gave us some really interesting looks that I haven’t seen before. Ben did a great job of translating the ideas and sketches to something functional we could use within the show,” adds James. 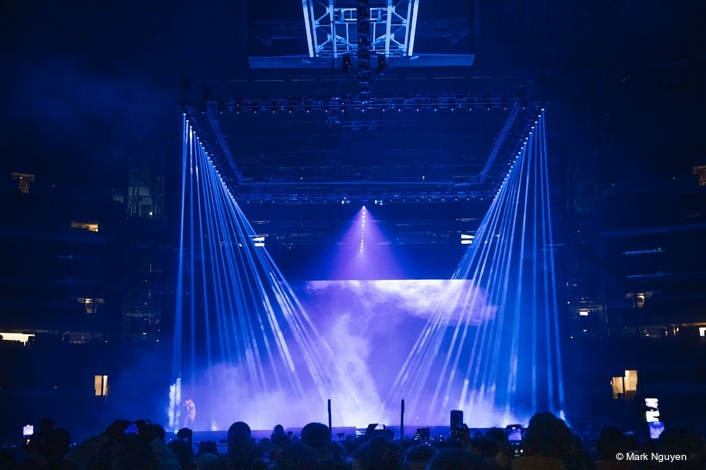 Dalgleish was impressed by “the incredible power and brightness of the new fixture over the full color spectrum. The Post Malone show is designed to lean more towards architecture and form over normal hip hop or rock and roll lighting.  The brightness of the Xtylos allowed me to push this idea further than we have before.  I created a whole range of looks of Xtylos fixtures terminating in another fixture sometimes 100 feet away with the beam fully visible across the whole span: instant architecture.”

He also gives kudos to “the unique strobing of the fixture.  As the source is a laser, dialing in a strobe look was similar to working with the refresh rate on a traditional laser unit.  The ‘max strobe’ was so fast it was barely visible to the eye, but it changed the way the beam looked in a very interesting way.  For example, in the song ‘Candy Paint’ I went for a traditional ‘flyout’ effect that I would not normally use in the Post show, but by adding the high frequency strobe it made the movement look much more dynamic and artistic than a normal beam flyout.” 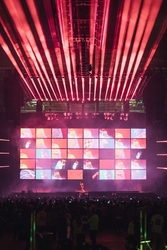 Whitehouse reports that the Xtylos fixtures “looked amazing and exceeded my expectations.  The Posty team did an incredible job using them and integrating them into their show.” 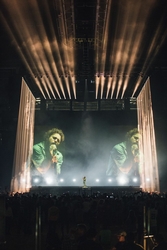 “We were very proud to be part of this production. This is a seminal moment in automated lighting - the first use of a revolutionary new product in North America. After so much hard work by so many folks at Osram and Claypaky, it was thrilling to see the results and to watch the designers and programmers first experience and then embrace the product.  The feeling of being part of the start of something newly exceptional in our industry was truly exciting for all of us,” concludes George Masek, Claypaky Strategic Marketing Manager.

Lewis James and Travis Brothers were the Creative Directors and Designers with Post Malone and Ben Ward the Lighting Director. Ben Dalgleish the Lighting Designer. At Fireplay, Kelly Sticksel was the Creative Producer, along with Whitehouse, and Kevin Twist was the Production Manager.