Bringing live music back with the Hella Mega Tour 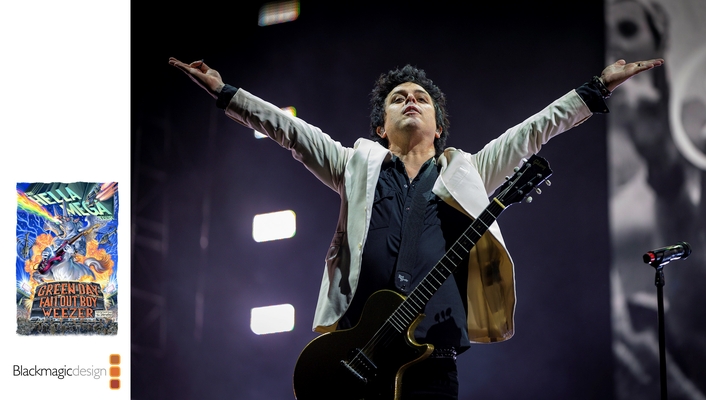 Nothing says live music is back more than the PYRO of a Green Day concert. This summer the multi-platinum selling punk idols teamed with fellow alt rock legends Fall Out Boy and Weezer for the Hella Mega Tour, a pandemic rescheduled globe trekking 50 date event across 2021 and 2022.

It is among the first and arguably the biggest stadium rock juggernaut since live music halted in spring 2020. With three headline acts each show is a five hour spectacular. The US leg which ran July to September played to 30,000-45,000 people each night at Major League Baseball venues, including Wrigley Field, Fenway Park, Target Field and LA’s Dodger Stadium.

“There’s an added responsibility to ensure that every show is as good as it can possibly be for fans starved of live music for so long,” says Stuart Merser, director of UK live production specialist Vis-A-Vis Video tasked with designing and delivering the video workflow for the tour. 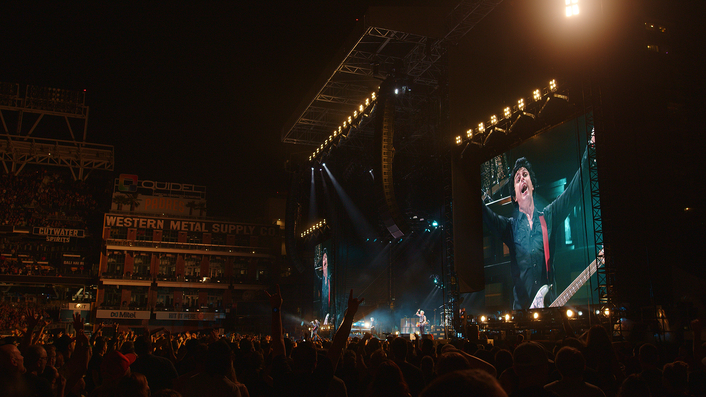 Stuart is no stranger to such pressure. Vis-A-Vis Video has a growing reputation for tour visuals having previously worked for acts including Josh Groban, OneRepublic, Ariana Grande & Billie Eilish

For the Hella Mega Tour, Stuart worked on the creative concept with designer Justin Collie & Spike Brant from Nimblist and for Green Day directly. It was a given that they would rely on Blackmagic Design for acquisition, control and delivery.

“It’s absolutely essential that I am able to count on the kit not just once but every single time,” Stuart says. “Having worked with the Blackmagic camera chains and video processing equipment on previous major tours I have total confidence in it to withstand the rigours of a gruelling schedule. What that allows me to do is concentrate on developing other creative aspects of the experience and on directing the show.”

Specifically, Stuart designed and specified the video workflow to include a new BlackCam tracking system which connected Blackmagic cameras with the band’s performance on stage. 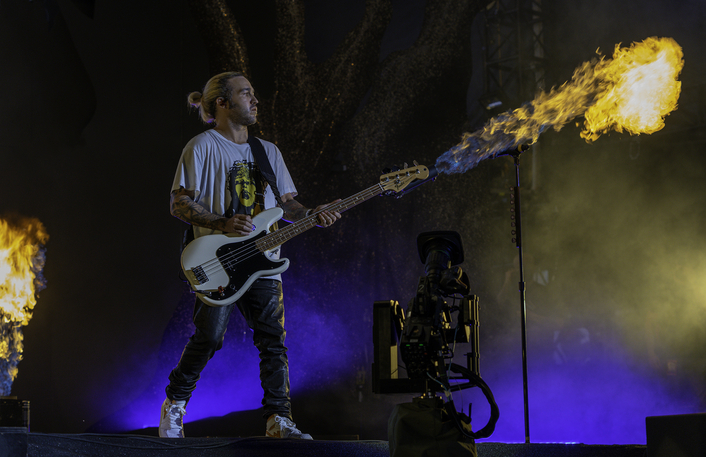 “The convention is to put two camera-operators handheld in the pit, maybe fixed mini cameras on stage with a long lens FoH. With the scale of pyrotechnics planned for this show it wasn’t possible to put operators safely on stage, but I felt there was a way to bring the band closer to the audience. I brought the idea of an automated dynamic camera to the table to give Green Day’s lead singer Billie Joe Armstrong in particular free rein to interact with fans via a camera at all times.”

Vis-A-Vis designed three systems based on BlackCam’s tracking systems. The first was the B60 carrying an URSA Broadcast with a Canon CJ15ex4.3B lens on a 60 foot track. The 90 degree curved rail ran along the front right hand side of the stage and continued down a 30 foot thrust running out into the crowd. A second B60 system with URSA Broadcast covered the left side of the front stage edge, while a smaller B20 dolly carried a Micro Studio Camera 4K on a tight circular track around Green Day drummer Tré Cool and his kit. 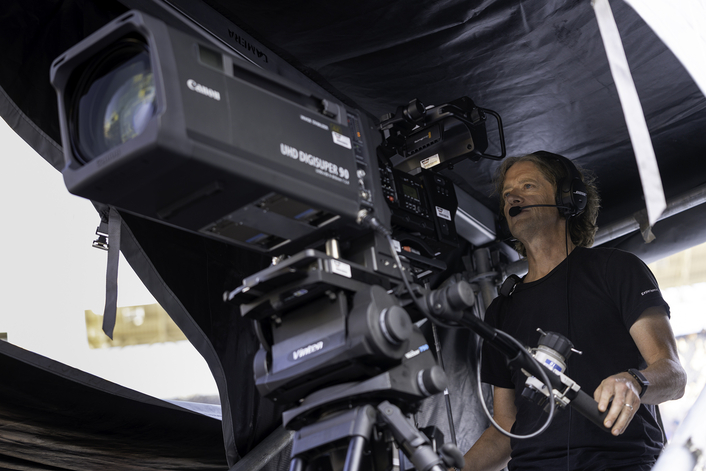 “I wanted to get across the dynamism of the drummer without having a camera-operator standing all over him,” Stuart says. “We’re not putting anyone between the band and the audience.”

Content from these sources plus another front of house positioned URSA with a Canon UJ90x9B and three other Blackmagic Micro Studio Camera were carried across SMPTE fibre to feed a bespoke production desk, built around a Smart Videohub 40x40 router, with an ATEM 2 M/E Broadcast Studio 4K with an ATEM 2 M/E Broadcast Panel to produce two IMAG displays stage left and right and a central video wall mix. 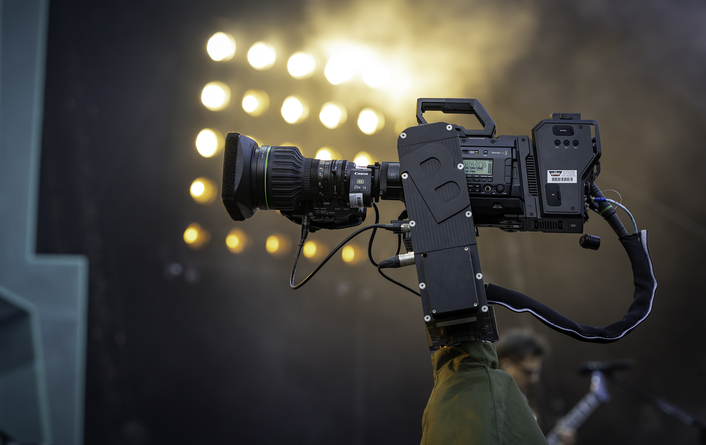 “One of the great things about Blackmagic is being able to mix and match tools. We’re not only able to control the Micro Studio and URSA flawlessly from the production desk but the colour setting across the cameras was perfect. The production deck itself is an all-in-one unit we’ve custom built to be tour friendly to get in and out of places fast. It’s Blackmagic Design from start to finish with all the modularity and patches needed to allow our engineers to get in, plug in, test, go live and get out again quickly.”

Live content was also fed through VideoDust, a real time video manipulation software, built around a series of Blackmagic capture and playback cards, and developed to create a variety of effects for a dynamic backdrop. 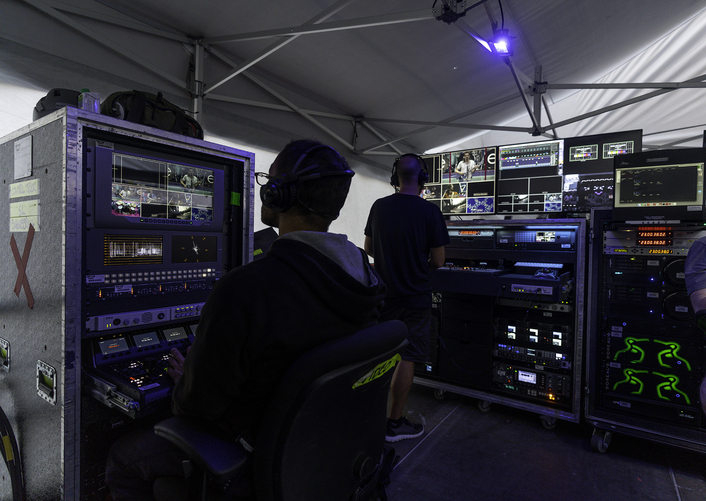 “With this version we’ve been able to pick out a snare hit for certain songs and use that to trigger a particle effect in the video playback. It works really well for this style of music and helps electrify the experience.”

Not only was turnaround between dates incredibly tight but all venues were also open to the elements. “We were dealing with everything from 100-degree midday heat in Texas to horrific weather in the American south when on some shows it poured with rain the entire time,” explained Stuart. “We custom built rain covers for all our kit and set up a 20ft x 10ft tent with aircon for protection but working with tough kit from the start was very important. No matter the environment, the show has to happen every night.” 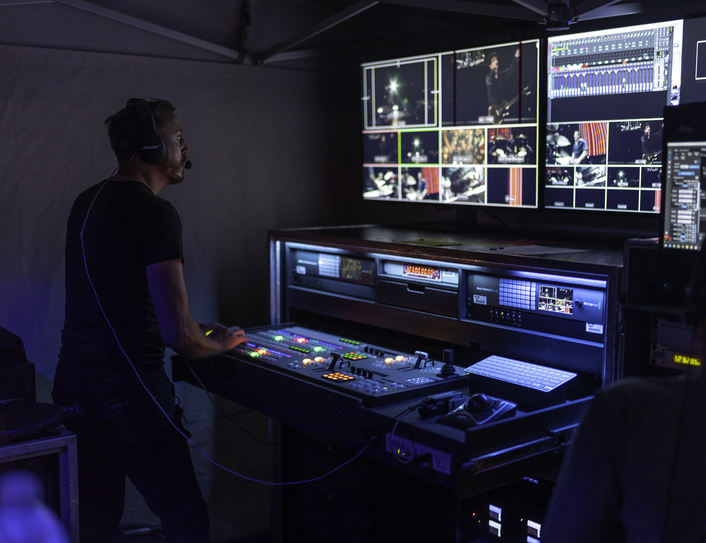 With back-to-back stadium shows in different cities, the tour sends an advance team to set up the staging exactly as it needs to be when the production crew arrive on site.

“After the past 18 months it is fantastic to get music shows back on the road, but I hope fans realise the effort, care and attention it takes from a lot of people behind the scenes. We don’t just rock up and play a show. We’re touring in the middle of the Major League Baseball season and Zito, the production manager is constantly liaising with the stadium owners and groundstaff to make these shows happen between games. We’ve a crew of over 100 people working round the clock constantly getting gear on and off trucks. It’s a tough working environment where every piece of the puzzle has to happen to deliver the production. Logistically we have to making sure the right people are in the right place at the right time.

“That said, there is nothing more thrilling for me as a director than feeling the energy my camera-operators get from the band travelling down the fibre to make the show what it is.  A director is only as a good as their camera team and my guys kill it every night.”

The European leg of the Hella Mega Tour is due to kick off June 2022 with dates in Austria, The Netherlands, London and Dublin.