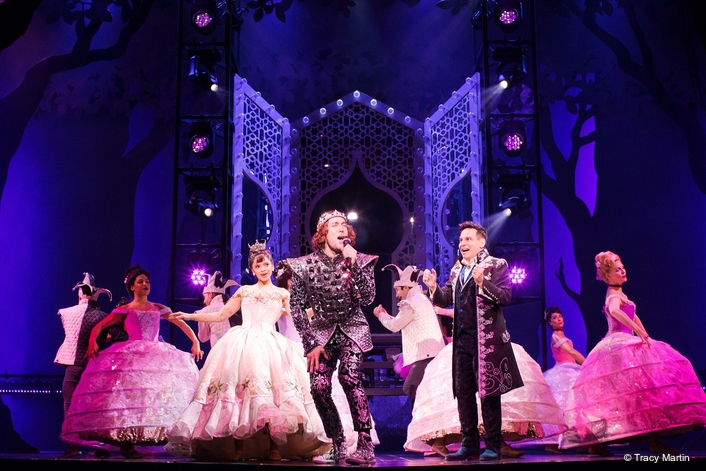 Created at The 5th Avenue Theatre in Seattle, Bliss is a refreshing new musical fantasy full of emotion and humor that shatters assumptions about what a fairytale princess should be. The empowering tale had its world premiere run Feb 7–23 and was enthusiastically received for its catchy music and nontraditional storyline, not to mention a fabulous scenic and lighting design.

The unorthodox ethos carried into the lighting rig as well where lighting designer Yael Lubetzky incorporated Elation Rayzor 760™ luminaires in her design, an LED moving head fixture you more typically find in a concert rig, which is exactly where the LD first discovered it. “I saw a Rob Thomas concert at the Beacon Theatre in New York and saw the Rayzor 760 and thought these are exactly what we want in the show,” Yael shares. “When I saw the units sparkle effect, I was so surprised. I had never seen anything like it before. It was fantastic!”

SparkLED
The Rayzor 760 is a wash effects fixture with seven large RGBW LEDs, wide zoom and continuous rotation, but it was the luminaire’s unique SparkLED™ background illumination system that really caught her attention. “[Elation National Sales Manager] John Dunn did a great demo for us and showed us everything it could do,” the lighting designer says. “When I saw the SparkLED I knew how perfect it was for our show. Not only for the music and concert effects, but also as a reflection of this character who lives in the Castle of Mirrors. It was specifically because of it that I chose the fixture.” 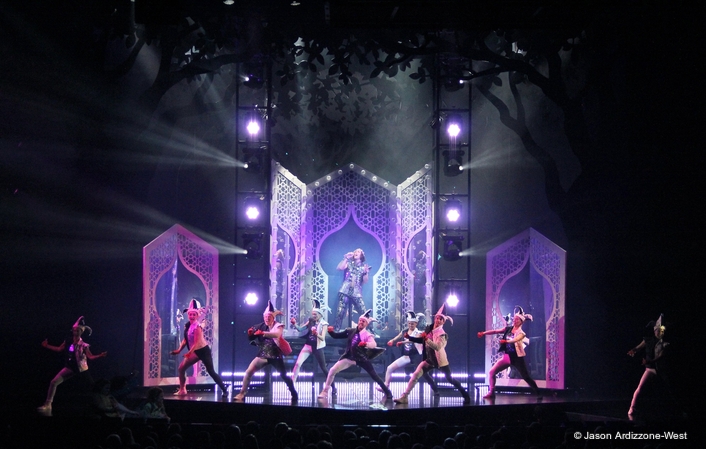 SparkLED is a unique sparkle effect created by 28x 2W white LEDs inside the fixture’s oversized lenses. The high-brightness pixels allow for distinctive lens illumination and eye-candy twinkle looks and are controllable via the lighting console or driven by a multitude of internal FX patterns. “We had them hung on two vertical trusses facing straight forward on a scenic unit that flew in far downstage. The Rayzor unit for us was a unique scenic element with movement so it could transform into a concert. They provided a great visual look for the audience,” Yael explains, noting that the fixtures were used for scenes featuring a particular character in the play called Prince Devin, who has a rock star image and is usually surrounded by an entourage of jester dancers.  “I wanted to bolster this rock 'n' roll look with something special. The unique quality of the SparkLED within the unit was something I had not seen in the theatre before and knew it would play a big part in these production numbers. With much of the concert lighting design inspired around the idea that we would get these lights, when we did, I was thrilled. The Rayzor were just perfect and like nothing else we had in the show. We were able to deliver an exciting mini rock concert lighting rig on this flying unit that appears in a forest of layered trees.” 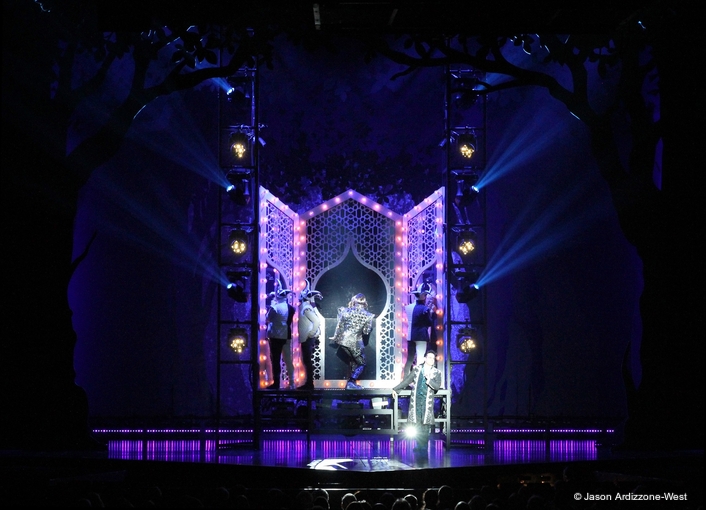 Prince Devin Flying Unit
Yael worked closely with Scenic Designer Jason Ardizzone-West on a special scenic unit that housed the Rayzor 760 units, which they dubbed the Prince Devin Flying Unit. “The overall aesthetic of the show is about indirect light and hidden light, but when this one character comes in the whole visual language changes,” Jason explains. “Prince Devin’s character is all about loving himself so we designed this rock 'n' roll, fly-in equipment truss that also was a huge vanity mirror with chasing vanity lights around it.” The Prince Devon Flying Unit was made up of a large platform fronted by two tall ladder trusses with three Rayzor 760 units mounted on each side. “As a set designer, I looked on the Rayzor lights as a piece of scenery,” he said. “What I love about them is that they’re beautiful to look at.”

The Rayzor fixtures alternated with profile fixtures to complete the rock 'n' roll feel. “The visual quality of the Rayzor units, what they looked like to the audience, was really special,” Yael states. “There was a great variety of  beautiful colors, and the unit is so versatile, but the SparkLED effect is really why I wanted them so much for the show.” The scenic unit served a dual purpose actually. With lights mounted underneath it, when up in the air it acted as part of the first electric.

Two numbers
The Rayzor fixtures were used in two big show numbers, each with a different feel. In the first act, the scenic unit flies in to reveal a rock star entrance of Prince Devin. He performs a concert with his entourage of jester dancers in the forest. Here the Rayzors are very active with a lot of movement and cueing.  In the second act, Prince Devin welcomes the audience to his Royal Ball accompanied by his back up boy-band jesters. The Rayzors start here with deep saturation and slow sparkle movement for a ballad and then shift later as the number transforms into a hip hop style number. 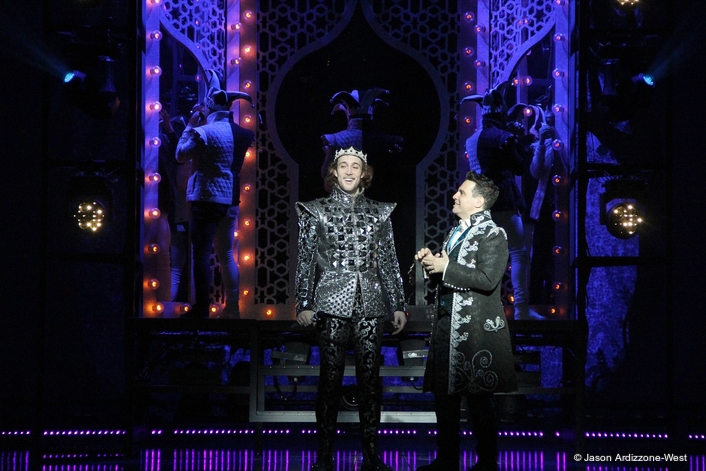 “The music style inspired how we used them, but the sparkle aesthetic was always an underlying symbol of his vanity as well as a visual texture background that also echoed the shimmering light reflection that was created by the fantastic costume design.” Yael adds that she didn’t have as much time beforehand to familiarize herself with the fixtures as she would have liked.  “Having the internal effects that we could grab quickly initially on the SparkLEDs was really helpful. To have a new unit on the show and not be able to spend a lot of time with it ahead of time can be hard, but we had a great team and our moving light programmer Stephen Graham learned how to use them very quickly and built us some really great effects in a very short amount of time.”

Yael reports that audiences response to the new take on a princess story every night was thrilling but also from a production perspective, the show was quite special. “I feel so lucky to have worked with this creative team,” she concludes. “The relationship between lighting and scenery was such an incredible collaboration and really depended on one another in a way I haven’t experienced on a project before.”

The Rayzor 760 fixtures were supplied for Bliss by lighting vendor Christie Lites.