Ayrton MagicPanel™-602 in the frame for Shania Twain 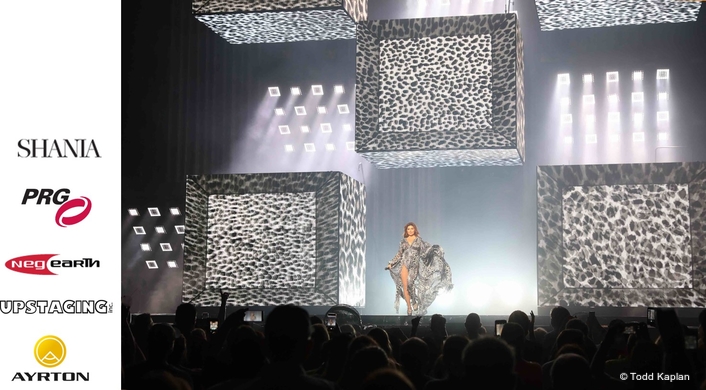 Canadian singer songwriter and all round ‘Queen of Country pop’, Shania Twain, is hitting the road with her long-awaited Shania Now tour. Twain has wowed audiences in North America and Europe this summer and autumn with her fast, exciting and ever-changing stage show. The constant motion and changing looks on stage are aided and abetted by Ayrton’s MagicPanel™-602 fixtures.

Creative director and lighting designer Rob Sinclair, and lighting director Michael Straun were very specific in what they needed to achieve the stunning visuals for this show which are based around five large, automated LED video cubes with dancer platforms placed on top.

Sinclair stated that, “Shania wanted a fast-paced show where the appearance of the stage and people constantly changed, with the band, the video cubes and the dancers in constant motion. We needed to find some square-faced lights to complement the square video cubes, and the MagicPanels were the perfect answer.”

In total, Sinclair used 100 MagicPanel-602 fixtures, cleverly and creatively setting them into five overhead pods each with 20 units arranged in a 5 x 4 configuration. The pods fit perfectly with the LED cubes, hanging behind and above each of them on automated winches. The video cubes variously carry singers, dancers, the drummer and other band members and can be deployed at different heights throughout the show to add to the overall spectacle. The MagicPanel pods also move up and down and can be angled into different formations so no two songs have the same arrangement of cubes and pods throughout the show. 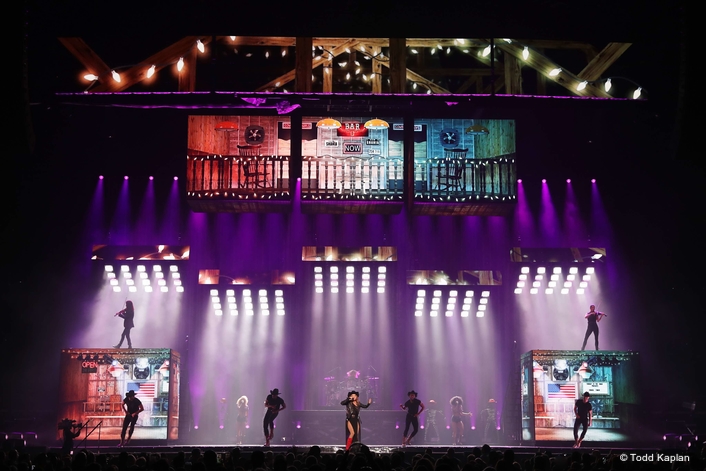 The MagicPanel-602’s square face with its matrix of 36 LED emitters in a 6x6 layout is in perfect keeping with the sharp lines of the LED video cubes and gave Sinclair a lot of options to work with. “They read as part of the same language,” he says.

The MagicPanel-602 are certainly put through their paces, being used to full effect for both colourful backdrop lighting, where they show off their brilliant depth and intensity of colour, and full-on bright illumination.

Straun expands, “We are able to use the pods as ‘big lights’ for dramatic illumination from above, adding to the scale and spectacle of the stage design. While the Ayrton fixtures give us the square design we require, we also make full use of their independently programmable pixels.  By using the MagicPanels in full pixel mode, we have the scope to use all the features of the fixture. We can use the individual ‘pixels’ to create shapes such as individually outlined squares on the face of the fixture, or larger squares that emulate the windows in one video moment, or circles and other shapes, colour runs and sparkle effects. The arrangement of the pods can add a strong linear structure to the architecture of the stage or be angled in a haphazard fashion the next. The only thing we don’t use for this show is the MagicPanel’s option for continuous pan and tilt.  We use an MA2 for programming and control, with 8-port nodes on the pods running the network directly to them.” 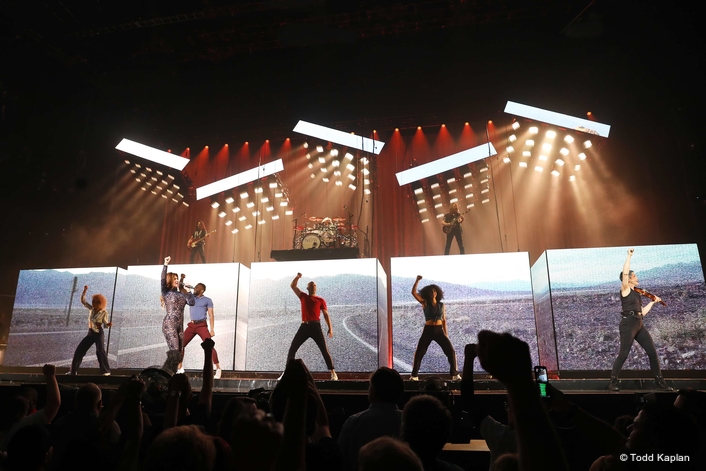 When asked how the fixtures toured, Straun confirmed they made set up and break down a much faster process: “The pods have the MagicPanels built into them. So, for freighting, they land on carts, split in half and roll into the truck. This means we are getting a lot of lights in the rig very efficiently and quickly and as long as they remain mounted straight, they are good at keeping their focus, so I don’t have to update any of their positions day to day.”

Sinclair and Straun are joined on the Shania Now tour by production manager Joel Eriksson, lighting programmer Andre Petrus and crew chief Mike Hosp. The Ayrton MagicPanel-602 fixtures were supplied for the US leg of the tour by lead lighting supplier Upstaging Inc, with Neg Earth Lights looking after the UK and PRG supplementing requirements in Australia.

Shania Now is Twain’s fourth concert tour in support of her fifth studio album Now (released in 2017). It is a huge spectacular which started in May and runs until December 2018. During this time the Ayrton MagicPanel-602 fixtures have enjoyed a lot of exposure, with 46 arena shows in North America, 1 in South America, 18 in Europe and 12 in Oceania. The final leg across Australia and New Zealand commences at the end of this month and concludes in Dunedin on 22 December 2018.