Adlib Round the World with Russell Howard 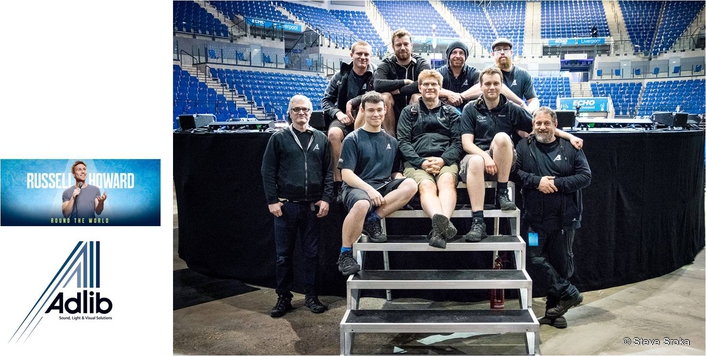 One man, one mic and one big mission-critical challenge to get it perfect every night - and that’s what Adlib delivered daily for the latest Russell Howard ‘in-the-round’ arena tour. Adlib, the Liverpool based company, supplied audio and lighting for the UK arena leg of the tour - the biggest to date for the highly-acclaimed award winning stand-up comedian who delights audiences worldwide with his intelligence, wit and hilarity. Adlib’s audio team was led by George Puttock who worked closely with Russell’s FOH engineer Simon Lawson. George specified a Coda Audio AiRAY system for a number of different reasons; its unrivalled light weight, its excellent sound quality and projection, as well as the precise horizontal control. The fact it is quick and easy to rig was an added bonus for the crew.

The core system comprised of eight hangs of 8 x AiRAY, with 8 x ViRAY downfills each. These were flown either side of four LED screens rigged at cardinal points about the stage.
Each day a completely bespoke variation of this system was rigged and optimised to suit the exact conditions and nuances of the room, to deliver the punch lines to every seat in the house.
Coda Audio’s Linus 10 amplifiers were suspended from an inner truss placed in a square behind the eight hangs, to facilitate neat cable management and short speaker cable runs. In addition to Coda Audio’s Linus Live control software, Adlib designed a bespoke power control and monitoring solution providing individual control and monitoring of each amplifier from the ground. “We couldn’t risk having any circuit breakers in the air, with the inability to reset them mid-show,” said Puttock. 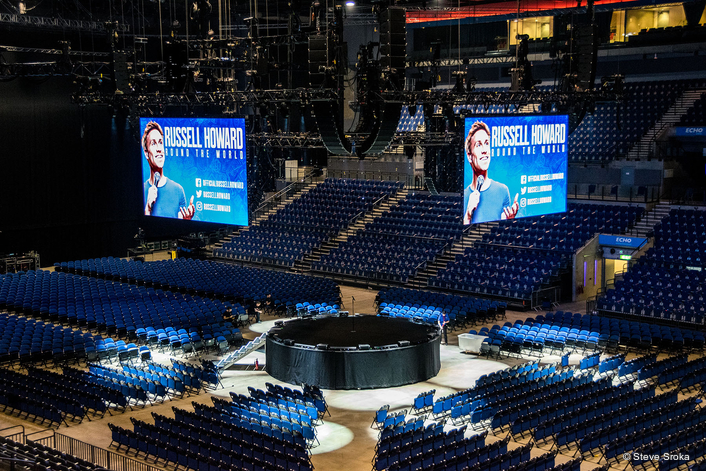 The screens & set before soundcheck

Audio was transported using Coda’s LINET signal distribution system, primarily for its absolute zero latency and high resilience. LINET was also perfect due to the long cable runs often encountered in getting to the centre of the arena from the control position.
All the processing and control was managed in the flown amplifiers; the signal being sent there from the DiGiCo SD9 FOH console. An SD11 was provided as a backup console, with a tried and tested Spirit Folio providing the ultimate backup for the completely discreet analogue backup system!
Russel Howard doesn’t use IEMs, so six Coda TiRAY were flown on the ‘East’ and ‘West’ sides of the stage for monitoring. Twelve more TiRAY positioned around the lip of stage provided front-fill, their tiny form factor being ideal for sight-lines and the cameras. 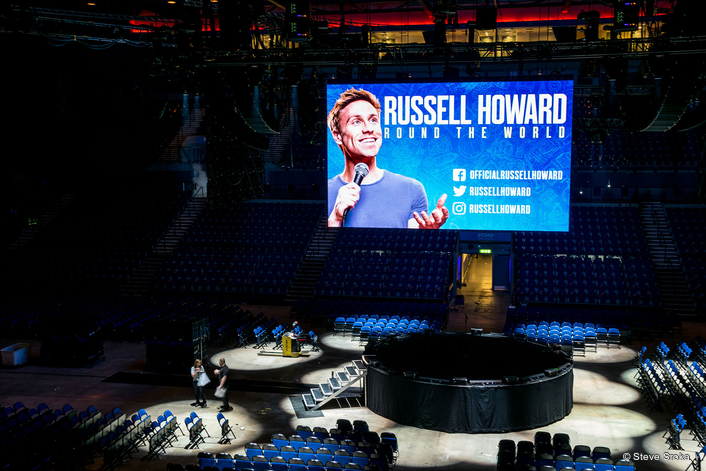 The artist specified his own mic which was a wireless Shure Beta SM58.
George worked alongside a solid Adlib team of Tony Szabo, Simon Lawson, Billy Bryson, Steph Fleming and Antonio Calvi. He engaged in a serious amount of advance work beforehand, knowing that all the venues were very different and the PA would have to change to suit day-to-day.
“Using this Coda AiRAY system was the best solution for this scenario because it’s SO predictable” he commented, “it does exactly what the software tells you it’s going to do and that makes for a very easy day on site”.
With this reassurance, he could concentrate on his first essential job each day; thoroughly checking the position of the rigging points and adjusting the ‘plan’ to take into account any unforeseen eventualities accordingly.
“Splendid and tremendous” commented Puttock, “It was a great tour, extremely well organised with harmony from all departments. The crew and the system delivered and there was lots of laughter throughout, both from the audience and from the crew!” 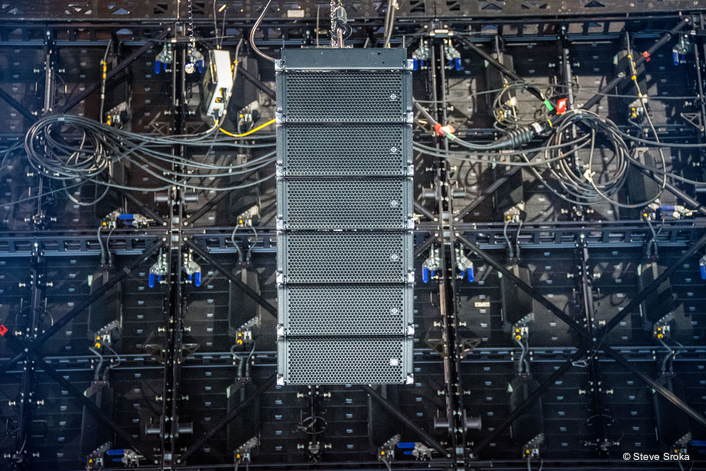 Lighting
A production lighting design was created by Adlib’s Ian Tomlinson which brought a clean, stylish, elegant look to the stage, and most importantly, was focussed on lighting Russell Howard for the cameras and IMAG relay. This was crucial as it allowed all of the audience to see the detail and nuances of his facial expressions as he delivered his gags.
The lighting crew chief was Charlie Rushton who also worked on the last Russell Howard tour, and not surprisingly, the challenge for lighting was getting all the necessary cabling from the middle of the room to the distros which involved anything from 20 metre to 80 metre runs … and some serious management.
Thirty-two sections of Prolyte pre-rigged trussing were used in total, 16 x 10ft. sections of S36PRA and 16 x 8ft. sections of S46PRT. Twelve of the 8fts formed a hexagonal shape with the addition of some custom spreader bars to make the angles correct.
Offstage from the hexagon were four front trusses one covering each of the four ‘sides’ of the stage, made up from four 10 ft. and an 8 ft. section in the middle. 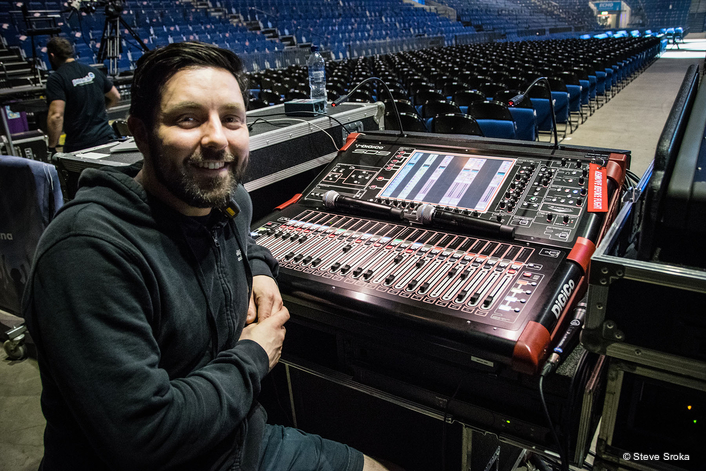 The moving lights on each truss were four MAC Viper Profiles, while four Chauvet STRIKE 4 LED blinders were pointed into the audience   … with a large gap in the centre of the four front trusses to facilitate CT’s IMAG LED screens.
On the six sides of the hexagon truss were four MAC Auras and two more MAC Viper Profiles.
Eleven Chauvet Colorado Batten 72 Tours were utilised for footlights around the edge of the stage ensconced in between each of the PA front-fills to warm up his face and fill some small gaps in the overall spread of lighting.
For follow spotting – an essential element in this set up – four Robert Juliat Merlins were specified and positioned out in the house at the quarter-points to the stage. One result of being in-the-round was the need to pull back on the intensity so these did not blind the audience members sitting on the opposite side to their throw path.
Lighting operator Tom Webber used a pair of Hog 4 Full Boars spec’d by Ian for control. 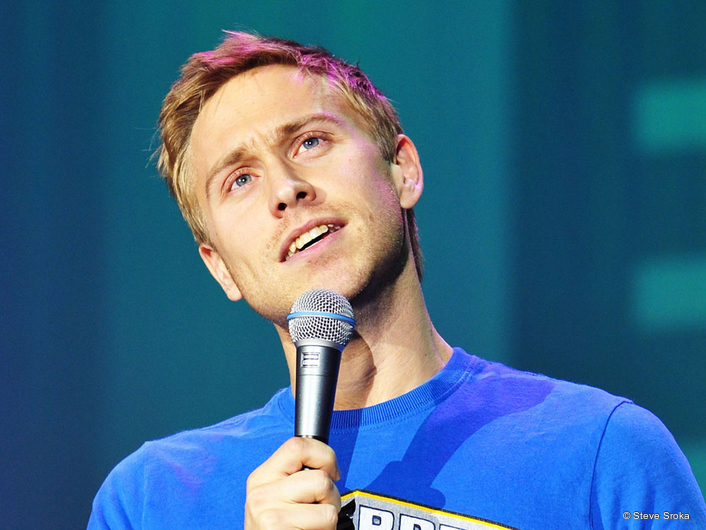 The opening involved some flashing effect which was fired and synched to timecode. There were two signature looks – one for the walk-in and one for theshow which were carefully constructed to give contrast. The show scene lighting was balanced to ensure that Russell Howard was well lit for all camera angles - and Ian Tomlinson had to have his DoP head on when he designed this as well as his LD one!
“We’ve had a lot of experience with lighting comedy shows” commented Charlie, “which is a great asset in getting the perfect mix for each different artist’s performance”.
Charlie and Tom worked with Adlib lighting technician Jon Barlow and dimmer impresario Jeff Bond.
All the data distribution was over ArtNet using Luminex nodes which were placed on the end of the cable bridge and broken out from there to feed the lighting on the trusses above the stage.

A wireless multicore was run to stage using a pair of Ubiquiti Bullets to create a 5 GHz WIFI network - one located on the cable bridge with the Luminex nodes and one under the stage with another node. The data comfortably travelled this height every day and the system proved very reliable as well as saved at least 30 minutes a day on cabling.
A GreenGo wireless comms was run out to the four follow spot positions, with the GreenGo antenna also sitting at the end of the cable bridge … which saved having to run out 400 plus metres of XLR daily!
A standard analogue TechPro comms system was used for the show as the distances made it more efficient to run cables for this element of the production.
Adlib’s Client Manager Phil Kielty commented, “We’ve had a really busy 2017 so far with lots of comedy projects on tour. It’s always good to push boundaries and we’ve also been thrilled with the results of the Coda PA in-the-round on this one.
“We’re fortunate enough to have been involved with Russell for nearly 10 years now! I first saw him performing at the Unity Theatre in Liverpool around 2007 and I am still a massive fan. Adlib thrives in a comedy environment and Russell and the team at Avalon all strive to be the best at what they do – so it’s a great match! Our thanks to James Taylor and Bjorn Wentlandt at Avalon and Tour Manager Kumar Kamalagharan for another excellent arena tour.”