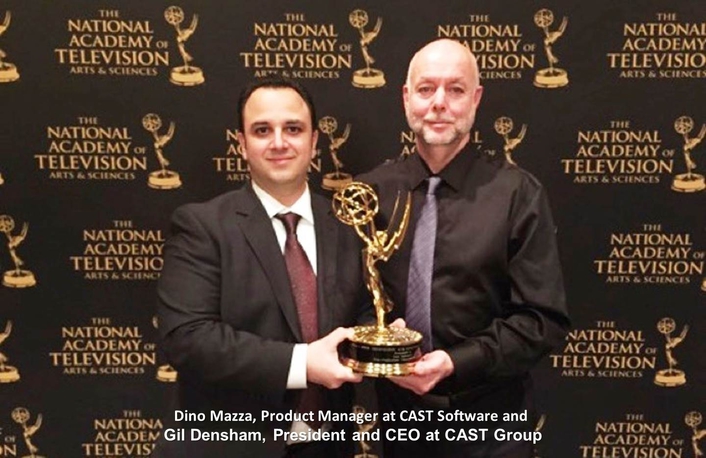 At a glittering, star-studded award ceremony at The Bellagio Hotel in Las Vegas, NV during the CES 2016 show, the team from CAST Software received their second Technology & Engineering Emmy® Award for wysiwyg in the Pre-Production Visualization System category of the 2015 Technology and Engineering Achievement Awards.

“We’re immensely proud of this honor and validation of our team’s commitment in continued technical innovation to help with TV and film productions,” enthuses Dino Mazza, Product Manager at CAST Software.

After winning its’ first Emmy®, CAST Software continued engineering innovative technologies and the advancement of wysiwyg, which today is the tool of choice for many of the world’s leading lighting designers as well as production and scenic designers.

wysiwyg is used not only to design and pre-program lighting and motion scenery but also previsualize video projections, LED video walls, lasers as well as to virtually simulate over 25,000 models of different production equipment to see how each can perform and behave when interacting in a realistic 3D environment. This ensures decisions can be made ahead of investment, making the production process more efficient.

“The award is recognition of wysiwyg users who use it as their go-to pre-production lighting tool for projects. They can now rely on a double Emmy® Award-winning pre-visualization tool for spectacular results in their lighting design,” concludes Gil Densham, President and CEO at CAST Group.

wysiwyg is available as 3, 6 or 12-month lease for purchase and free for all wysiwyg Members in good standing. Get it now at http://cast-soft.com/wysiwyg/release/wysiwyg-r36.

About CAST Software
Established in 1994, Toronto Canadian-based software and hardware developer, CAST Software celebrated its 20th year in business in2014. CAST Software serves its core markets in entertainment production, special events and meetings. Its award winning flagship software products are wysiwyg design and previsualization suite, and Vivien -- Event Designer. All products are designed and created in-house and supported by an established global distribution and reseller network.