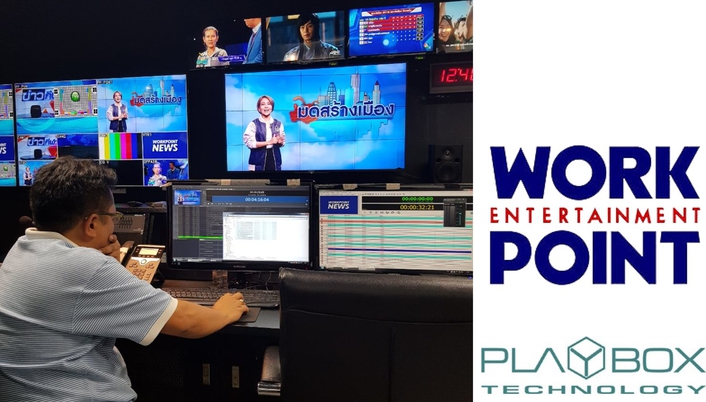 Workpoint TV, one of Thailand's leading digital television broadcasters, has enhanced its playout capabilities with the addition of latest-generation AirBox Neo and ProductionAirBox Neo from PlayBox Technology. Workpoint TV produces a wide range of content including news, music and variety programmes for transmission via the Thai digital television network, on satellite and online.

"Workpoint TV selected AirBox as the heart of its playout facility right from the start of test transmissions in 2011," says Apichart Prugtayanon, Project Manager at PlayBox Technology Thailand. "The new AirBox Neo and ProductionAirbox Neo are being used to handle outside broadcast coverage of concert stage events and sport, including live inserts which can be added easily between pre-scheduled events. The entire process from ingest to transmission is in high-definition."

"PlayBox Technology has proved a highly efficient and effective partner at every stage in our business development," comments Workpoint TV's Broadcast Engineering Manager Nopporn Muenkrathong. "ProductionAirBox Neo adds exactly the facilities we need to provide dynamic coverage of content coming in from our auxiliary studio and of events covered by our mobile production team."

"Operational flexibility has always been a key element of our design strategy," adds Don Ash, President of PlayBox Technology. "We are very pleased to see Workpoint TV using the extra muscle which ProductionAirBox Neo provides for fast content processing. High quality coverage of live events such as sport and late-breaking news are becoming increasingly important elements of broadcasting, giving channels such as Workpoint a definite advantage in their quest for high viewing figures."

ProductionAirBox Neo is a content playout system designed for use in a fast-paced studio environment. It has the low latency essential for broadcast news, sports and live production. A wide range of file formats and resolutions can be imported into the playlist, with up to 16 digital audio channels to accommodate multi-language programmes. The feature set also includes forward or reverse shuttle at up to 32x speed, mixing of different video resolutions and formats in a single playlist, logical content trimming plus support for a wide variety of compression standards and media containers. The NewTek Network Device Interface open protocol for IP production workflow is supported.