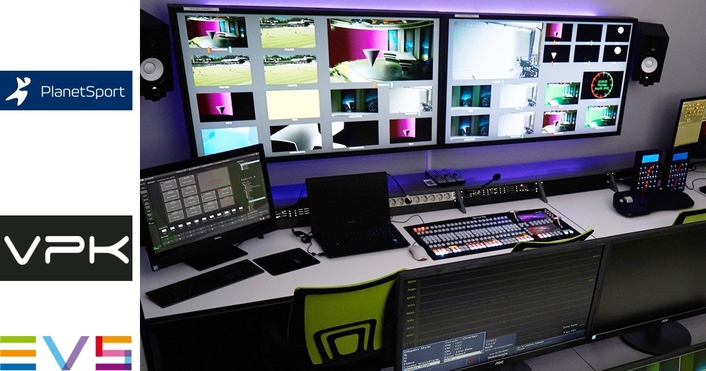 Independent television producer VPK PRO has deployed a DYVI live production switcher from EVS for the launch by leading telco VipNet of five new live sports channels in Croatia. The technology installation was put in place by VPK PRO, acting as technical partner, ahead of the roll out of the new PlanetSport channels which went live earlier this summer.

Part of the MEDIAPRO Group, VPK PRO is Slovenia’s largest independent television producer and is providing playout services in HD and UHD-4K, when needed for the new channels. The first deployment of the switcher in the Balkan region, DYVI is being used to output programming from the virtual PlanetSport studio.

The television producer needed a live switcher to complement what is one of the region’s most advanced virtual studios, which features three parallel Vizrt graphics engines for real-time 3D virtual and augmented graphics processing. With this graphics implementation, PlanetSport’s studio operations are complex and required DYVI’s software foundation to more easily manage all the graphics layering needed in each studio production.

VPK PRO’s Technical Director, Admir Budimlic said: “we were impressed with the possibilities that DYVI presents us. It was the natural choice for operations that are so graphics heavy because it’s easy to use even when we’re running these technically-ambitious productions. The programming that the switcher has enabled us to produce is of a very high quality and quickly began receiving praise from viewers at home.”

The DYVI switcher is key to PlantSport’s operations which include the output of the next three years’ worth of coverage of the UEFA Champions League. For the tournament, VPK PRO handles studio production operations for the PlanetSport 1 channel as well as local event production for the other four channels, using its fleet of mobile units.

We create return on emotion

EVS is globally recognized as the leader in live video technology for broadcast and new media productions. Our passion and purpose are to help our clients craft immersive stories that trigger the best return on emotion. Through a wide range of products and solutions, we deliver the most gripping live sports images, buzzing entertainment shows and breaking news content to billions of viewers every day – and in real-time.
The company is headquartered in Belgium with offices in Europe, the Middle East, Asia and North America, and provides sales and technical support to more than 100 countries. EVS is a public company traded on Euronext Brussels: EVS, ISIN: BE0003820371.