To significantly enhance its more than 200 hours of on-air live coverage of this year’s European football tournament, TV 4 Group, Sweden’s largest broadcaster, added a variety of graphics, video wall, and augmented reality technology systems from Vizrt, the leading provider of story production tools for the digital media industry. The goal was to launch a new visual style and excitement for its main sports studio, home to football fans across the country during the summer of football on TV 4.

The popular network’s new sports studio has been outfitted with a large panoramic 60 square meter video wall as a backdrop. Video and graphics for the video wall are being controlled by a Viz Multiplay software package that allows the production crew to display and arrange up to eight simultaneous HD outputs from a single Viz Engine real-time compositing and rendering engine. Vizrt’s Viz Virtual Studio software is also being used to add augmented reality graphics into the physical studio.

Improved coverage
“We are excited by what we have been able to accomplish with the Vizrt technology in our new studio,” said Erik Westberg, Head of sports TV4 Group. “By using the different Vizrt systems and having them work together seamlessly we could realize our creative vision with a reliable technology that really improved our coverage of the 2016 European Football Tournament.”

Viz Virtual Studio delivers augmented reality
The TV 4 Sweden technical team also implemented augmented reality elements to the set using Viz Virtual Studio, which is used in a variety of ways to support the on-air presenters. These virtual elements are driven by a stYpe tracking system mounted on a camera crane in the studio. The system does not require any additional external sensors or infrared cameras to deliver precise positional data of the camera in 3D space.

The new sports studio measures 40 square meters and consists of a 12x3 meter LED screen in the middle. Two additional screens measuring 3x5 meters wide are placed on each side of the LED screen. These are used to show other live games, player interviews and timely game-related data. 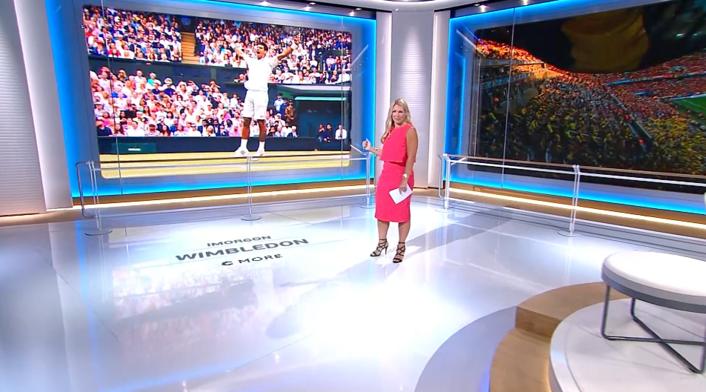 ‘Fresh, new look for viewers’
”Vizrt now has a very flexible virtual set and augmented reality offering that can transform any new or existing studio into a highly interactive presenter’s platform,” said Petter Ole Jakobsen, Chief Technology Officer at Vizrt. “At TV 4, they have done some amazing things with the studio, using their existing physical space and adding augmented reality elements to bring a fresh, new look for its viewers. This is a very cost-effective way to increase ratings and repurpose a single studio for multiple studio productions.”

Digital TV channels C More Sport and C More Fotboll are offering matches from TV 4 during the European football tournament. The coverage, which is bolstered by new virtual graphics solutions from Vizrt, also features studio analysis during half time.