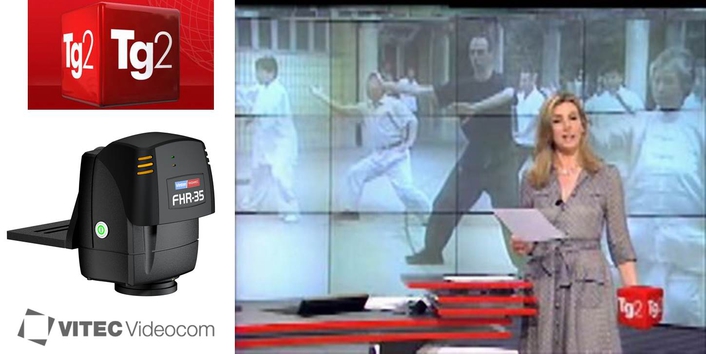 The new studio for Tg2, the flagship news programme on the Italian public service broadcast channel Rai 2, has been installed with a range of equipment from some of Vitec Videocom’s leading brands.

Products from Autoscript, Sachtler and Vinten Radamec, have been deployed in the recently launched studio, and are used to produce five dynamic daily news programmes for Tg2’s national and international audience.

The Vinten Radamec system comprises six robotic pedestals, including four of the latest Fusion FP188 pedestals, two additional next generation FHR-35 pan and tilt heads, and the company’s HDVRC control system with touchscreen monitor for the GUI (graphic user interface) and joystick panel. The robotics solution is complemented by four manual Sachtler Vario Ped 2-75 pedestals, equipped with Video 25 Plus FB fluid heads.
Two of Autoscript’s powerful and versatile prompting packages, +WinPlus-News+ software, have also been installed in both Studio A and B, interfaced with the newsroom system in Tg2’s central gallery.

Sergio Brighel, technical director, TAV, said: “The main challenge on this complex project was the extremely tight schedule, there was no margin for error because we had to be up and running in time for the  launch date set by Rai. The installation was completed in just over eight weeks and this period covers the initial planning right through to the configuration of the robotics system.

“We have a long standing relationship with many of the Vitec Group brands and have been installing and supplying the equipment for several years. Thanks to Vitec Videocom’s support, we were able to meet the deadline and provide the highest performing solution for the biggest broadcaster in Italy.”

Tg2 is the news brand for Italian state-owned television channel Rai 2, one of three broadcast TV channels operated by Rai. TAV is currently planning further installations incorporating equipment from Vitec Videocom brands across the Rai channels, these are expected to take place later this year.