TVN MOBILE PRODUCTION relies on Sennheiser: Always on the move and “DD ready”! 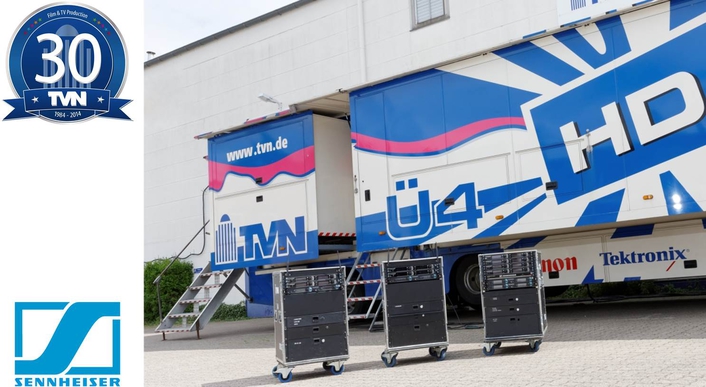 For many years now, TVN has been relying on wireless equipment from Sennheiser

The special trademark of German production company TVN is its fleet of outside broadcast trucks. Designed by experienced engineers, these trucks are used throughout Europe for producing sporting events, shows and concerts for television in optimum audio and video quality. Wireless gear of Sennheiser’s 3000/5000 and 2000 series ensures that the sound engineers are perfectly equipped to meet all challenges of national and international events – even under the demanding conditions posed by the second Digital Dividend.

The fleet of vehicles currently includes four 40-tonne tractor-trailers (OB truck and equipment truck), a six-camera SNG uplink truck based on a Mercedes-Benz Vario, a multi-purpose vehicle and various flightcase solutions that integrate OB truck technology into containers. TVN is active all around the world, and uses its own OB trucks throughout Europe. “The capacity utilisation of the individual vehicles is quite considerable,” said Stephan Thyssen, who has worked at TVN MOBILE PRODUCTION GmbH since 1998 and has been running the audio department since 2004. 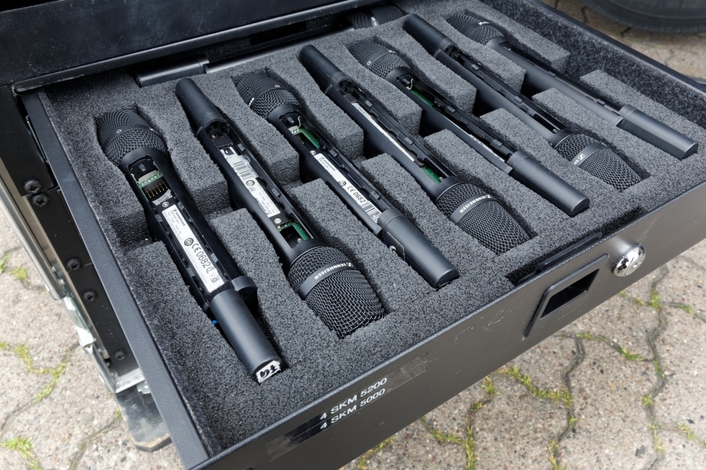 For decades now, TVN has been relying on wireless technology from Sennheiser. At TVN MOBILE PRODUCTION, the Sennheiser wireless components are installed in flightcase trolleys and transported in equipment trucks. Each tractor-trailer unit is equipped with 16 wireless microphone systems carried in three sturdy trolley cases.

The equipment includes what is known as “UHF Rack I”, which accommodates four EM 3732-II twin receivers, two SR 2050 IEM twin transmitters and an AC 3200-II active antenna combiner. The rack has drawers for the handheld transmitters (SKM 5200-II with cardioid ME 5004 or super-cardioid ME 5005 microphone heads), the bodypack transmitters (SK 5212-II with ME 102 or MKE 2 clip-on microphones) and the bodypack receivers (EK 2000 IEM) complete with accessories. “UHF Rack 1” is accompanied by so-called “Mini Racks”, whose name indicates their typical application in smaller studios. The racks are each equipped with two EM 3732-II, an SR 2050 IEM and all the necessary accessories.

Each trolley integrates Ethernet cabling and a WLAN router, and each main rack has a laptop computer running Sennheiser’s WSM software. On their arrival at a venue, the TVN technicians first establish an overview of the local RF conditions at the site using the Wireless Systems Manager and set up the Sennheiser system components accordingly. The results of the scans are logged and saved for future requirements. 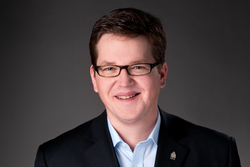 Digital Dividend II
One issue that is currently occupying professional users of wireless systems is the second Digital Dividend (“Digital Dividend II”). TVN was one of the first companies that were already prepared for Digital Dividend I at the time. “An early changeover was a strategic decision for us, as we also carry out highly sophisticated audio productions,” explained TVN MOBILE PRODUCTION’s managing director Markus Osthaus. “Our customers hardly noticed a thing. They could, and still can, expect absolute operational reliability from us.”

Thyssen added: “At the time, we asked Sennheiser to convert the frequencies of our approximately 100 wireless systems, initially to the segment between 670 and 740 MHz, which Germany’s Federal Network Agency had declared to be future-proof.” Nevertheless, he added, “We want to be able to guarantee reliable transmission in all conditions and on a permanent basis.”

TVN MOBILE PRODUCTION is already equipped to meet the new challenges of the frequency distribution resulting from Digital Dividend II, and has selected the frequency range between 470 and 638 MHz for wireless signal transmission, which will offer reliable operation for the foreseeable future. The frequencies of most of the Sennheiser equipment were converted in May 2015. In three batches, the transmitters and receivers were sent in, modified and then put back into operation. “Sent on Monday, back on Friday,” was Stephan Thyssen’s satisfied comment. “Everything went smoothly.” 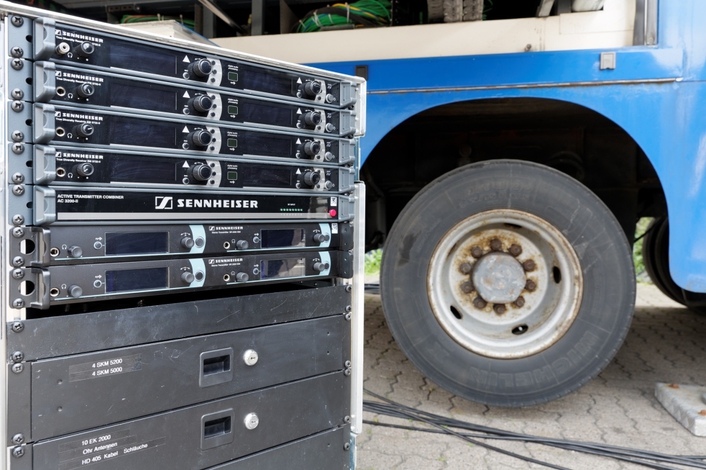 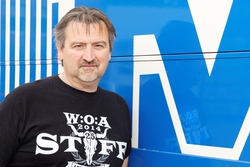 Many new receivers were also purchased. TVN MOBILE PRODUCTION is proud of its latest EM 3732-II twin receivers, which replace the older EM 1046 and EM 3532 models. “The new receivers have a large switching bandwidth of up to 184 MHz,” Stephan Thyssen enthused. The systems that work in the frequency range between 470 and 638 MHz have already been used at major sports events in Berlin and Warsaw.

Before the new Sennheiser products were acquired, an appraisal of the products available on the market was carried out independently of the manufacturer. “In the meantime, there are competitors that can build pretty decent equipment,” said Stephan Thyssen. The fact that the decision was once again made in favour of Sennheiser products is not only due to technical aspects such as their widely recognised reliable performance and excellent sound but also certainly has a lot to do with what Stephan Thyssen describes as the “fantastic cooperation” over the past decades and the close proximity to Sennheiser’s location in Wedemark. “We have been getting incredibly good support from there for years,” said Thyssen, expressing his positive experience with Sennheiser’s products and service.

Last year, TVN GROUP celebrated its thirtieth anniversary. It was founded by the publishing company Madsack in Hannover in 1984 to coincide with the introduction of the dual broadcasting system in Germany. In addition to its headquarters in Hannover, the group has several subsidiaries in Germany and Austria. In the meantime, the group includes seven companies, with divisions comprising corporate communication, television formats, film production, distribution, broadcasting, transmission technology and media specialists. 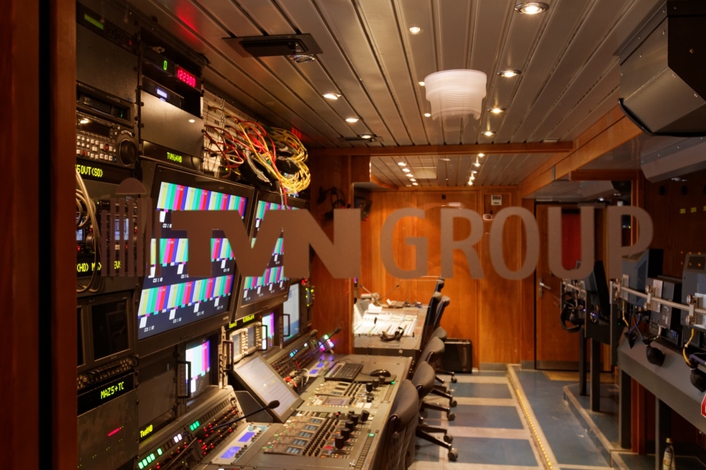 In 2014, the TVN GROUP celebrated its thirtieth anniversary

Audio specialist Sennheiser is one of the world’s leading manufacturers of headphones, microphones and wireless transmission systems. Based in Wedemark near Hanover, Germany, Sennheiser operates its own production facilities in Germany, Ireland and the USA and is active in more than 50 countries. With 18 sales subsidiaries and long-established trading partners, the company supplies innovative products and cutting-edge audio solutions that are optimally tailored to its customers’ needs. Sennheiser is a family-owned company that was founded in 1945 and which today has 2,700 employees around the world that share a passion for audio technology. In 2014, the Sennheiser Group had sales totalling €635 million.