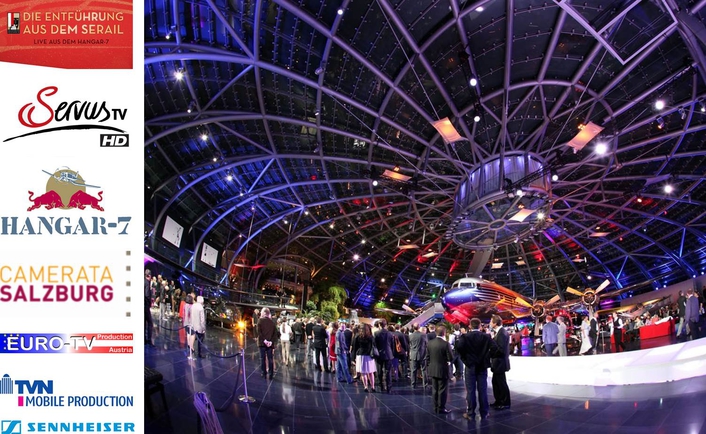 .
On 26 August 2013, the Salzburg Festival presented an extraordinary new production of “Die Entführung aus dem Serail” (The Abduction from the Seraglio) in cooperation with Austrian private TV channel ServusTV. Mozart’s masterpiece was transferred from the 18th century to the present day and was performed in the spectacular setting of Hangar-7 and Hangar-8 at Salzburg Airport. A Digital 9000 wireless microphone system from audio specialist Sennheiser was used to transmit the voices of stars such as Desirée Rancatore and Tobias Moretti.

Opera as a (TV) event
650 guests were present in Hangar-7, and they were able to move freely around the scenery and become part of the performance. To enable the audience to follow the opera – the orchestra was located in the opposite Hangar-8 – they were issued with compact MP3 players that received the opera audio signals via UHF transmission. The occasional noise from planes landing at the airport was integrated into the event. The images from several outside cameras portrayed the special scenario for the TV viewers. Appropriately, the escape from the Seraglio took place in a helicopter, in keeping with the extraordinary setting. 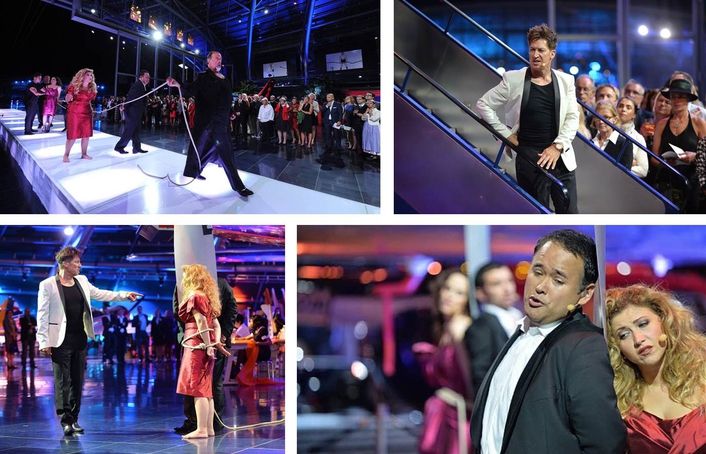 “Die Entführung aus dem Serail” (The Abduction from the Seraglio)

ServusTV broadcast the two-and-a-half-hour performance, which was recorded using 16 cameras, two steadicams and a cable cam system, both terrestrially and via satellite. The event was also streamed live on the internet. In addition, public screenings were held in Salzburg, Linz and Vienna, and viewers were also able to follow this modern production of Mozart’s work in 19 countries via UnitelClassica. 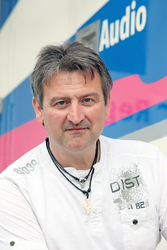 Audio was provided by German production company TVN MOBILE PRODUCTION GmbH as the cooperation partner of Euro TV Production GmbH. “Our team, which was made up of Austrian and German audio experts, responded to all the challenges of this exceptional production,” explained Stephan Thyssen, who has worked for TVN MOBILE PRODUCTION since 1998 and has headed the company’s audio department since 2004. “You have to remember that many of those involved as well as the performers are used to working in an opera house with an infrastructure that has developed over many years. So our job was to fulfil all the requirements even under the special conditions in a hangar.” 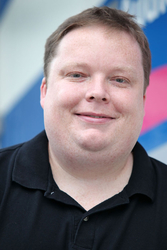 TVN MOBILE PRODUCTION was present on the grounds near the airfield with an outside broadcast van and an equipment truck. The audio from the OB van was mixed separately in a specially equipped audio container in which tonmeister and sound engineer Georg Burdicek (Tonzauber, Vienna) operated a digital mixing console and monitored the sound via five Neumann KH 310 A loudspeakers. In the control room of the OB van, a TVN staff member picked up the surround-sound signals supplied from the audio container, added the commentary as well as signals from atmosphere microphones and used them to generate various feeds for the broadcast sound.

Miking and IEM
The performance took place under technically challenging conditions over a total area of 13,700 square metres. The Camerata Salzburg conducted by Hans Graf played live in Hangar-8, while most of the vocalists performed in Hangar-7 on the opposite side. Both the orchestra and the vocalists were so far apart that they could neither see nor hear each other without electronic support.

The hangar doors in the direction of the airfield were not completely closed during the performance. According to Georg Burdicek, wind noise was not a problem, and the highly experienced sound engineer was also able to prevent reflections caused by the avantgarde architecture of the building from interfering with the audio signals by cleverly selecting and positioning the microphones.

The hangar doors in the direction of the airfield were not completely closed during the performance. According to Georg Burdicek, wind noise was not a problem, and the highly experienced sound engineer was also able to prevent reflections caused by the avantgarde architecture of the building from interfering with the audio signals by cleverly selecting and positioning the microphones. 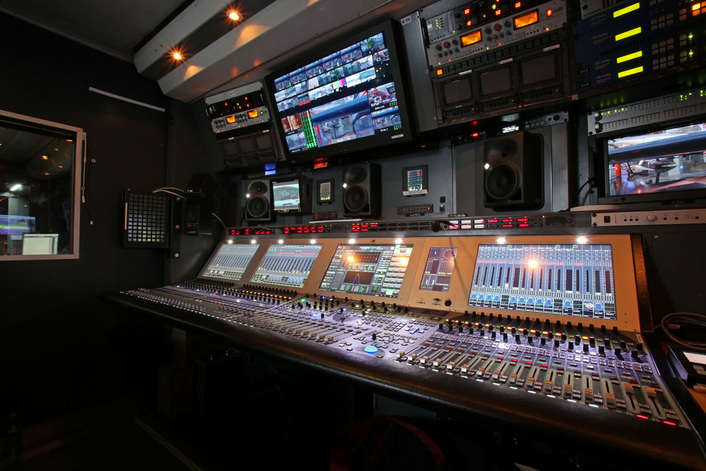 All of the spot microphones in the orchestra were Sennheiser MKH 8040 cardioid mics mounted on special signal-carrying bars and fitted with MZW 8000 double-layer windshields. “This wind noise protection is extremely effective,” said Georg Burdicek, who chose a Decca Tree for the main microphone set-up and provided the surround mix in a 5.0 format. Two Sennheiser MKH 800s were mounted on the rig in front of the orchestra as room microphones, while a cardioid Neumann TLM 170 R was used to mike the trumpets.

The conductor and the concert master followed the event acoustically via in-ear headphones which received their signals from a Sennheiser IEM system. The vocalists in Hangar-7 around 150 metres away were given their cues by three assistant conductors also equipped with IEM headphones, as the delay caused by digital video transmission would have led to timing problems if a purely image-based process had been used. The five soloists as well as one actor and two supporting actors were, of course, also equipped with wireless IEM systems. Individual monitor mixes were provided by a digital console located in the side area of the hangar. 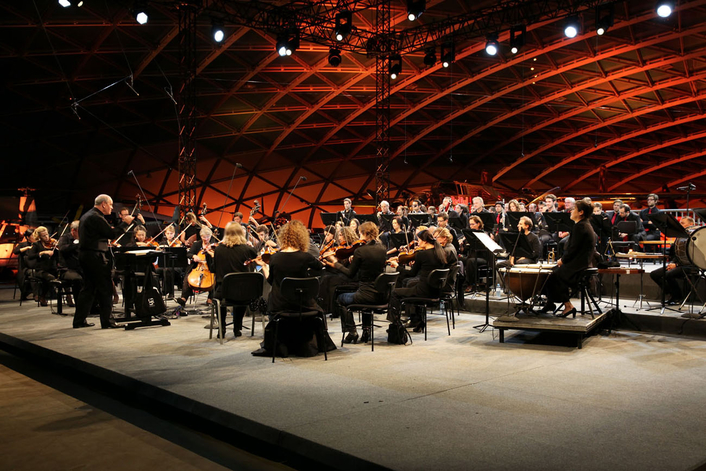 “The wireless frequencies were arranged in such a way as to avoid conflicts with LTE,” said Georg Burdicek. Stephan Thyssen added: “As we were directly at the airport, the use of frequencies was strictly regulated. Nevertheless, we managed to squeeze almost 40 wireless channels for audio transmission into a very tight area.” Particular attention had to be paid to air traffic control communication in the UHF range, while in the hangar itself the problem of harmonic waves had to be tackled. Transmission power was 50 or 100 mW, and 1W boosters were used. The technicians selected ground plane models (Sennheiser GZA 1036 TV) as receiving antennas, and these proved to be the ideal choice in the special environment of Hangar-7. 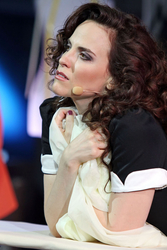 Digital 9000
A Sennheiser Digital 9000 wireless microphone system was provided for the soloists. A5000-CP antennas with AB 9000 antenna boosters were used as receiving antennas and distributed throughout the hangar. The production used six of the eight channels of the EM 9046 multichannel receiver, two channels were kept as spares. Each vocalist was equipped with two transmitters and a wireless IEM receiver. The soloists’ voices were transmitted in the usual double configuration, with the headsets being fitted with Sennheiser MKE 1 microphones.

When asked to make a direct comparison between analogue and digital wireless transmission, tonmeister Georg Burdicek replied: “There are significant differences particularly in the representation of the dynamics. It is a well-known fact that it is not easy to transmit the voices of opera singers, as their repertoire includes all nuances from very quiet to very loud. In critical passages, you can indeed sometimes hear the integrated compander system in analogue wireless transmission, while this is completely eliminated in a digital system.” Stephan Thyssen was also highly impressed by the excellent sound of the digital transmission technology in Salzburg: “When we build the next OB van with TVN, we will definitely install digital audio signal transmission using the Digital 9000 system from Sennheiser!“ 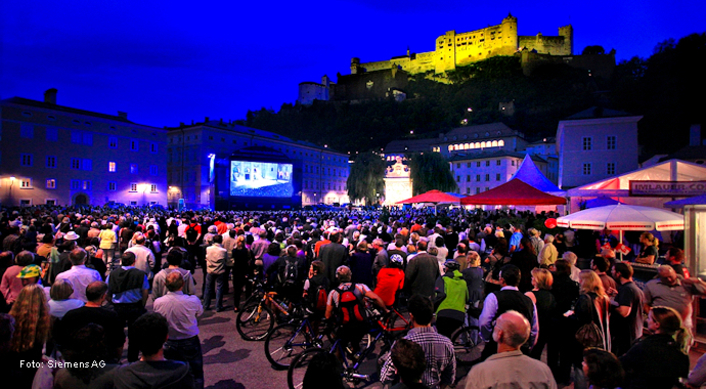