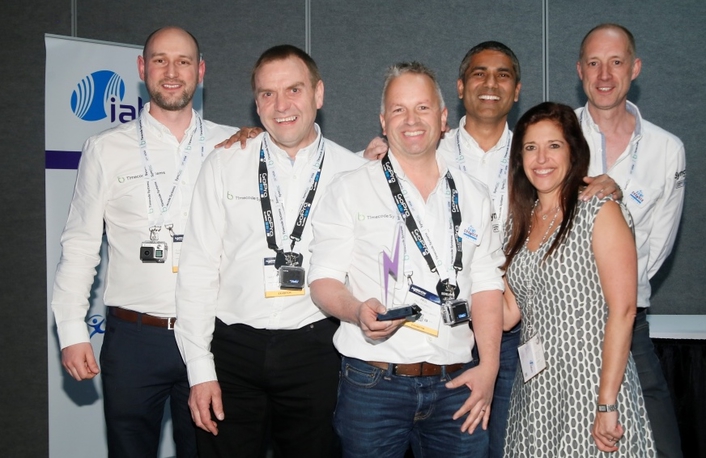 The IABM, an international voice for the broadcast and media technology supply industry, named the SyncBac PRO, Timecode Systems' newest product, an IABM 2016 Game Changer Award Winner. The latest accolade for Timecode Systems, a growing U.K. broadcast technology company, was announced at an awards reception at the 2016 NAB Show in Las Vegas.

The annual awards recognise products demonstrating forward-thinking and creative solutions to today's broadcast challenges. The IABM's judging panel selected the SyncBac PRO as the top entry for the Content & Communication Infrastructure category. The IABM judges were looking for products opening up new possibilities for the broadcast industry, and the SyncBac PRO is doing just this.

"From back in 2012, when we were just a very small team personally financing a great idea, we've always been committed to creating products that provide genuine innovation by completely breaking the mould," said Paul Scurrell, CEO of Timecode Systems Limited. "The SyncBac PRO represents an important leap forward in terms of streamlining production workflows, offering production houses using GoPro cameras the attractive prospect of saving time and money. This is what makes the SyncBac PRO a game changer, and getting the recognition of the industry for what we have achieved is hugely rewarding."

From its head office in Worcestershire, Timecode Systems has developed the SyncBac PRO, a clip-on timecode accessory for the GoPro® HERO4 Black and Silver cameras. By enabling the wearable cameras to generate their own frame-accurate timecode, the SyncBac PRO allows users to wirelessly sync multiple GoPro cameras or to wirelessly sync GoPro cameras with professional cameras and audio devices over long-range RF. It's a solution that integrates the GoPro camera seamlessly into the professional film and broadcast workflow, without time-consuming manual synchronisation of footage in post-production.

SyncBac PRO is the result of the unique access to GoPro toolkits offered through Timecode Systems' participation in the GoPro Developer Program. The company's timecode solution was one of only a handful of GoPro accessories to carry the new 'Works with GoPro' verification when the program launched at a private press event in San Francisco on April 14, 2016.

"The SyncBac PRO adds new functionality to our HERO4 Silver and Black cameras that's very valuable to our professional and prosumer user base," said Adam Silver, director of strategic product partnerships at GoPro. "The ability to sync footage in a multicamera environment highlights the potential for the HERO4 to work alongside more mainstream broadcast equipment and fully integrate into the television and film production process."

As a winner of an IABM Game Changer Award, the SyncBac PRO now qualifies as a nominee for the IABM's prestigious annual Peter Wayne Award for Design & Innovation. The award recognises outstanding technical achievement and will be announced in December 2016.

About Timecode Systems
Timecode Systems Limited designs and manufactures timecode hardware and software products that offer a reliable and user-friendly way to generate, sync, and share accurate timecode and metadata wirelessly over long-range RF and Wi-Fi. Whether a production includes one camera in a studio, multiple cameras, or a whole army of wearables or minicams on location, Timecode Systems products work together to offer television and film professionals a cohesive wireless workflow solution for syncing video and audio, centrally controlling devices, and sharing metadata.