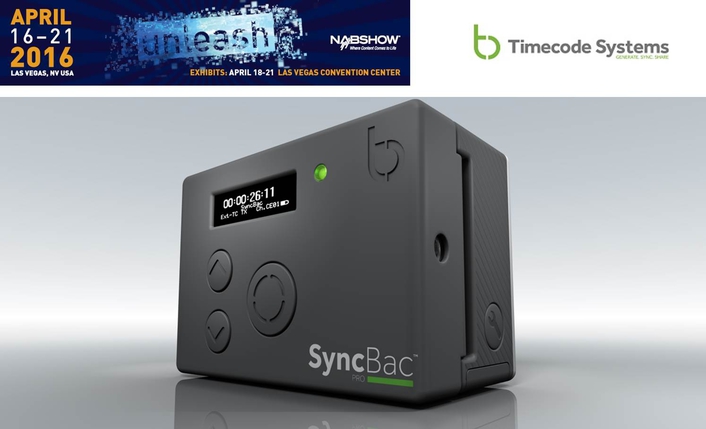 Timecode Systems, a pioneer in wireless technologies for sharing timecode and metadata, today announced the release of the SyncBac PRO, a customised GoPro® timecode sync accessory.

By enabling the GoPro HERO4 Black and Silver cameras to generate their own frame-accurate timecode, the SyncBac PRO creates the capability to wirelessly timecode sync multiple GoPros and GoPros with pro cameras and pro audio devices over long-range RF. SyncBac PRO is being launched at the 2016 NAB Show and will be demonstrated in the Timecode Systems booth, C2221.

Over the last few years, wearable cameras have become commonplace on professional film and broadcast sets. But since these cameras are not timecoded, the challenge has always been how to sync the footage captured not only with other GoPros, but also with pro cameras and pro audio devices.

"Until now, all we could do was advise production houses to visually slate using a digislate," said Paul Scurrell, CEO of Timecode Systems Limited. "It was a decent workaround, but it wasn't the seamless solution productions craved. What customers really wanted was timecode generated at source and synced over long-range RF, producing a single file with embedded timecode that postproduction can work with in exactly the same way as media extracted from more traditional professional cameras and audio equipment. This is exactly what we've delivered with the SyncBac PRO."

At the end of a shoot, SyncBac PRO users simply remove the SD card from their GoPro and hand the footage with embedded timecode to postproduction. The single MP4 file can be uploaded into the chosen editing package in the same way as media captured by large-scale, professional broadcast cameras and audio devices.

The SyncBac PRO neatly clips to the HERO4 Black and Silver cameras via the HERO Bus 30 pin port, with no requirement for external connectors. This keeps the GoPro as small and light as possible and ensures its full compatibility with HERO4 standard BacPac backdoor housings. The user simply clips on, switches on, and runs timecode to integrate the GoPro seamlessly into a Timecode Systems production workflow.

"The SyncBac PRO adds an important new capability to the GoPro — the ability to integrate into a multicamera film and broadcast workflow in the same way as larger- scale professional cameras," said Adam Silver, director of strategic product partnerships at GoPro. "This is not only an important tool at the point of shooting, but a powerful workflow enabler for postproduction — it could save hours in edit time, freeing up budget for the production and studios. Add to this the capability to wirelessly control and remotely monitor GoPros from a single application — now that's true innovation."

The GoPro cameras' compability with the entire Timecode Systems range of wireless timecode and metadata products also means that users now have the capability to wirelessly view, control, and monitor all GoPros on a shoot over long-range RF from a single application — the B:LINK Hub.

The B:LINK Hub is a new feature embedded within the Timecode Systems :pulse, a miniature base station for timecode and metadata. By connecting the SyncBac PRO to the B:LINK Hub dashboard via a :pulse unit, production teams can view, monitor status, and remotely control multiple GoPros from any smartphone (iOS or Android), tablet, Mac®, or PC. This, among other things, unlocks the capability to adjust camera settings and record start/stop remotely — a great way to maximize a GoPro's battery life when the camera is gear-mounted or not easily accessible.

At the 2016 NAB Show, Timecode Systems is inviting delegates to visit booth C2221 to experience this exciting new technology and see how it integrates with the entire Timecode Systems range to create the company's most cohesive workflow solution to date.