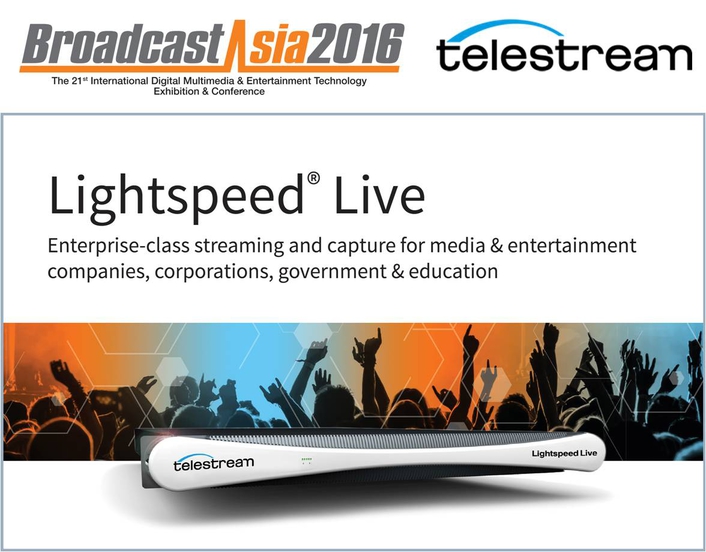 Forming the centerpiece of its technology showcase, Telestream’s Vantage® media processing platform is the foundation for a broad range of enterprise-class transcoding and workflow automation software products that allow content owners, producers, and distributors to quickly, easily and efficiently ingest, edit, transform, package, monetize and distribute their media. 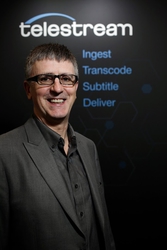 Telestream developed Lightspeed Live Stream in response to increased demand among news, sports, and special event broadcasters to simultaneously push live programs OTT. Lightspeed Live Stream encodes a live program at highest quality and simultaneously streams the output via an origin server or CDN.
The Lightspeed Live Capture application can also be installed on the same server to simultaneously capture the source video into Vantage for further processing. Until now, file-based and siloed systems demanded a more serial workflow.  By closely integrating the latest parallel file-based open workflows in Telestream’s Vantage platform together with the combined CPU/GPU power of the Lightspeed Live server and applications, the fastest possible delivery of all assets is realized.
Another new addition to the Vantage platform taking its APAC regional bow at Broadcast Asia is an Adaptive Bitrate (ABR) Optimization feature that can significantly reduce delivery bandwidth needs and costs within multiscreen distribution applications. This advanced feature can achieve real-world bandwidth reductions of 25-40 per cent whilst maintaining a premium viewing experience through high quality media distribution.

In the world of multiscreen media delivery, Content Delivery Network (CDN) costs are a significant issue for broadcasters. Whilst traditionally they are used to fixed distribution costs, irrespective of viewing audience, this is not the case when distributing via CDN. These distribution partners charge on a “per-bit, per-viewer” basis, so the more multiscreen viewers, the higher the cost of distribution. Therefore, the ability of a product to produce high quality images at lower bit rates is a major consideration.

Another APAC debut from Telestream at Broadcast Asia is Timed Text Flip within Vantage: a new closed caption and subtitling service that meets even the strictest internet and TV broadcast mandates for captioning and subtitling delivery. Advanced automation capabilities enable content to be processed faster before being seamlessly integrated into existing Vantage workflows.
An integral part of the Vantage Media Processing Platform, Timed Text Flip can provide captioning and subtitling capabilities in the cloud with Telestream Cloud.

A fourth innovation from Telestream, which was developed with APAC broadcasters and production facilities in mind is Vantage Open Workflows, which the company developed in response to increased demand amongst news and sports broadcasters for OTT services to support multi-screen media distribution. The goal is to provide the news at the same lightening fast speed across a range of devices outside of traditional TV. Within a file-based workflow this presents a challenge since the core data file must be transcoded into several formats in order to be distributed across this broad and ever increasing range of mobile devices.

Vantage Open Workflows enable the user to start generating output before file input is completed. While the idea of performing actions on a growing file isn’t new, Vantage Open Workflows takes this capability to a new level by enabling multiple Vantage Actions such as Watch/Copy/Flip/Compute to simultaneously be working on a file as it is being ingested. This capability reduces processing time and empowers broadcasters to automatically access content as soon as it starts to enter the file-based workflow and before file ingest is completed. Consequently, the ability to deliver TV broadcasts and multiscreen content simultaneously becomes an achievable, cost-effective task.

“We arrive at Broadcast Asia with a number of strategically important new product innovations that will enable APAC broadcasters and facilities to work more effectively, more efficiently and more profitably within a multiplatform environment,” stated George Boath, VP International Sales, Enterprise Products at Telestream. “These practical, real-world advances enable users to enhance and clearly differentiate their multiplatform OTT services at the same time as creating really significant savings in their operational and content delivery cost structures.”