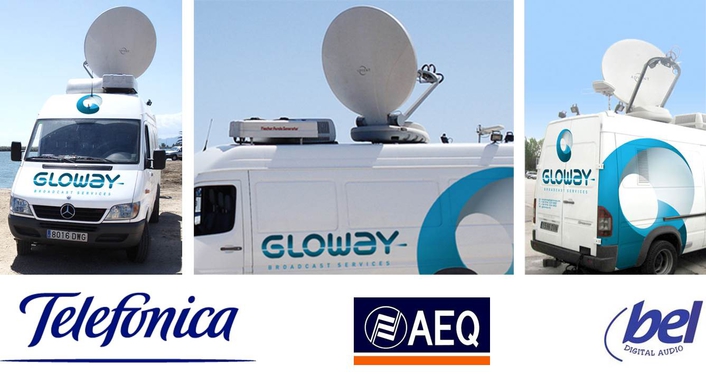 .
Spanish satellite relay and outside broadcast truck operator Gloway has purchased multiple units of Bel Digital Audio's latest 1U 3G audio and video confidence monitors, for use in its fleet of vehicles.

Eleven of Bel's BM-AV1-E16SHD 16 channel audio and video monitors are installed in the trucks of leading Spanish broadcast transmission services company Gloway, who are part of the Telefonica group. The sales were conducted through Bel’s long-standing Spanish distributor AEQ and five of the units went into new build DSNG trucks with the remaining six going into existing vehicles.

Eduardo Guerrero, AEQ’s International Sales Manager “We were delighted to work with a company as highly regarded as Gloway to help supply the equipment to outfit their trucks. When we showed them the versatility offered from a single 1U device they were immediately convinced. As trucks and DSNG units get smaller, compact units like these become ever more desirable”.

The audio source to be monitored is selected by a simple rotary control and is then displayed on high-resolution tri-coloured LED barographs (in two banks of 8 channels) providing long term reliability. Selected audio channels are also provided as AES-3id and analogue outputs to the rear. Analogue output levels can be fixed or controlled by a front panel control. An integral audio mix system enables any audio channel to be routed to either left speaker, right speaker, left+right or not at all. An active mix matrix ensures that a constant mix level is maintained.

A Dolby® decoder is included in the BM-AV1-E16SHD as standard. When enabled, it can decode Dolby E, Dolby Digital and Dolby Digital Plus material from any of the AES inputs, or from embedded audio data within the SDI bitstreams. Eight Dolby mix-down algorithms are available directly from a front panel rotary control. Comprehensive metadata reporting is also provided via the  display.

All eleven vehicles with the Bel BM-AV1-E16SHD units are now in service. Gloway provides services to major Spanish broadcasters such as TVE, Canal +, Mediaset España, Sogecable, Cuatro, Antena 3 TV and many others. The trucks are being used for a wide variety of productions including major sporting events including live football and tennis.