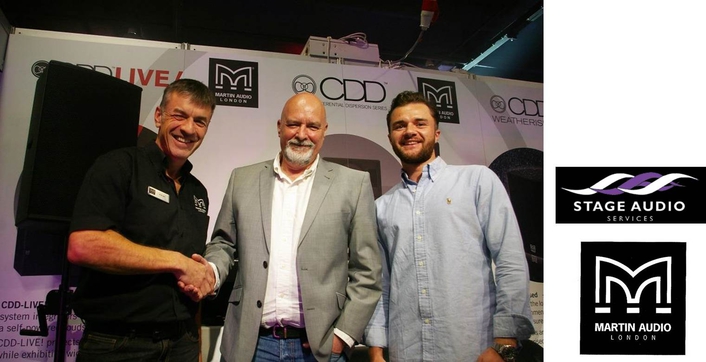 When Kevin Mobberley set up his West Midlands based rental company Stage Audio Services at the beginning of the 1980s, the mainstay of his PA inventory consisted of Martin Audio’s classic B1, B2 and legendary MH212 ‘Philishave’ components.

Fast forward 35 years and the wheel has turned full circle as the company has placed the first of what will become several tranches of investment, in the High Wycombe manufacturer’s new MLA platform.

They have acquired a substantial MLA Compact rig (including MLX subs) promising that this will be the start of a steady upgrade path into both Martin Audio Multicellular Loudspeaker Array and Differential Dispersion technology (with the DD12).

Explaining the timing of the new MLA acquisition Kevin Mobberley said, “With the outdoor season approaching we were getting asked increasingly by our clients to investigate MLA. The system is coming up on riders and frequently being specified by festival organisers, promoters and production managers, as much for its site containment ability as its sheer power.”

One of these was South West Audio, who wanted the system for the John Peel Stage at this year’s Glastonbury Festival, having experienced the system on the main Pyramid Stage over the past few years.

Mobberley also credited Martin Audio dealer, LMC Audio, and in particular Tim Bamber for their heavy promotion of the system in the early stages. His mind was soon made up. “Martin Audio was a company with a technical support team that I felt I could work with and form a great relationship with. It’s good to be back in the Martin Audio family after so many years.”

In summary, the production company’s MD says, “One of the real beauties of MLA is that it is a complete turnkey system — you don't have to worry about packaging and therefore it is easy for a rental company to manage.

Stage Audio Works technicians have already attended the three-day MLA certification training course in advance of the season ahead.