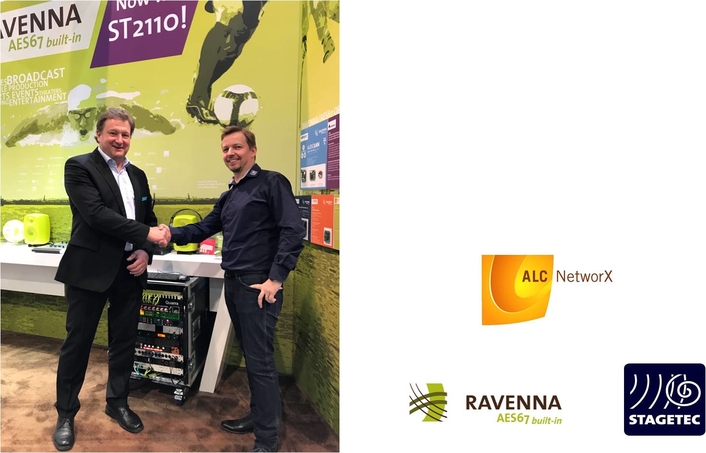 In an announcement made at both NAB and ProLight&Sound 2018, Stage Tec has become the latest manufacturer to join the RAVENNA partnership. The Berlin-based manufacturer of professional audio mixing consoles and routers is one of the leading pioneers in the transition from analog to digital audio technology. In the 25 years of its existence, Stage Tec has set new standards in digital technology with continuous development and innovation.

“With our engagement in RAVENNA we are pleased to be able to offer an even wider spectrum of IP solutions to our customers”, explains Helmut Jahne, CEO of Stage Tec. We have been providing IP-based technology since 2012 with the NEXUS Dante card XDIP. With the launch of our RIF67 Router Interface in 2017, Stage Tec also offers IP audio transport via AES67. A second interface card to be introduced this year, the NEXUS Fiber and IP Interface (XFIP), will also feature full AES67 compatibility. Both cards are also fully RAVENNA-compatible.”

Andreas Hildebrand, RAVENNA Evangelist at ALC NetworX, adds: “We are delighted by Stage Tec’s decision to join the RAVENNA community! Stage Tec has long been a pioneer in the world of digital mixing and routing technology and with their proven NEXUS technology, the company is clearly among the premium suppliers of distributed digital routing systems. By adopting AES67 through the implementation of RAVENNA, Stage Tec underlines the importance of offering standards-based flexible interfacing options. Using the RAVENNA open networking technology will guarantee future-proof operation in the ever-increasing diversity of network-based application requirements.”

Stage Tec was established in 1993 by 13 engineers, most of whom still work for the company. Stage Tec is headed by Dr. Helmut Jahne, who was one of the founding members of the team and who continues to drive the technological supremacy of the product lines.

Today, Stage Tec offers a comprehensive range of products ranging from the smallest to the largest of mixing consoles.

About RAVENNA:
RAVENNA is a technology for real-time distribution of audio and other media content in IP-based network environments. Utilizing standardized network protocols and technologies, RAVENNA can operate on existing network infrastructures. RAVENNA is designed to meet the strict requirements of the pro audio market featuring low latency, full signal transparency and high reliability.

While primarily targeting the professional broadcast market, RAVENNA is also suitable for deployment in other pro audio market segments like live sound, fixed installations, and recording. Possible fields of application include (but are not limited to) in-house signal distribution in broadcasting houses, theaters, concert halls and other fixed installations, flexible setups at venues and live events, OB van support, inter-facility links across WAN connections and production & recording applications.

Unlike most other existing networking solutions, RAVENNA is an open technology standard with no proprietary licensing policy. RAVENNA is fully compatible with the AES67 and ST2110 standards. Liaisons with standards organizations and industry alliances (e.g. AES, AIMS, AMWA, SMPTE and others) ensure the close alignment of RAVENNA technology with current industry trends.

About ALC NetworX GmbH:
ALC NetworX is an R&D company in Munich, Germany, whose team of highly regarded pro audio experts with in-depth knowledge of networking technologies developed the RAVENNA technology platform. While ALC NetworX will continue to keep the lead role in the RAVENNA technology development, product implementations are executed by individual partner companies, such as Archwave, Genelec, Lawo, Merging, Riedel, Sonifex and others.

As you like it: New virtual control panel for STAGETEC’s AURATUS
Astro to Adopt Loudness Standards with STAGETEC
CP and STAGETEC MADI Connect Two NFL Games of the Week