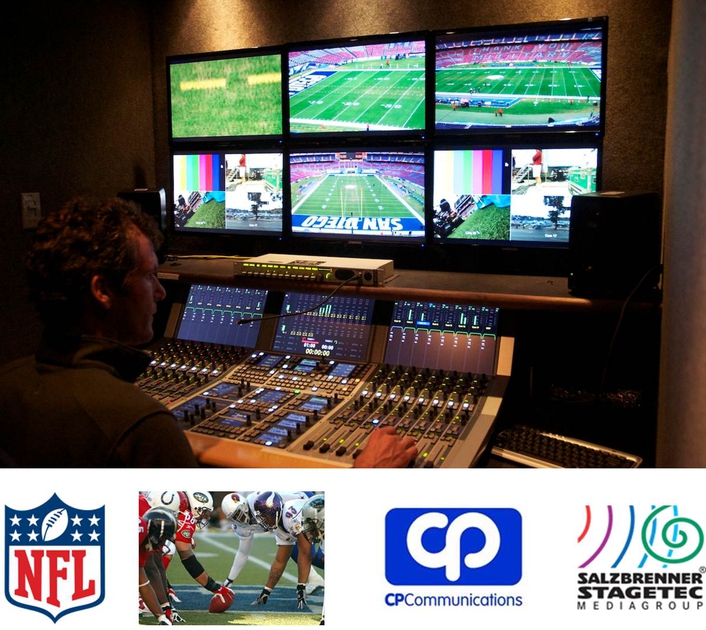 AURUS, CRESCENDO and NEXUS Systems as strong partners in NFL Broadcasts
Both NFL Monday and Thursday night games now have CP and STAGETEC systems in place for the television broadcast audio submix and fiber optic connectivity and routing. The Monday night game includes an AURUS console for audio submixing of all field, crowd and camera mics, and a NEXUS system to transport all audio and control signals including the intercom control data (RS485) and 4-wire from the truck bay to the booth and field.

The NEXUS also connects the trucks via fiber and MADI so that the main production truck can grab the announcer’s mics and whatever other signals he needs in addition to the submix. Connections between the mobiles, booth and field devices are via single strand single-mode fiber.

NFL Network broadcasted their first game of the season from San Diego, November 10, 2011 (and will continue every Thursday night for the rest of the season) with a NEXUS base device on the field and a STAGETEC CRESCENDO audio console connected to the NEXUS router in the audio submix unit. With a base device in the RF receive field rack connected to the compound via fiber and connecting to both the main audio production and submix trucks, the NEXUS transports the sounds on the field from the RF racks and parabolic microphones for use back in the compound as well as all 4 wire needed for communications on the field.

At the helm of the submix console, the CRESCENDO, is Robert Qua who took to the system rather quickly. “It was not only my first time mixing on a STAGETEC system but also my first NFL submix. I jumped on the CRESCENDO system and was impressed how quickly I was actually up and running and getting what I needed out of the system”.

CP Communications SVP of Sales and Marketing is very impressed and pleased with the system. “We made a commitment to and a valued partnership with STAGETEC and they have proven to be the right fit for this industry. With today’s complicated sports shows you need the flexibility and scalability of the STAGETEC systems” says Kurt. “We now have two system operating and shining on two major NFL telecasts and we think this is just the beginning for the outstanding technology.”