Sound and Light Get the BMFL Trend 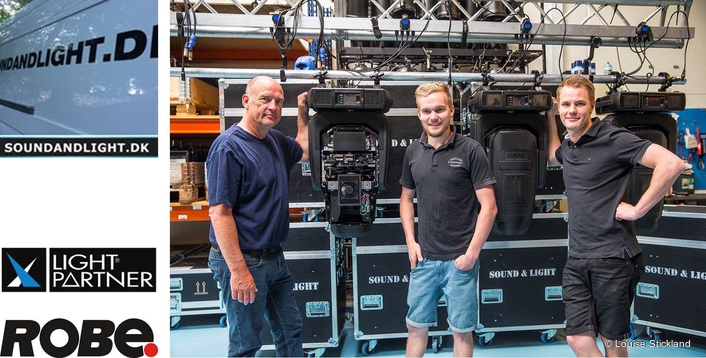 Sound and Light is a busy rental company based in the bustling port and university town of Aalborg on the edge of the gently rolling, lush countryside of Jutland, north Denmark, and a recent investor in Robe’s BMFL Spot moving light fixtures. Focused on servicing the top end of the entertainment lighting market - incorporating TV productions, corporate events and industrials plus installations - Sound and Light was founded in the 1980s by Jess Otzen.

Due to its reputation for excellence and incredibly well maintained stock, looked after with much love and attention in their pristine warehouse on the outskirts of the city, Sound and Light also engage in a healthy cross-hire business to most other major rental players in Denmark.

Both Robe purchases were prompted by market demand and because the Pointes and the BMFL Spots “fitted their needs perfectly” explained Jess.

It was also a big move ... as until that point for the last 10 years, the company had stocked only one brand of moving light!  “It was absolutely the right time to bring a new look to the market,”  confirmed Jess.

They had been looking at the BMFL range for a while after the success of the Pointes, when two separate high profile TV shows – The TV2 Christmas Show and “The Playlist” broadcast on national TV channel 2 on New Year’s Eve - were confirmed, and BMFLs specified by LD Mikkel Moltzen. Both shows staged at Aalborg Musikkens Hus.

It was the high output and the general functionality of the BMFLs that initially made them look at the product.

“They are a premium product so that was one of our requirements, but also we strongly believe that ‘less is more’, and investments like this where you can get more creativity and impact using fewer fixtures is really ideal for us!”

This is another way that Sound and Light keeps itself a little different – by not just following the mainstream for the sake of it … they like to set their own trends!

Fredrik Lisborg, Sound and Light’s head of lighting – who started as an intern six years ago and worked his way to the top of the department - adds, “Yes, the potential creative scope of the BMFLs is what we looked at, the great gobos, the in-air effects that can be produced and generally also because they are really becoming increasingly requested by all the LDs we are working with”.

He also mentions the good overall design and look of the light, the easy dismantling for maintenance, plus other technical elements like the touch screen display, all a big hit with the crews. “All our technicians are very happy” he reports, together with reliability, a MUST for any rental operation.

Fredrik is also a lighting designer and he has really enjoyed having the BMFLs to hand to use on some of his own shows.

These have included on the Opera Stage at the 2016 Aalborg Karneval  … there was no flying opportunities, so they were on floor stands at varying heights. He also used them at the 2016 Nordals Musikfestival in Nordborg, featuring a plethora of popular Danish touring acts over two days.

“We see more and more bands touring Robe fixtures in their own production and specials packages”. 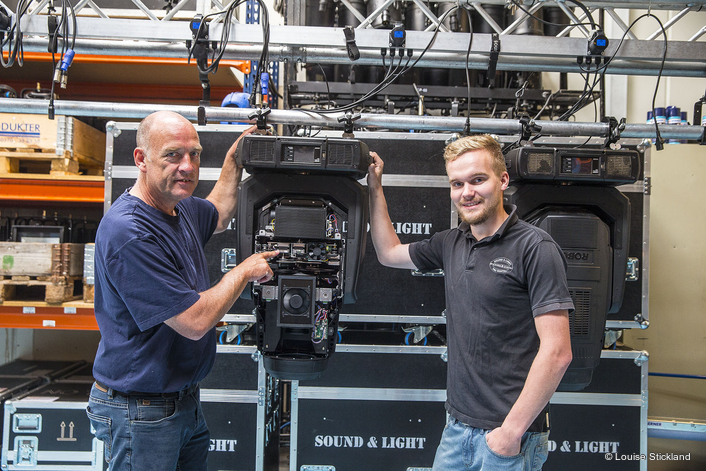 Jess chips in with, “Robe is still essentially the ‘new kid on the block’ as a quality manufacturer, but as the great standard product ranges there’s still a real spirit of adventure and wanting to push forward constantly”. He loves to see people “enjoying using and working with these fixtures” and the fact that there are ever more opportunities to work with Robe.

Jess was working as a mechanical engineer and a keen musician when he returned to the  sound and lighting industry on a professional basis, taking on the task of co-ordinating his own and other band’s technical requirements. The band invested in good sound and lighting kit to help their shows stand out ... which were coveted by many other local artists!

He formed a company to take care of all this equipment, and ran it as a serious hobby for a while … before getting head-hunted to work as a service engineer on a consultancy basis for a well-known (then) Danish moving light brand, whose office was in Frederikshavn at the time!

That relationship also signaled the start of the ‘lighting’ department of the still nascent enterprise - which became Sound and Light at this point.

They have now added video to the portfolio to cover all three main production disciplines.

The decision to be a top end operation was made at the outset, and it's one of the principles which Sound and Light has rigorously adhered to in terms of quality of equipment, crew and services.

There are now 7 full time employees plus regular freelancers and the company is busy working nationwide and in nearby countries. While the market in Denmark is highly competitive, Sound and Light also enjoys a good relationship with other rental companies and champions a holistic, inclusive and interlinked model of business that considers others more as 'colleagues', an approach which has fueled success, built respect and enabled ‘good terms’ to be enjoyed by everyone.