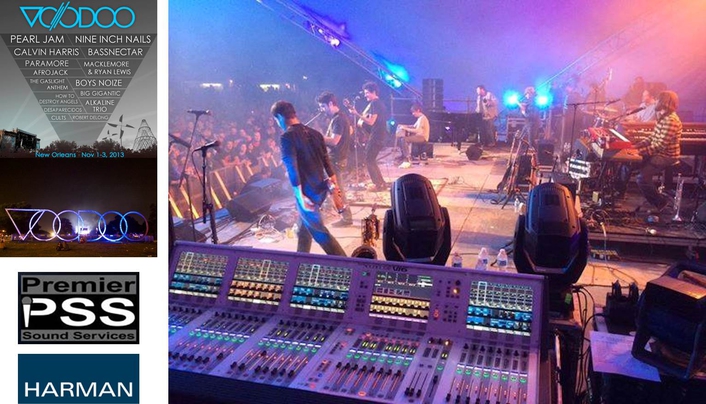 .
The third time’s the charm, as Baton Rouge, Louisiana sound company Premier Production & Sound Services, LLC (PSS) found out when it supplied the sound reinforcement system for the Voodoo Experience festival for the third year in a row. The 3-day festival featured a dazzling array of more than 80 artists and more than 100,000 people at New Orleans’ City Park were treated to an epic sonic and musical experience, courtesy of HARMAN’s JBL Professional VTX and VERTEC® line arrays, Soundcraft digital consoles and Crown amplifiers.

Stage sound was furnished by 16 JBL SRX712M floor wedges, plus 12 VT4886 loudspeakers and six VT4883 subcompact subwoofers. All the loudspeakers on stage were powered by nine Crown IT 4x3500 HD amplifiers.

“This was our third year of working on the Voodoo Experience festival and our second with the JBL VTX Series line arrays,” said Russ Bryant, PSS Director of Operations and Co-Owner. “The sound was absolutely awesome. At a large-scale outdoor rock festival like this, the demands on a loudspeaker system are tremendous in terms of the sheer SPL and coverage required—and the V25 line arrays are phenomenal in their ability to deliver clear sound even at high volume, with pristine, effortless headroom especially in the upper midrange and high frequencies.”

The Crown IT 4x3500 HD amplifiers also made life easier for PSS. “Having four channels in one amp allowed us to significantly cut down on the amount of cabling we needed and save a lot of time and labor,” he pointed out. “We are very happy with the flexibility they offer and the fact that they can be optimized for use with VTX and VERTEC loudspeakers using their V5 DSP presets.”

Anyone who has mixed sound at festivals with dozens of bands can attest that smooth transitions between acts are crucial. “We wound up using the Soundcraft Vi6 consoles for 31 front of house and monitor changeovers,” said Bryant. “I can tell you that the Vi6 was much easier to use than other consoles that were at the festival,” noting that in addition to its superior sound quality, the Vi6 is laid out very much like an analog console, which made it easy for visiting engineers to step right up and start mixing. Another big advantage: “The Vi6 still passes signal while you’re loading show files into it where some other consoles will not, which is a major benefit during the hectic time constraints of a big festival.”

Bryant concluded, “There were four total stages at Voodoo Experience 2013 and we had many people coming over from the other stages telling us that our stage sounded the best.”