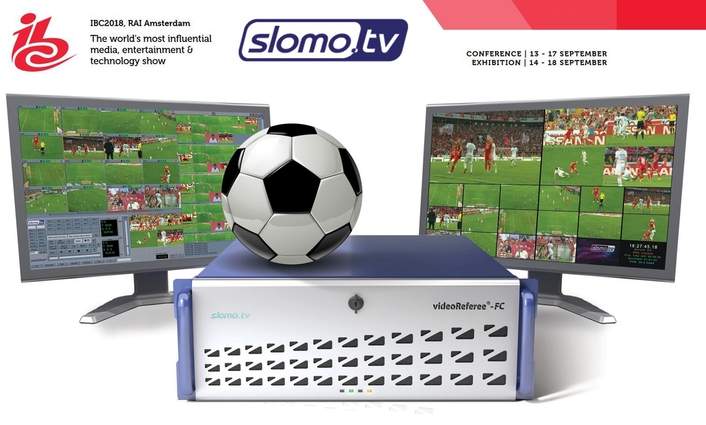 On its booth (8.B40) at IBC 2018,  slomo.tv, a leading international supplier of cost-effective, high performance server-based video recording and replay systems, will introduce a complete integrated video assistant referee (VAR) system based on the latest generation of its videoReferee® FC. The system, which has been used for many years across sports such as ice hockey, basketball and handball has now been adapted to accommodate soccer’s recently introduced FIFA obligatory requirements.

Designated videoReferee® FC, the compact 4U video server records up to 24 3G/HD channels and has four graphics outputs. It has a separate multi-viewer for all channels capable of displaying live and delayed video.

Video inputs can be displayed from a single camera, in Quad view (four cameras) or in multi-viewer format for off-site situations. Also, it is possible to quickly perform and prepare analysis of an on-pitch incident at the assistant’s work place (AVAR) and transfer it to the main on-pitch (VAR) system for referees to review during the match.

SDI output for integration within a stadium’s broadcast network.

“As we witnessed at the recent FIFA World Cup Finals, VAR technology can revolutionize live sports, taking a lot of pressure from the referees who operate in extremely stressful environments,” commented Michael Gilman, CEO of slomo.tv. “Our new version of videoReferee is already creating interest in the world of soccer and we believe it will interest numerous other sports administrators and broadcasters.”