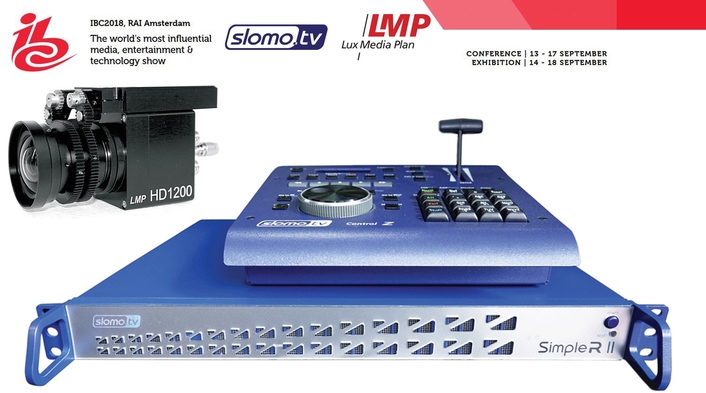 The compact mobile solution has generated interest from rental companies that frequently need to move from one installation to another with minimal time for build-up and break down. The system’s form factor is so compact that one Simple RII server and two HD1200 mini-cameras can be transported within standard size case.

The key advantage of the solution is the ability to install LMP’s HD1200 via SMPTE Fiber cable in places that are unsuitable for conventional cameras, such as goal mouth corners in football, and on the jump infrastructure in high jump competitions.

The 1U Simple RII is the market’s most compact SSD-based broadcast grade instant replay server. It supports 662 configuration (6Rec+6Search+2Play) for HD and 442 for 3G signals. It has a wide range of options, including SuperMotion, NLE and videoReferee® application. An intuitive user interface and control panel make the Slomo.tv server easy to understand and operate. Also, it has three graphics outputs and can record and store up to 266 hours of 100MBit HD video.
IBC visitors can visit LMP Lux Media Plan’s stand (10.F21) to experience slomo.tv’s and Lux Media Plan’s joint solution.

About LMP Lux Media Plan
LMP is a leading supplier of innovative serial digital solutions.
Since 1986, the German-based company has been developing standardized and custom-made applications for notable clients in Europe, the United States, Asia and the Middle East.
Over 30 years of experience in motion picture production have rendered LMP a most insightful and versatile partner for sophisticated TV, video and audio productions. LMP’s high-quality solutions meet the individual requirements of a broad spectrum of clients including broadcasting corporations, film and TV productions, R&D departments of universities and companies active in medicine, aviation or security. The range of products comprises customized devices as well as proprietary developments and single items manufactured to specification.

About Slomo.tv
Established in 2007, the company has successfully introduced complete lines of high quality multi-channel professional recording and instant replay products. Slomo.tv has brought to market a number of effective solutions for video production technology. Slomo.tv systems, such as Dominator and Simple R, are widely used on major TV channels, and the company’s video judging system for sports, videoReferee®, has become an integral part of many sport arenas worldwide.