The studio is a complete virtual set with flexible functionality that also enables the use of augmented reality and it utilizes Vizrt’s Viz Engine for real-time 3D graphics.

TV 2 Norway wanted a new and improved weather studio with more flexibility, allowing them to move away from the traditional weather forecast to one that would allow forecasts to be delivered in a livelier, more engaging way by bringing to life phenomena such as snowstorms, avalanches and hurricanes. A further requirement was to make the weather studio appear larger than it actually is by using a virtual set. 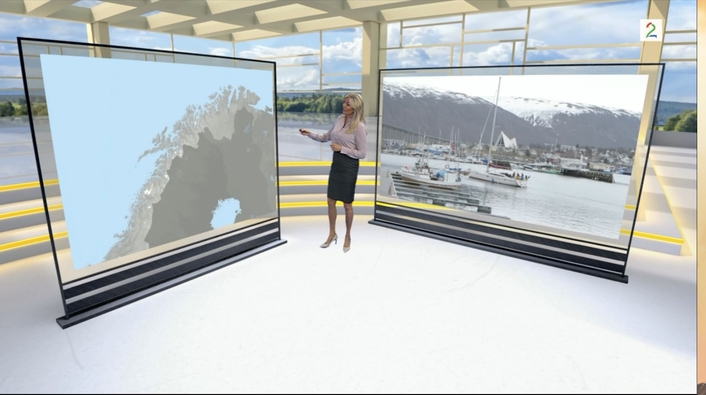 “The new studio combines a traditional virtual set with augmented reality, meaning it gets the best of both worlds,” said Kjetil Horneland, CEO at Sixty. “Augmented reality also allows the weather show to be broadcast from outside the studio for events and special occasions, giving the broadcaster significant flexibility. Like many other broadcasters, TV 2 is looking to increase viewer engagement in everything it does – and that’s where we at Sixty excel.”

“Sixty’s solution adds more flexibility when creating the content for our weather forecast,” said Eivind Netland, Head of Design, News/Sports/Current affairs at TV 2. “Our viewers will enjoy both the design and the visual experience being restyled by Sixty.”

This is the first time that Sixty has created a complete virtual set to be used together with Electric Friends robotic cameras. These cameras deliver accurate mechanical tracking of the physical room and enable automatic camera movement that can be triggered together with the graphics, making it easy for the producer to control the advanced content of the broadcast.

About SIXTY
Sixty empowers broadcasters, operators and content owners to stand out in the rapidly changing, competitive world of multi-platform TV with solutions that make TV look good and feel right to demanding global audiences. Developed by teams of graphic, broadcast design professionals and developers – a talent pool unique to our industry – Sixty wraps content in a compelling look and feel to drive viewers to broadcasters’ programming. Sixty enables easy implementation of interactive TV, and allows users to quickly design and launch television experiences across any platform or device including linear, web, mobile phones, and tablets. Based in Norway, Sixty innovation creates the Future of Television by delivering rich TV Experiences that make a critical first impression on all-important viewers.