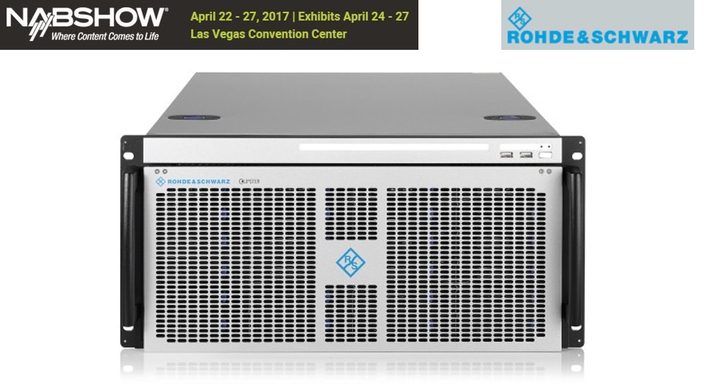 At NAB2017 in Las Vegas, Rohde & Schwarz will showcase its power pack for DCI and IMF mastering. R&S CLIPSTER is already the market leader in high-quality film production finishing. Version 6.2 of this solution with UHD HDR mastering and 32-bit floating point processing offers even higher performance. R&S CLIPSTER 6.2 is versatile in post production and supports the most diverse workflows. Customers from TV and film production and distribution especially value the system’s reliability.

The accelerated hardware allows realtime processing of videos up to 4k120p. The new version’s optimized architecture makes it possible to use new codecs and formats, including Dolby Vision Cinema, OpenEXR 4k60p, QuickTime HDR and Avid DNxHR®, while reading and writing HDR metadata.

Content producers and distributors can offer their viewers the best representation of the creative intent in the theater or at home. "Viewers today want to become fully immersed in a film and completely turn off the outside world for a few hours," says Stefan Weidner, Director of Media Market Segment at Rohde & Schwarz. "Our customers from film and television production therefore highly value excellent video quality. Our R&S CLIPSTER DCI and IMF mastering solution delivers this quality at full color volume and with the highest possible resolution for global distribution."

Studios, film and television producers and television broadcasters benefit from the option of finishing and mastering premium content in 4k/UHD and HDR. R&S CLIPSTER 6.2 allows QC playback via SDI, DisplayPort and HDMI, so that the creative intent is retained on every display, every TV screen and every cinema screen.

R&S CLIPSTER 6.2 and other highlights from the broadcast and media specialist will be showcased at NAB in Las Vegas from 22 to 27 April, 2017, in South Lower Hall at booth SL1205.