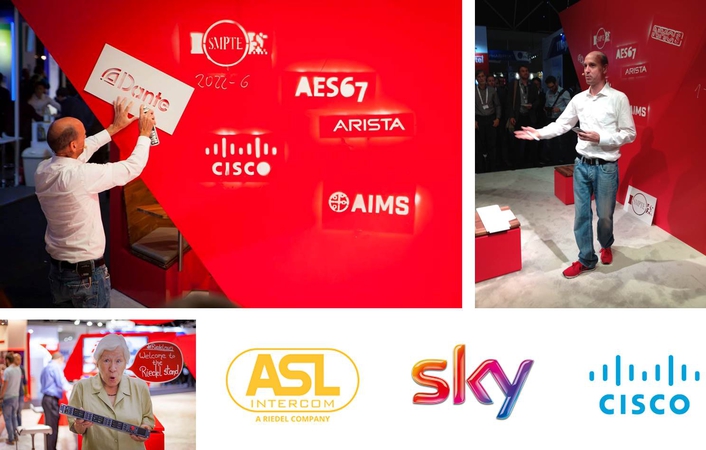 There was no chainsaw involved in his presentation this time — the power tool having made a memorable contribution to a press call at NAB 2016 — but Riedel Communications founder Thomas Riedel’s IBC Day 1 media briefing was highly eventful nonetheless, with news of multiple acquisitions and a significant corporate partnership.

In recent months, Riedel has moved to acquire two intercom manufacturers, ASL Intercom BV and DELEC, with confirmation of both deals taking place at IBC 2016.

Based in The Netherlands, with a heritage stretching back more than 30 years, ASL Intercom’s flagship ASL FLEXUS system is notable for allowing multiple standards — Dante/AES67/AVB and RAVENNA — to coexist in a single system. Riedel Communications will maintain the ASL Intercom brand identity going forward, while founder and MD Eric de Bruyn will stay on in his current role. 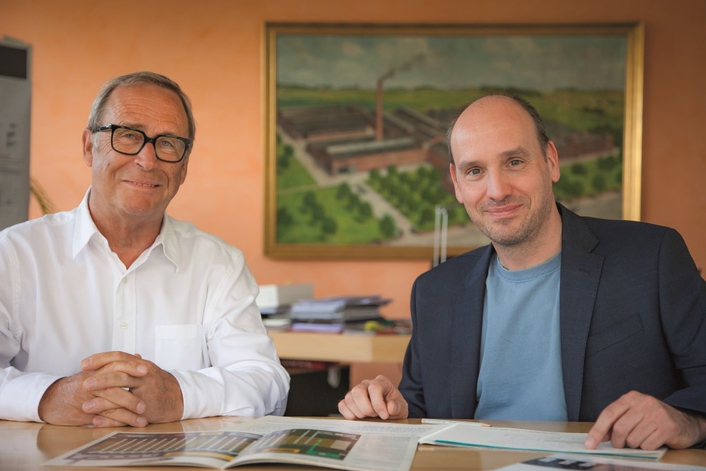 "ASL Intercom has a strong portfolio in digital partyline technology, and the company's products adapt readily to a wide variety of applications, both small and large," said Thomas Riedel, CEO at Riedel Communications. "Intercom applications remain a core element of our business, and we are confident that we'll quickly be able to leverage the complementary technologies of ASL Intercom to serve an even broader array of customers that can benefit from exceptional communications systems."

DELEC Audio- und Videotechnik GmbH’s track record is similarly extensive, and today the company has a notable presence in stage management and live-entertainment intercom, thanks to products including the oratis intercom systems, unito Dante audio-networking interfaces, and digital PA systems.

"DELEC has long been known for its visionary ideas and strong technology, and the company's products complement and augment the Riedel portfolio in a way that will bring even greater versatility to our customers," said Thomas Riedel, CEO at Riedel Communications. "The entire DELEC team will become part of the Riedel family, and this is exciting news not only in terms of our ongoing development of high-end solutions, but also for our growing customer base — including current DELEC customers. Together, we're better positioned than ever to provide forward-looking solutions that address current and future communications requirements, and we are committed to providing existing DELEC customers the great service Riedel is known for." 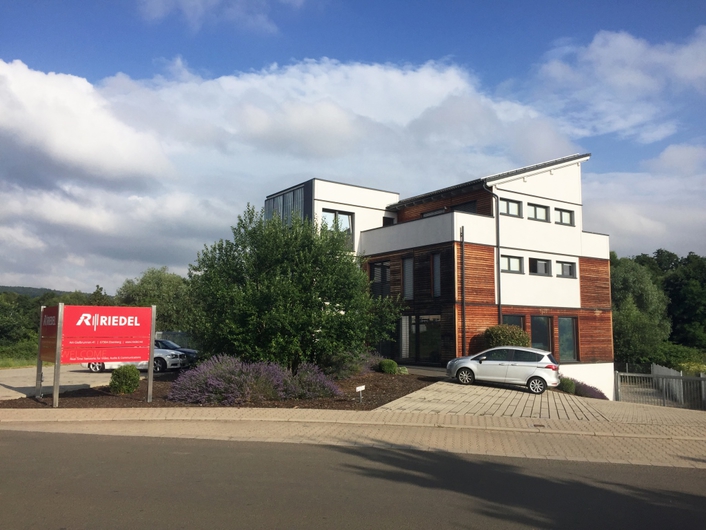 Since it was established in 1988, DELEC has evolved into a supplier of digital intercom and communication systems to broadcasters all over the world, in both fixed installations and outside broadcasts. The flexibility, comprehensive functionality, and compact dimensions of DELEC products — most notably the company's oratis intercom systems, unito Dante audio networking interfaces, and digital PA systems — have also made them ideal for stage-management and intercom systems at many large venues for live entertainment productions.

“It’s all about ensuring interoperability and our products talking to each other,” proclaimed Riedel of another significant development: the company’s new agreement with Cisco, whereby they can explore new ways to use the Cisco Media Blueprint platform to enhance their respective businesses. The agreement creates a framework by which Riedel and Cisco can explore collaborative opportunities.

“At Riedel, we have been embracing broadcast and IP standards across our product lines for many years now,” said Jake Dodson, director, product management, Riedel Communications. “So, when it came time to look at how we were going to continue our innovation across an evolving synchronized IP fabric, Cisco was the obvious choice of a great company to partner with.” 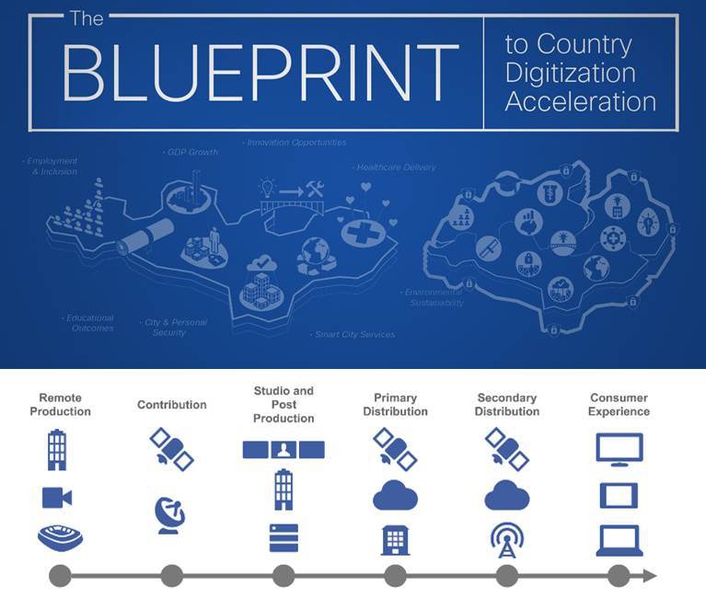 The Cisco Media Blueprint platform automates the process of moving massive amounts of media content to the right people, at the right time, in the right format. This digital media logistics platform is an IP-based, virtualized combination of solutions and network infrastructure that removes the barriers between content production, storage, and distribution. The result is a broadcast production and distribution environment in which innovation is as easy as adding off-the-shelf Cisco networking equipment or deploying a new application within a virtual machine. Available today, these applications increase efficiency and enable new ways to generate revenue in a rapidly evolving media landscape.

There was also a significant new product announcement in the form of the MediorNet Control App for the RSP-2318 SmartPanel multifunctional user interface. In addition to linking the SmartPanel directly into the Riedel MediorNet media network as a dedicated control panel, the new MediorNet Control App — in combination with the existing Intercom Apps — gives users simultaneous intercom functionality, enabling them to route, control, and communicate all at once using a single 1-RU system. 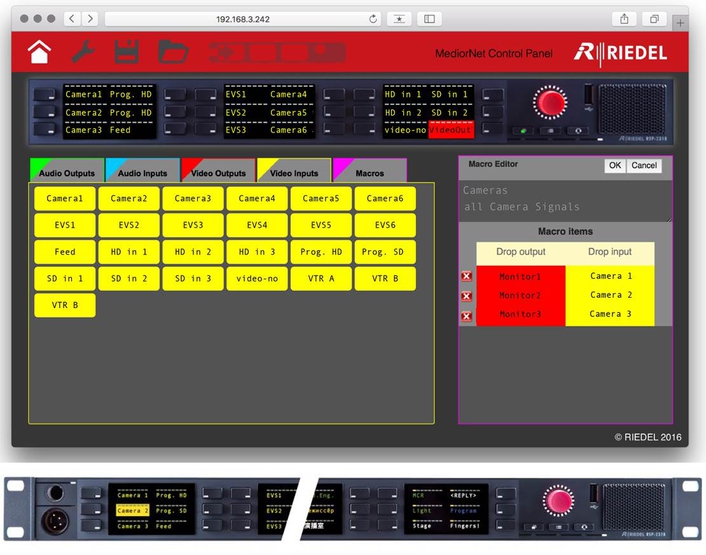 It was announced that Sky Deutschland AG (Sky Germany) has already outfitted a new fleet of seven satellite newsgathering (SNG) units and two OB tender vehicles with Riedel Communications’ MediorNet real-time media network and SmartPanels equipped with the new MediorNet Control App. The SmartPanel App enables Sky Germany to route and control signals across the MediorNet network according to the requirements of different live sports and news event. 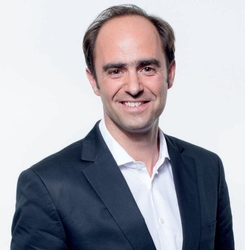 "Riedel's SmartPanel with the MediorNet Control App saves us a tremendous amount of time and effort in adapting equipment in our trucks to address varying production requirements," said Alessandro Reitano, Vice President, Sports Production at Sky Germany. "Facilitating fast, easy routing and control of all signals across our SNG and OB tender trucks, the SmartPanel gives us a new degree of flexibility that translates to greater efficiency in our overall operations. Simultaneous intercom functionality allows us to save space by using the same panel for both routing and communications. The future extensibility of SmartPanel functionality with further apps makes Riedel's MediorNet infrastructure an ever more compelling solution for our OB vehicles and production applications." 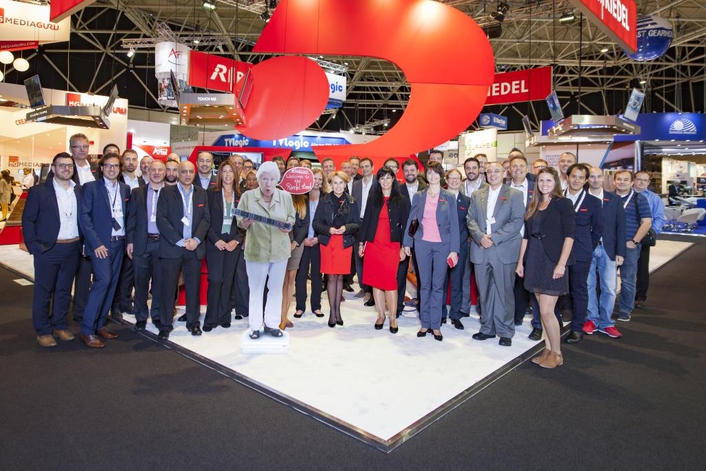