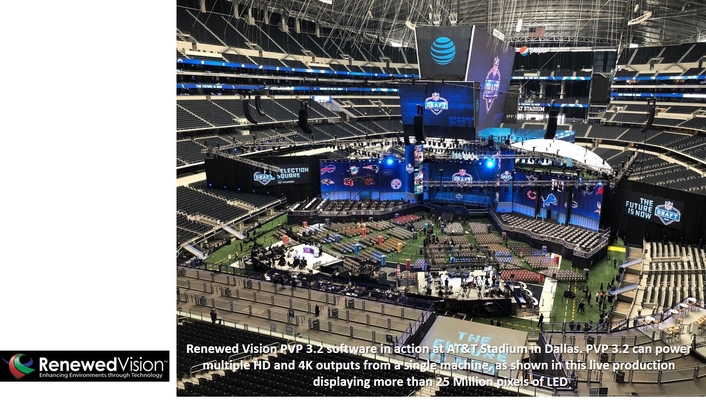 PVP 3.2 enhances I/O density, SDI synchronization and playout stability from a single workstation, while improving management of effects and transitions for dynamic productions

PVP 3.2 retains all enhancements introduced in the 3.1 release, including support for the industry-standard DMX512-A lighting control protocol and an integrated HTTP control server for improved data management and integration. PVP 3.2 amplifies the overall value proposition for customers with the ability to synchronize SDI feeds across multiple outputs, while simplifying how users manage effects and transitions in dynamic live productions.

“PVP 3.2 builds on the stable foundation of our best-in-class engine with substantial new playback features and benefits that add signal I/O density and centralize operations to a single workstation,” said Brad Weston, President, Renewed Vision. “It is now possible to play back and frame-synchronize multiple 1080p60 or 4K SDI outputs from one machine. We’ve already seen PVP 3.2 projects with 12 1080p60 outputs and a 4K output off of the same single machine.”

PVP 3.2 also strengthens its effectiveness for live productions by integrating network triggering for backup instances. This effectively adds a redundancy layer with seamless backup protection while in midst of a big event.

“Renewed Vision has consistently improved stability with each PVP release, and we have reached a new level in PVP 3.2,” said Weston. “That said, when the unforeseen should occur, our customers can retain the efficiency of single-machine operation while also achieving redundancy through network triggering that seamlessly triggers backup machines throughout the event.”

While centralizing operations to a single machine is the main value proposition of PVP 3.2, Renewed Vision has also responded to rental market requests to simplify license use across different workstations. The latest release allows users to transfer licenses between machines using a USB dongle without online activation and deactivation. This is especially useful for PVP3 customers working in rental and touring environments as it puts customers in control of their own license management.