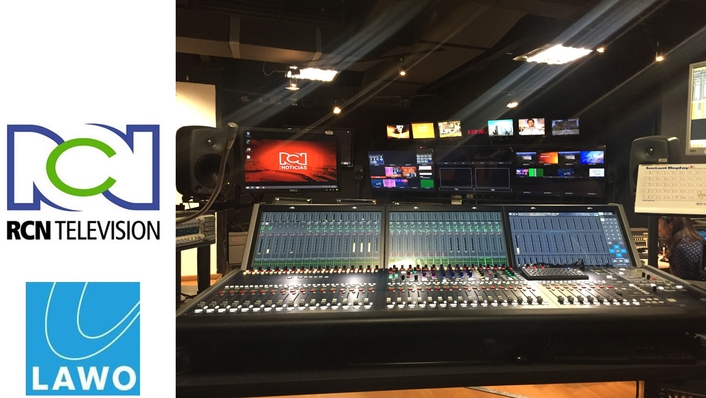 Now a private television network, RCN was founded as a production company in 1967, and has operated as a network since 1998. Today, it reaches 97% of the Colombian population of nearly 50 million through 13 stations.

The Lawo consoles are in use for RCN News (NTN24), the channel’s 24-hour news service in Colombia. The main console is a 40-fader mc²36, supported by a 24-fader mc²36 surface for redundancy. The full system includes a DALLIS interface with SDI I/O and GPIO boards to handle the AfV (Audio-follow-Video) necessary functions to automation some procedures.

RCN’s requirements for the equipment upgrade – and the audio mixing systems in particular – included gaining operating efficiency, establishing flexibility in workflows from remote control facilities, automation, and advanced AfV and Automix functionality. In their research, the RCN team responsible for specifying the refurbishment determined that Lawo best met their needs – in addition to the consoles’ feature set, Lawo’s audio quality, customization and flexibility proved essential in winning their endorsement.

“The two mc²36 consoles are the right solution for a 24/7 broadcast challenge – and beside the benefits of automation, AFV for multi-video sources, and the mxGUI control software, it was the remote diagnosis via web browser and the Lawo app that came as a nice surprise during the demo”, says Andres Galeano, Technical Head of RCN Colombia.