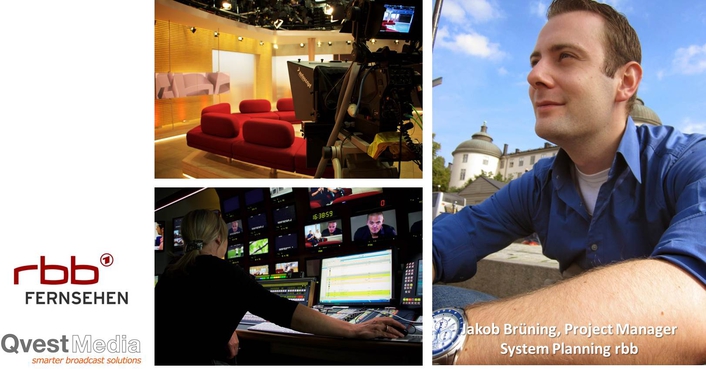 After an approximately 14-month project, German public broadcaster Rundfunk Berlin-Brandenburg (rbb) has now added additional broadcasting formats (zibb – zuhause in Berlin & Brandenburg und was! – Wirtschaft, Arbeit, Sparen) to its new file-based production platform at its Potsdam location. The systems architect and integrator of the new platform is Qvest Media. The company ensured that the new infrastructure was able to go into service without impacting existing broadcasting operations. Qvest Media’s professional approach has resulted in a six-year support and maintenance agreement following the completion of the project.

Monday 11 April 2016, at 6:30 pm precisely: zibb – zuhause in Berlin & Brandenburg, rbb’s regional magazine, goes live with current news, stories and regional contributions in HD quality. However, what the viewers do not realise is that this marks the beginning of a new era for the magazine’s behind-the-scenes staff. Since that Monday, zibb is now rbb Potsdam’s second broadcasting format to be produced with a completely file-based platform. The platform went live back in December last year. The first broadcasting format to be produced using the new technology is Brandenburg Aktuell, rbb Potsdam’s regional news programme. Further programmes and editorial features will be moved to the new production infrastructure successively in the course of the year. 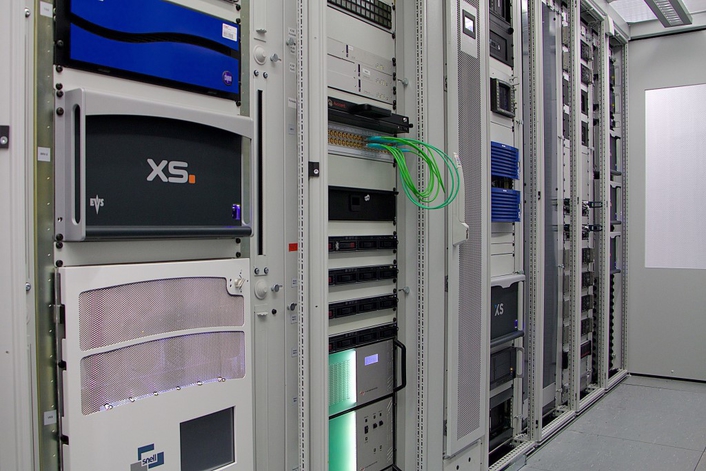 Equipment Racks in the central Equipment Room in Potsdam

Design, planning, integration and infrastructure commissioning were performed by rbb in collaboration with Qvest Media. The company acted as the general contractor and, in close cooperation with rbb, was responsible for all stages of the project. The new core of the file-based production platform is the “VMPS” media asset management system (MAM) from arvato Systems, which allows video and audio files as well as metadata to be easily viewed, edited and managed using a standard web browser connected from all editorial and processing stations.
The MAM system is currently also being rolled out by Qvest Media across locations, including rbb’s broadcasting centre in Berlin, where the company is also modernising the entire system infrastructure for file-based production processes in a later stage of the project. 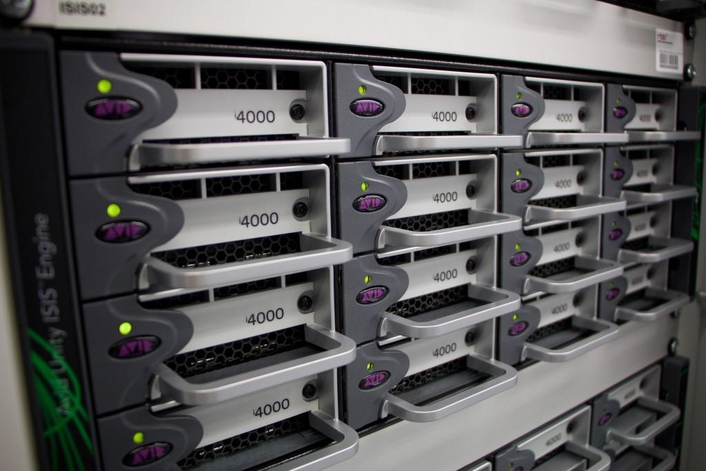 The broadcaster uses the MXF broadcast standard HDF02a with AVC-I 100 coding, which was developed by the Institut für Rundfunktechnik (IRT) research centre for ARD and ZDF, at all its broadcasting locations. It was therefore a particular challenge for Qvest Media to ensure the corresponding specification of the container format among the participating producers. The container format, which is based on server systems from EVS, determines the central file ingest and file upload systems. An Amberfin farm from the vendor Dalet spanning both locations provides the necessary transcoding. This converts the material at all the relevant interfaces like the remote VPMS ingest, during material upload from the VMPS MediaCenter and at a total of five central ingest stations – two in Potsdam and three in Berlin – to a standardised production format. 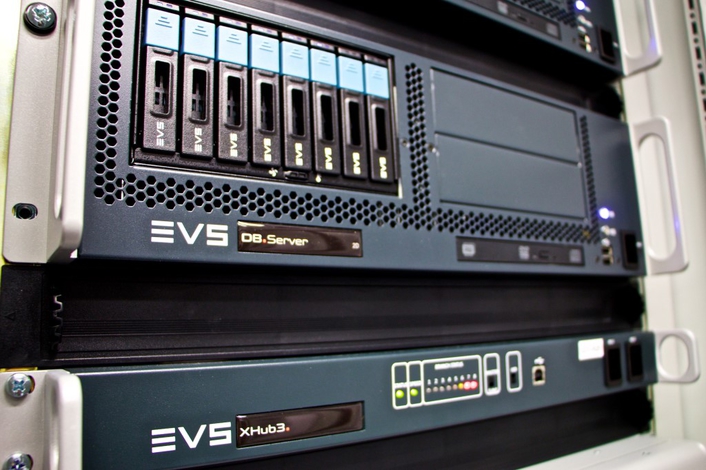 EVS Servers for the Central File Ingest and File Uploading

Another important part of system integration was the modernisation of the Avid-based post-production system. As a result, rbb now has two Avid production islands with 13 craft editing stations in Potsdam and 17 in Berlin, which are all connected to an Avid ISIS central storage system. Material can be ingested into the post-production system and transferred to the EVS playout system using Avid Interplay Transfer Engines and VPMS. Data can be stored on the EMC Isilon central storage system, which, with 167 terabytes in Potsdam and 307 terabytes in Berlin, has sufficient storage capacity for around 900 and 1,600 days of HD material in AVCHD 1080i/25 respectively. 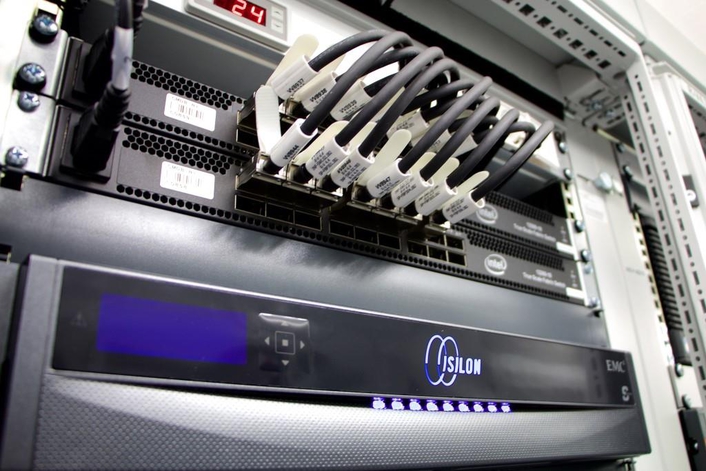 The Central Storage Platform is Based on EMC Isilon Systems

Qvest Media has also connected news editing stations equipped with Annova Open Media, together with the Adobe Experience Manager web content management system, to the end-to-end file-based production system. Material can be prepared as web-ready mp4 files direct from the arvato MAM system with a H.264 codec and published via XML import to rbb’s websites in order to ensure the fast and simple flow of material onto the web. 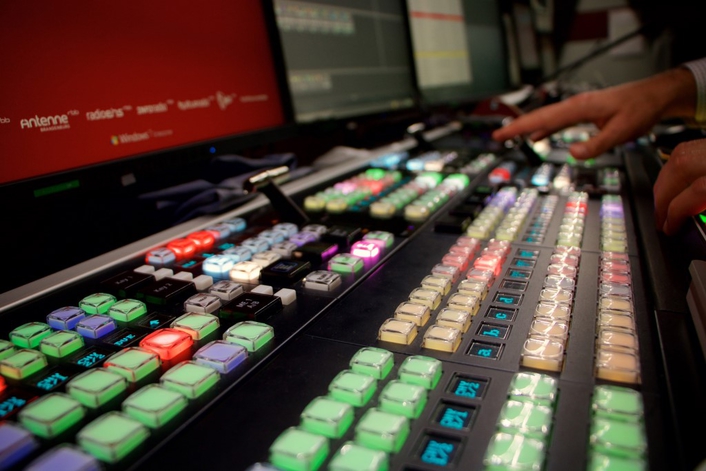 “We were able to complete the project in Potsdam as scheduled exactly to the day. Particularly given the parallel modernisation and the internetworking with the Berlin site that has now commenced, we look forward to seeing the project run virtually without a hitch despite major challenges,” says Jakob Brüning, rbb’s project coordinator. “The excellent communication and the high levels of technical expertise on both sides have played a significant role in this. We were especially impressed by the high level of commitment and motivation of all staff involved in the execution of the project. We are therefore delighted that the Qvest Media team has also been retained for day-to-day system support for the future.” 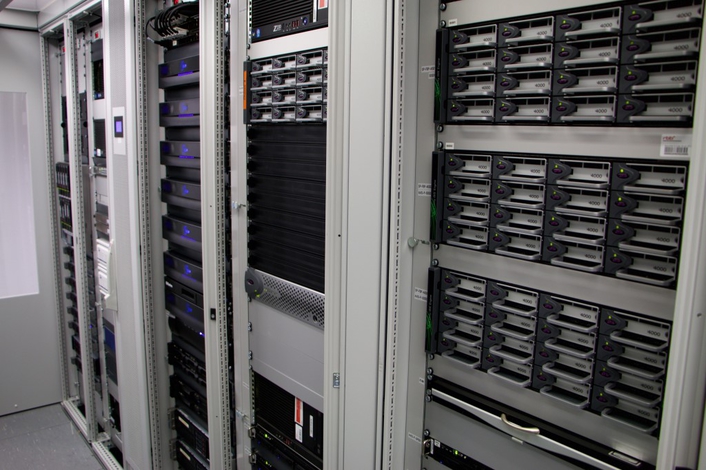 Equipment Racks in the central Equipment Room in Potsdam

Accordingly, the company will support rbb’s infrastructure for the next six years with a 24/7 service and support team. The service level agreement includes proactive system maintenance, support, planning and maintenance for installing vendor updates and upgrades in specific time frames, as well as day-to-day troubleshooting and bug fixing.