Lighting designer Francesco De Cave's enthusiasm was huge when he turned on the Mediaset TV studio lighting after equipping it with the Clay Paky Alpha Profile 800 STs he had requested. These small, powerful, high-performance beam shapers are ideal for the most demanding show lighting uses.

The studio set is very big. It is an open space for discussing everything that makes the news. The new transmission, actually called OpenSpace, was organized by the editorial staff of Le Iene with this in mind. It is a 360° set surrounded by a 30 foot high (9 m) cyclorama which covers all four sides, along which the cameras are positioned. A structure is found in the middle of the set, like a sort of skateboard ramp, which curves up vertically. It is mid-grey coloured (Kodak colour card), neither pale nor dark, "somewhere in between, chosen to optimize the projected images required." 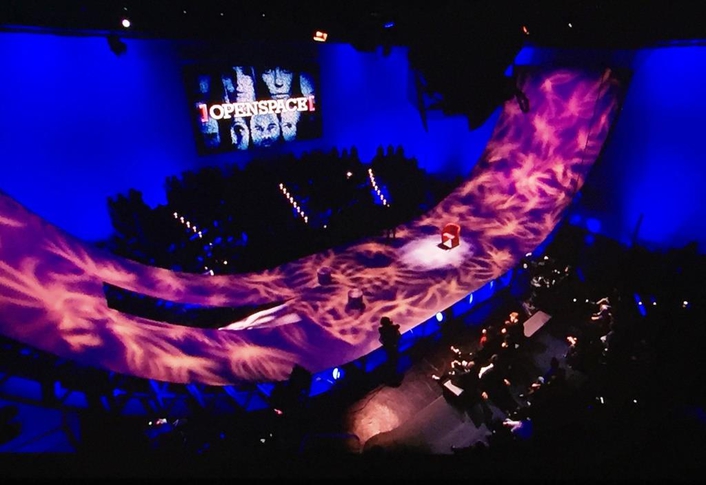 The Alpha Profile 800 STs turned out to be ideal for beam-shaping with the required precision and widening the beam with the zoom in order to ensure perfectly uniform illumination over the entire surface of the structure despite its considerable dimensions (16 feet [5 m] by 98 feet [30 m] long).  The lighting designer brought the whole surface of the structure to life with only eight lights located 23 feet (7 m) from the ground with custom gobos and other scenographic projections.

The audience, who sat on only two sides of the set along the edges of the middle structure, was backlit by fitting 24 Alpha Spot HPE 700s on the hanging battens. This was not a secondary aspect of the programme's design: "I try to mark out the space for the audience by enclosing it in a limited area, and this time I did this with the gobos of the lightweight, compact Alpha Spot HPE 700s."

Sixteen Mythos units, arranged on the ground in the four inside corners of the space at the corners of the structure, projected sharp, perfectly defined beams of light. They mainly illuminated the cyclorama thanks to their amazing zoom, which is made so the fixed and rotating gobos may be focused independently: its movements are smooth, fast and quiet. 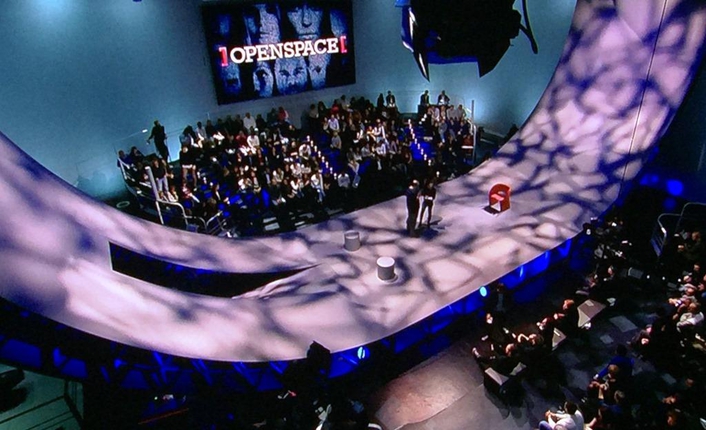 Francesco De Cave interfaced with set designer Marco Calzavara's graphic designs using display software, and the lighting design did not need any tuning when the set was installed and prepared.

Everything worked perfectly on the set, including the projection of texts and titles with very small fonts onto the structure.

The TV production team's proposal of projecting videos onto its curved surface or painting it proved unnecessary thanks to the lighting designer's idea of simply using the autofocus system of the Alpha Profile 800 STs. "Basically, I suggested splitting up the large complex graphics and printing them on different gobos: tiny 10 cm high writing, printed microscopically and projected with great clarity onto the structure, which then morphed back to the initial astounding picture of faces."

The Alpha Profile ST 800 turned out to be ideal for this task.

The equipment was provided by Roberto Dusi's company Energy Rental.