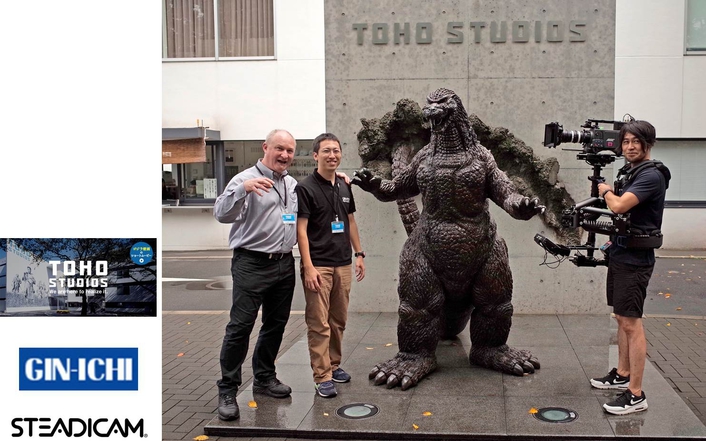 TOHO Studios, the legendary Tokyo production house responsible for the original Godzilla and its current remake, as well as Seven Samurai, directed by Akira Kurosawa, has purchased the new Tiffen Steadicam M-1 camera stabiliser for all its current and future feature projects.

Senior Cameraman Kosuke Yamada has been looking at the M-1 since its launch, and was further excited about bringing a rig to Japan after he completed the 6 Day SOA (Steadicam Operators Association) Classic workshop in the US with Jerry Holway and Steadicam’s inventor Garrett Brown. Assisting him on the language front during the workshop was Tiffen / Steadicam's US sales manager Dan Ikeda, one of Tiffen's senior workshop instructors.

Yamada-san's experience as a cinematographer was gained well before the SOA workshop, with a 13 year camera assistant’s path at TOHO Studios leading four years ago to the top job as TOHO's Cinematographer.

We asked why he had chosen the M-1:
“The first reason was its stability. When I used the M-1 for the first time at the SOA workshop, I felt a firm sense of stability that I had never felt before. No matter how much lighter cameras become, the quality of the image largely depends on its stability in use.” 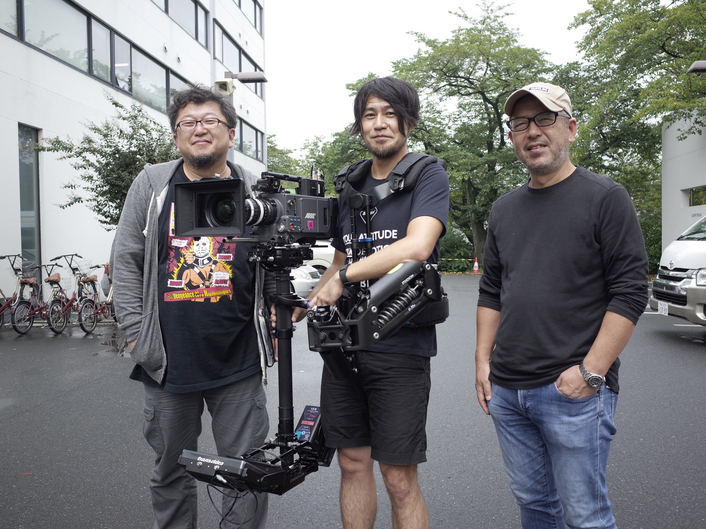 Kosuke Tamada (centre) proudly showing off TOHO’s latest production tool, the new Steadicam M1 with the G70X arm and Exovest. On the left is Godzilla Director Shinji Higuchi and on the right Katsuro Onoue, B Unit Director

"The M-1 can accommodate various shooting styles and equipment, and I think this is perhaps the biggest strength of it, but also very important is the ease with which you can achieve dynamic balance and smoothness of the gimbal.”

“A further reason was the modular design.  Unlike the USA, it is difficult for us to customize our rigs here in Japan as we often do not have enough information or equipment,  but with the M-1, we can upgrade it later if it is necessary. We are really impressed and happy with it.”

TOHO's M-1 stabiliser is the first to be delivered to an Asia-based customer, beating Taiwan by a day. A recent showing of the M1 at Beijing BIRTV broadcast exhibition has already resulted in more systems going to Chinese broadcasters and film-makers.

All Tiffen M-1 systems in Asia have been ordered with the Fawcett Exovest. The supportive exoskeleton design of Exovest frees the chest from constraint by providing support on the hip and shoulder. The industry’s benchmark ISO-Elastic G70X arm completes the package, making M-1 the most advanced stabiliser in feature production.

The M-1 Steadicam is the result of seven generations of experience, innovation, engineering skills, technological advances and invaluable feedback from the users. It’s the strongest and most robust Steadicam of all. The ‘M’ stands for modular, and this is the most modular Steadicam ever. You can start with the simplest post and upgrade later to the full rig.
The new M-1 camera stage is built around strength and high load precision with centre drives for superior rigidity with an optional vernier fingertip tilt adjustment – no tools needed.
The G-70x Elastic Arm is highly durable, performance adjustable, and offers smooth operation with a huge 70lb. lifting capacity and a 29″ boom range. You can move it from lowest to highest position with very little effort.