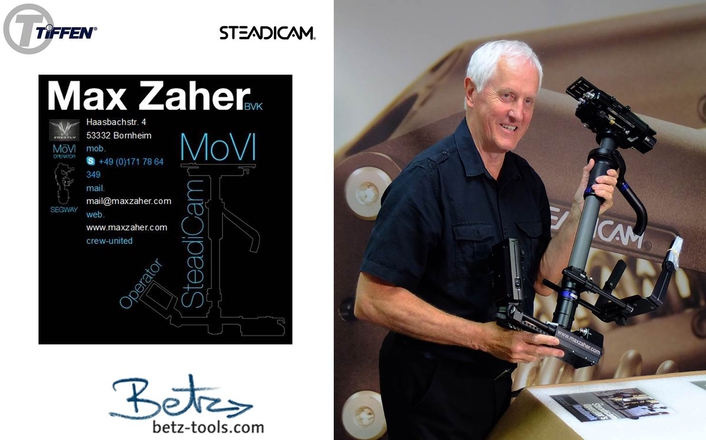 Steadicam inventor Garrett Brown in the UK preparing the new 7th generation M-1 Steadicam for delivery to Max Zaher in Germany
Tiffen International in the UK is celebrating the delivery of the first Steadicam® M-1 rig which has been ordered by German Steadicam operator Max Zaher.

Steadicam inventor and Academy Award recipient Garrett Brown, ASC, is in the UK to celebrate the 35th anniversary of ‘The Shining’ and took the opportunity to inspect the first  M-1 prior to delivery.  Garrett is in the UK after teaching in a week long Steadicam training course on board the iconic ‘Queen Mary’ in Long Beach, California.

Max Zaher is currently shooting a film on location and unfortunately won’t be able to get to the UK to receive the rig personally.  Max is a rising figure in the German film and television industries as a Steadicam operator/cameraman. “I’ve worked for two years with the Steadicam rig of my mentor, Klemens Becker, and also rental rigs, but I’ve now decided to buy my own rig. Having worked with many different sleds, arms and vests, I knew what I was looking for. Light, easy to build and quick to configure or change mode. It should be modular so I could exchange parts myself on the road if it became necessary. I wanted it to be tool free and have many types of connectors for add-ons. At CINEC I had a good opportunity to compare many different rigs. The M-1 felt very good right away and was by far the best combination of the things I needed."

"The M-1 does have everything you look for in a modern Steadicam rig. It is well balanced and very quick to configure. It is well thought through in every detail which helps a lot in today’s film making. It is fun to work with and I love it already!” 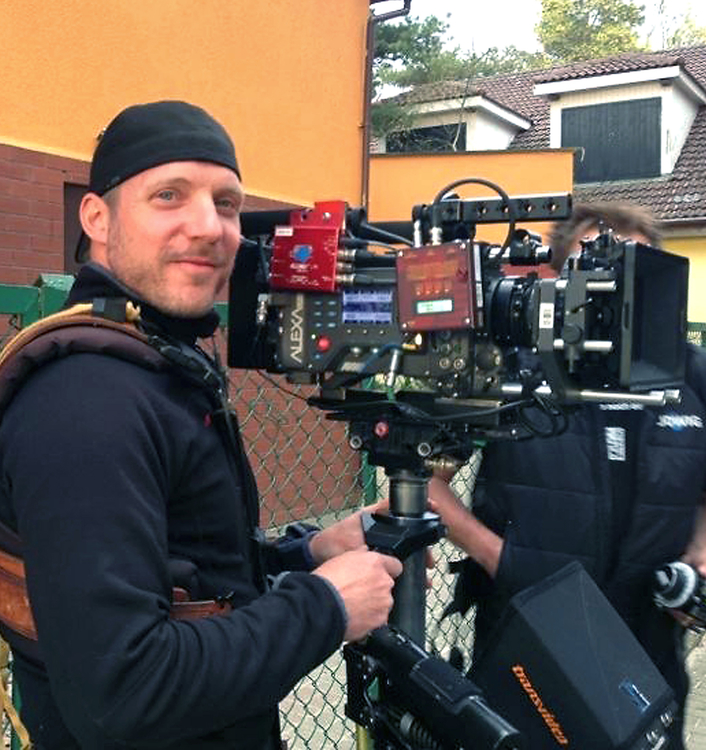 Garrett Brown commented:“I’m intensely proud of the M-1 and all our people who have contributed to it. I have to say, having operated Steadicam myself for thirty something years - I stopped in 2004 - I look a little wistfully at this new rig and wish I could be out there using it.”

The M-1 is the result of seven generations of experience, innovation, engineering skills, technological advances and invaluable feedback and input from the users who have made Steadicam the valued production tool it is.

It’s the strongest and most robust Steadicam of all. The ‘M’ stands for modular, and this is the most modular Steadicam ever. You can start with the simplest post and upgrade later to the full rig.

The new M-1 camera stage is built around strength and high load precision with centre drives for superior rigidity with an optional vernier fingertip tilt adjustment – no tools needed.

The G-70x Elastic Arm is highly durable, performance adjustable, and offers smooth operation with a huge 70lb. lifting capacity and a 29″ boom range. You can move it from lowest to highest position with very little effort.

The vest of choice now for many is the Fawcett Exovest™, designed by Steadicam operator Chris Fawcett. With a pivoting exoskeletal structure the Exovest offers a huge leap forward for operators with unrestricted movement, on-the-fly adjustability, with a user-friendly design which is also female friendly. Now the Steadicam operator can walk and move more naturally while shooting.The M-1’s low vertical profile maximizes each post length for the greatest extension of sled length, giving the operator the maximum flexibility to position the monitor and gimbal where needed, and in long modes, enables extra high or low lens height. Tiffen provides a wide choice of monitor types, manufacturers, sizes and styles for extreme mounting possibilities, complete with custom monitor brackets and cables.

The Steadicam distributor for Germany is Betz-Tools in Munich, who introduced it to Germany back in 1977 and sold the first Steadicam I in Europe.

About Steadicam:
In the early 1970s, American cinematographer Garrett Brown had a simple, but revolutionary idea: to make a device that could smooth out handheld action shots. The result is the Academy Award-winning Steadicam®, which made its feature film debut on the movie “Bound for Glory,” and rose to prominence in the films “Rocky” and “The Shining.”

Since then, Steadicam has been an invaluable, dynamic production tool in the industry.  New generations of Steadicam Camera Stabilizing Systems have been comprehensively redesigned to unleash endless creative possibilities. Tiffen offers a complete line of leading edge models to meet your film and video needs.  Tiffen is committed to support the needs of the motion picture, broadcast and professional imaging industries with the latest state-of-the-art steadicam technology to meet your film and video needs.