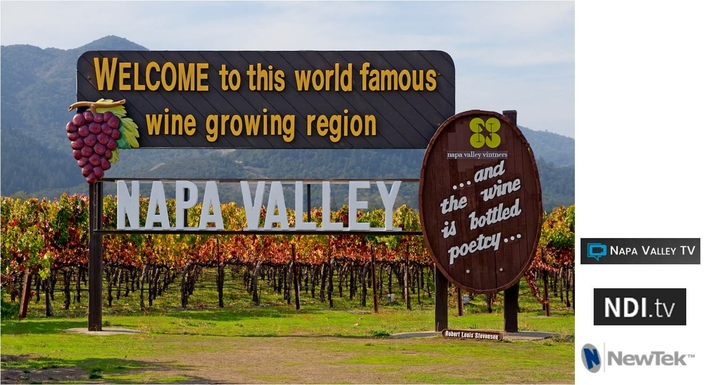 What Raymond is passionate about is empowering Napa Valley citizens to exercise their First Amendment Rights. “If you’re in public access, you’re not in it for the money. You’re in it for the love of free speech and giving people a media platform that they can use to communicate and express themselves,” he said. “Despite our nation’s media overload, there are many under-served communities, non-profits, and special interests that just want a chance to be heard.”

While many public access and community media stations struggle to survive financially and stay relevant, Napa Valley TV has found that the social media craze is actually good for business because it brings in people that want to use their TV studio facility to produce polished video shows that will make a bigger splash when uploaded to their favorite social platforms.

Symbiotic Relationship
The deal is that anyone living or working in Napa County can use Napa Valley TV’s 4K studio and HD field equipment to produce TV shows on any topic they’re passionate about—all for an annual fee of just $20. This includes full access to a NewTek TriCaster® TC1 production switcher, 4K TV studio with virtual set and graphics keying capability, and a full Adobe Creative Cloud editing workstation.

In return, Napa Valley TV gets to run that member-produced show on all of its cable channels, which include: Comcast 27 (Educational) and Comcast 28 (Public Access), and UVERSE Channel 99. This same programming also streams both live and on-demand through their website —and soon in high-definition. 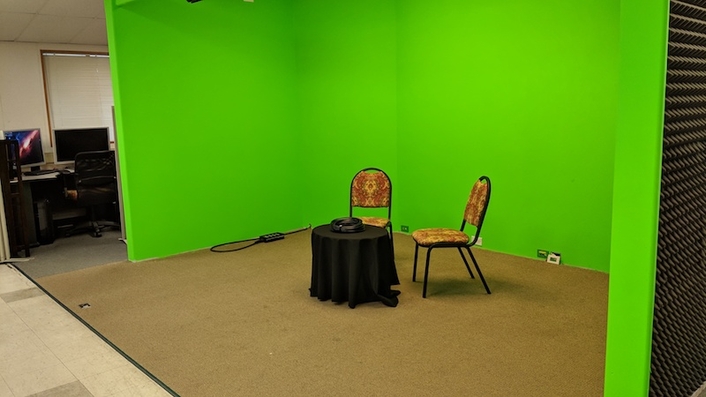 Napa Valley TV HQ is small, spartan, yet powerful in its capabilities and reach. “Here at the station, almost all of our members—including show producers, directors and camera operators—are non-professional, non-tech-savvy people, so the overall productio

Napa Valley TV HQ is small, spartan, yet powerful in its capabilities and reach. “Here at the station, almost all of our members—including show producers, directors and camera operators—are non-professional, non-tech-savvy people, so the overall production process needs to be as simple and efficient as possible for them to bring their vision to life,” Raymond said.

Building Value
The key to Napa Valley TV’s success has hinged on strategic management of the organization’s limited budget, space, and personnel, including three full-time staff, five part-timers, and a team of volunteers. Since James Raymond came aboard as Executive Director, he’s worked with local government officials to ensure a strong partnership between the Community Access Station and Government. Napa Valley TV provides video production services for a nominal fee, which until then, some meetings had received at no-cost.

“One thing I would recommend to all public access centers out there would be to get involved with your community and, more importantly, to meet your city officials. Let them know you are a public access station with a strong technical aptitude that can be there for them in times of need,” Raymond said. 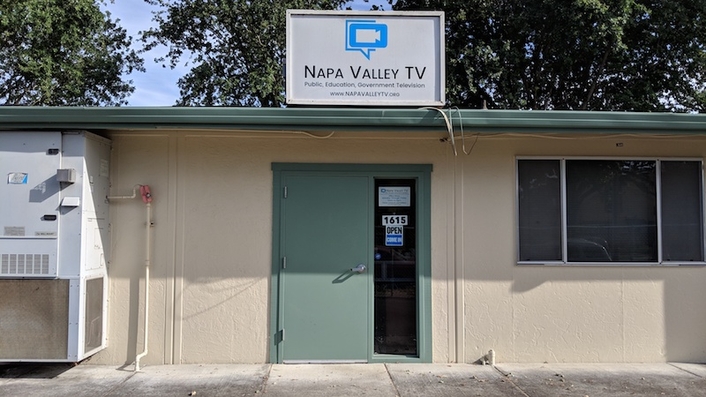 Napa Valley TV HQ is small, spartan, yet powerful in its capabilities and reach. “Here at the station, almost all of our members—including show producers, directors and camera operators—are non-professional, non-tech-savvy people, so the overall productio

“Whenever [our local city officials] encounter a technical issue while they’re recording video of their government meetings,” Raymond said, “We serve as a technical liaison that they can call on for prompt, knowledgeable, expert help. This is invaluable for government officials, while reinforcing a mutually beneficial relationship.”

A greenscreen and a TriCaster TC1 with virtual set capabilities turns Napa Valley TV's small office space into a professional looking TV production. "We quickly teach our novices a few key button-pushes with which they can accomplish most of what they want to do during their productions.”

Smart Technology Moves
Even with its mix of cable TV PEG dollars, membership fees, and production service revenues, Napa Valley TV has a very tight operating budget where every dollar counts. Given that managing a broadcast TV studio—especially one that’s 4K capable—takes a lot of capital investment in ever-changing equipment, Raymond and his Programming Manager Justin Bernard, think long and hard before plunking down hard-earned money on equipment.

For their most recent upgrade, from SD to HD/4K, Raymond and Bernard boast that they made a quantum leap in capabilities. The lion’s share of this expenditure went to acquiring a NewTek TriCaster TC1 production switcher. The system won their business by offering the features they needed in a single integrated package, while remaining budget-friendly.

They also considered the TriCaster 8000, but decided to pass on it because it was, at that time, a mature product, and they saw that NewTek had something better right around the corner—the TC1. “It took us seven years to save up for this upgrade,” Raymond said. “We had to get it right and select a system that would serve us for many years to come.”

They never lost sight of the most important goal: choosing a system that their members would find easy to learn and operate.

“Here at the station, almost all of our members—including show producers, directors and camera operators—are non-professional, non-tech-savvy people, so the overall production process needs to be as simple and efficient as possible for them to bring their vision to life,” Bernard said. “Because it’s an integrated system rather than a long chain of devices, the TC1 completely simplifies the workflow, the signal path, and the potential troubleshooting as nearly everything feeds directly into it.”

A secondary, but equally pressing, buying criteria was the need to have powerful virtual set capabilities readily available and easy to employ. Since the studio itself is a mere 192 square feet with a greenscreen wall, incorporating a virtual set system is the most-effective way to give their members creative versatility during production.

With the TriCaster TC1’s built-in virtual set system, set assortment, and LiveMatte keying functions, members can change-up the looks of their sets easily, including keying graphics onto virtual on-set monitors within the electronic set.

The control room at Napa Valley TV where the TriCaster TC1 operators make TV magic. “We had to get it right and select a system that would serve us for many years to come.” 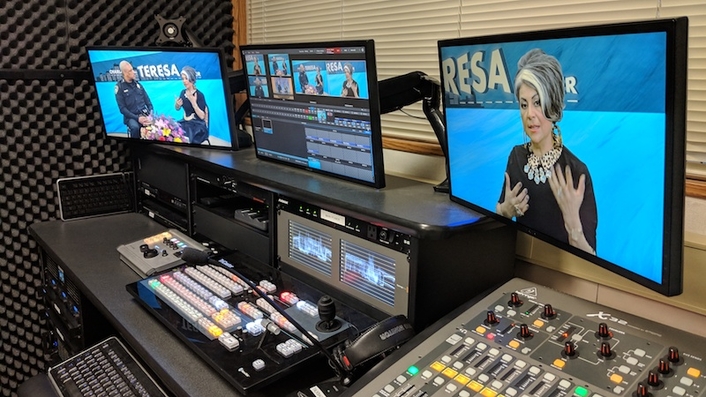 The control room at Napa Valley TV where the TriCaster TC1 operators make TV magic. “We had to get it right and select a system that would serve us for many years to come.”

Getting Everything for Next to Nothing
After paying their $20 annual fee, members get full access to Napa Valley TV’s powerful broadcast production infrastructure. But before they get free run of the place, they must attend three classes, two of which are conducted by Justin Bernard, who teaches the basics – proper use of the equipment, camera terminology and framing, micing, lighting, and other production techniques, including editing, graphics, and field production. The third class, although technically first in the process, is the Policies and Procedures course, taught by James Raymond, which teaches ethical public access guidelines.

“With its rows of lighted buttons and multiple images on its multiviewer, the TC1 can be intimidating at first. But we quickly teach our novices a few key button-pushes with which they can accomplish most of what they want to do during their productions,” Bernard said. “After the orientation and some hands-on experience, they quickly become confident and self-sufficient, although technical assistance is available should they need it.”

Since the station has also come up with easily modifiable templates for graphics, intros and outro credit rolls, there’s no need for members to learn multiple programs, such as Photoshop and/or Premiere, to create their graphics because the templates make it possible to do everything they need right from within the TC1.

With these graphics templates, which Napa Valley TV created using a combination of the TC1’s Live Text program and Adobe Photoshop, members can easily modify and import graphics, such as lower third supers, into the switcher. Users that would prefer to create their own graphics from scratch can import those just as easily. 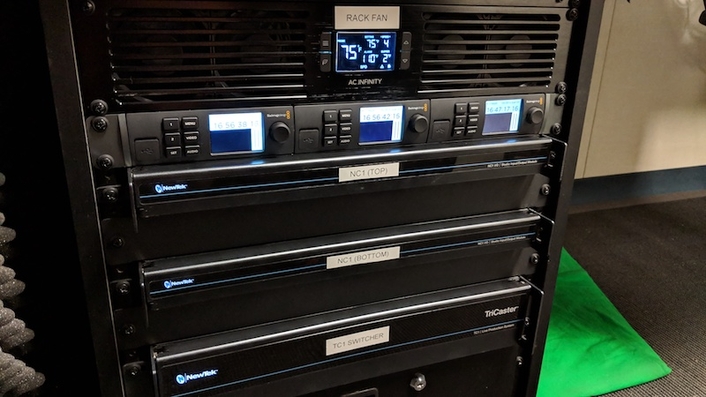 “The TC1 is immensely important to the success and viability of our station as it’s really the ONLY switcher option that checked off all of the boxes when we were looking to upgrade to HD/4K,” Bernard said. “I seriously doubt that we’d be able to perform as well without it, as other systems we were considering at the time wouldn’t have allowed for the simplistic workflow we needed for our members.”

Members can shoot in 4K-quality in the studio, which is equipped with NDI®, (NewTek’s Network Device Interface), which is used to bring the 4K camera sources into the TC1 via two NewTek NC1 Input/Output (I/O) units. The 4K signals then go into any of three Black Magic Teranex Mini 12G-to-Quad-3G converters that convert them to the quad-split 3G SDI format.

From there, the quad-split feeds go into either of two NC1 I/O units where each quadrant of each camera signal is pieced back together into a single image. These NDI camera signals are then available as sources that the members can switch between within the TC1. “Being able to bring those 4K signals into the TC1 over NDI made that high-end capability possible, while still being cost-effective,” Bernard said.

Along with the NewTek TriCaster TC1 switcher, the adjacent production control room consists of a Behringer X32 digital audio mixer, DVD recorders, and an Eartec UltraLITE wireless headset system for the crew. A Tascam DVD player and CD/iPod player are available as input sources to the TC1, while a Panasonic DVD recorder is a TC1 output device. To handle phone lines during live call-ins, Napa Valley TV’s control room also has a JK Audio Innkeeper PBX system, and the TC1 inherently handles calls via Skype for live, remote interviews.

The editing cubicle is based upon the Adobe Creative Cloud, including Adobe Premiere Pro for 4K editing and After Effects for motion graphics creation. This space can also be used to record voice-overs. The workstation is a dedicated editing computer with one of the latest 6-core Intel i7 CPUs, 32 Gigs of RAM, a GTX 1660 with 1500 CUDA cores, and NVMe storage. 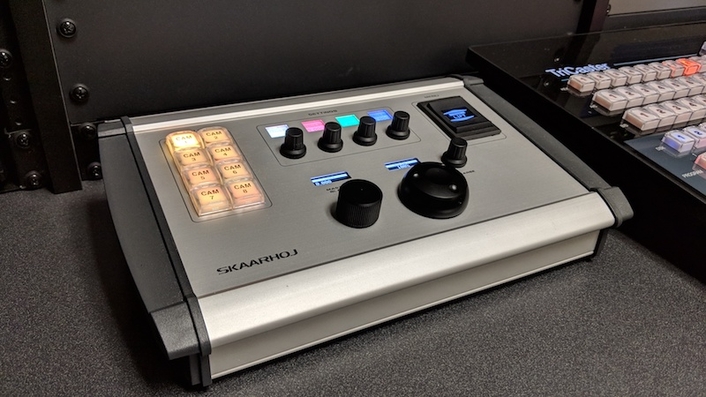 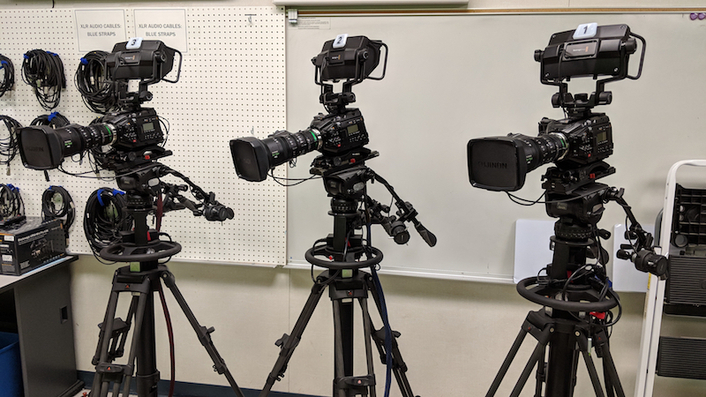 Napa Valley TV also produces important public access programming and provides trained staff for their government functions, such as local city council, planning commission, and other committee meetings.  At election time, they produce “Meet the Candidates” to help introduce candidates running for local office, and on Election Day, they cover the results.

Napa Valley TV is also seen as a resource of information when disaster strikes. They have provided coverage of recent Napa County wild fires along with other public emergencies, as well as special community events. And, for local non-profit organizations, they use their studio facilities to produce and broadcast public service announcements (PSAs) for free. Community members and non-profit organizations may freely use their finished shows and PSAs on their own websites and social media platforms. 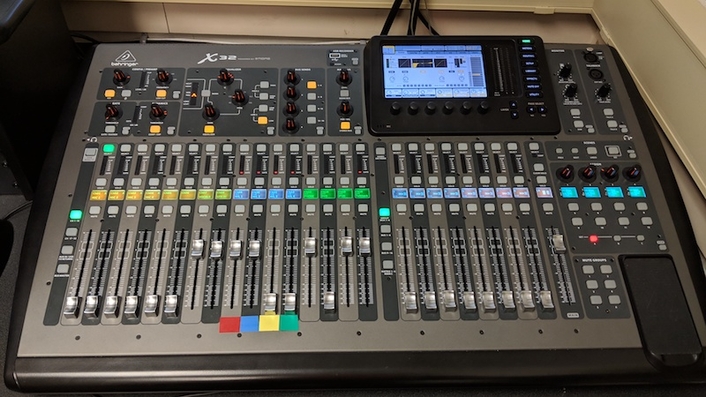 Raymond concludes, “I attribute our success at Napa Valley TV to our members. At the end of the day, they’re the ones coming in here, utilizing our studio, hosting shows, and bringing in guests to create the content that we broadcast and stream. We would not be as successful were it not for all our members and the great shows they produce.”