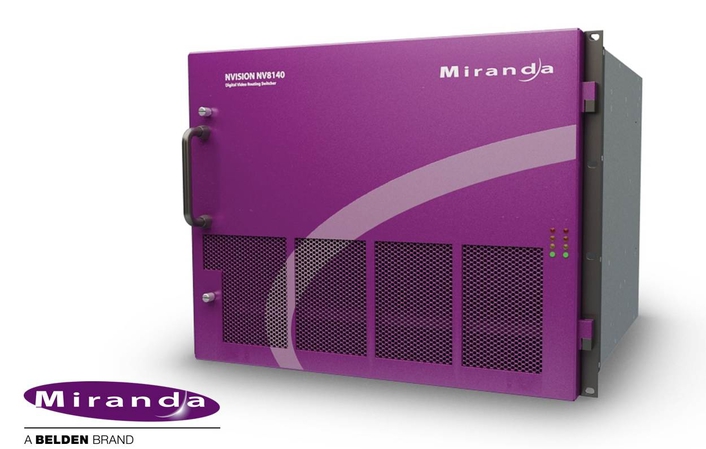 .
Miranda Technologies, a brand of Belden, Inc., a global provider of integrated solutions for production, playout and delivery systems for television broadcasters and multi-system operators, announced the launch of its new NVISION 920 purpose-built, enterprise class router controller, and an upgraded NVISION 8140 router at IBC 2012. Both are designed with no-compromise functionality at the heart of their compact cores.

“The compact size of this highly configurable controller is very important for both fixed and mobile broadcast applications,” said Marco Lopez, senior vice president, Infrastructure, Routers and Monitoring for Miranda. “This single unit provides comprehensive control and functionality while conserving precious rack space, reducing heat output and lowering power consumption. No other manufacturer can offer such complete control in such a small, power-efficient package.”

The NV920 is available as a single controller that can be easily upgraded in the field to redundant control with the effortless addition of a second control module. Because NV920 modules are user-replaceable from the front there is no need to access the rear of the unit to remove cables, wires or screws. This enables quick changes to additional or spare modules on the fly with no interruption to service. The unit’s redundant power supplies are also hot-swappable, a mission-critical element for most broadcast operations.

Lopez adds, “Many broadcast installations have space and power limitations and we have worked diligently to take those considerations into account when bringing new and upgraded technologies to market. For example, in addition to the new NV920 controller, we have upgraded our new NV8140 router with similar space and power saving advantages in mind.”

Miranda’s NV8140 is the latest addition to the NV8500 series of Enterprise Class routers and takes advantage of proven technologies that already exist in that series.

What makes the NV8140 a standout addition to the popular NV8500 series is its support for hybrid audio/video routing with standard coax or fiber connectivity via a rectangular 144x288 matrix, all housed in just 8RU. Like the new controller, this router is an ideal option for mobile production vehicles and smaller studios.

It includes crosspoint redundancy that protects all signal paths, including multiviewer outputs. The device supports 3Gbps, HD, SD, DVB-ASI and integrated audio processing, and with its fiber connectivity, it also supports CWDM. Third-party control protocols are also available for easy integration into existing infrastructures if desired.

Highly efficient cooling and effortless, front-loading serviceability complete a package that for the first time offers crowded broadcast operations with powerful functionality and easy maintenance that would have previously been ruled out due to severe space constraints and unacceptable service access requirements.

About Miranda Technologies
For over 22 years, Miranda Technologies has been a leading worldwide provider of hardware and software solutions for the television broadcast, cable, satellite and IPTV industry. Its solutions span the full breadth of television operations, including production, playout and delivery. With a wealth of experience in delivering IT-based and traditional television systems, Miranda is uniquely positioned to help customers enhance their facilities, while generating additional revenue, reducing costs and streamlining operations. Miranda was acquired in July 2012 by St. Louis-based Belden Inc. and is the cornerstone of its broadcast division.  Belden is a worldwide leader in the design, manufacture and marketing of cables, connectivity and networking products for many industries including broadcast, entertainment, consumer electronics, education, transportation and industrial automation.