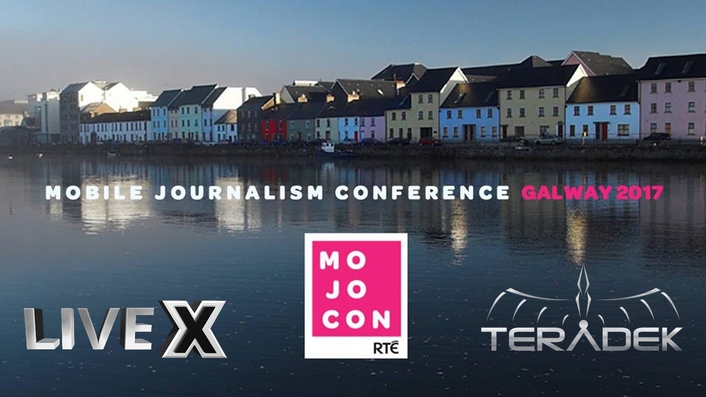 Live X produced all twenty streams for the Teradek Studio at #Mojocon 2017 in Galway, Ireland, with only an iPad Pro and four iPhones

At the Teradek Studio in the Mobile Journalism Conference, hosts David McClelland and Róisín Ní Thomáin interviewed guests in a more talk-show, rather than conference panel, format, allowing them to get into more detail with keynote speakers, and feature additional guests beyond the mainstage lineup.

Our focus on the production side was creating great quality webcasts using truly mobile-ready gear.  You can’t get more multicam-and-mobile than Teradek’s Live:Air workflow. Live:Air software on an iPad makes source inputs simple, finding and streaming any devices running Live:Air Remote software on the same network. With Live:Air, we could then switch between four iPhone 6sPlus cameras, while also adding lower thirds, bugs, slates, and roll-ins, and mixing audio sources. 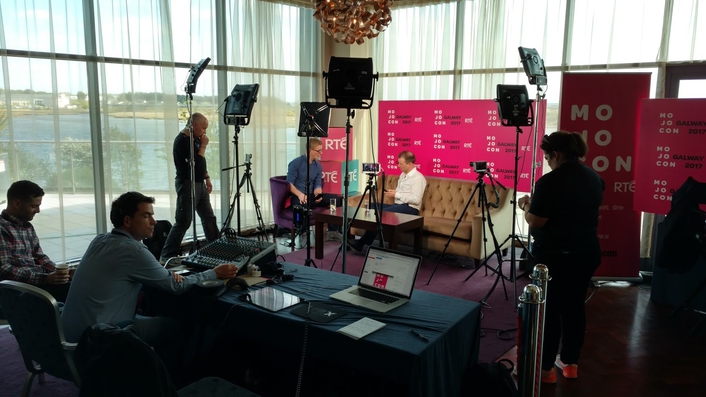 We took it several steps further, however.  We reveal our “secrets” below, but you can see a brief explanation in a (very meta) segment we ran live, in which Live X producer, Nick Micozzi, discusses the Live:Air workflow while switching the actual show: First we addressed lensing.  We used a Exolens Zeiss 0.6 wide angle for our wide shot, along with the 2x zoom for singles on our flanking cams to add variety and better picture quality.  For our main wide shot, we went without any lens and just used the stock iphone which gave us a nice medium wide, and we used that same setup for our handheld feature cam. 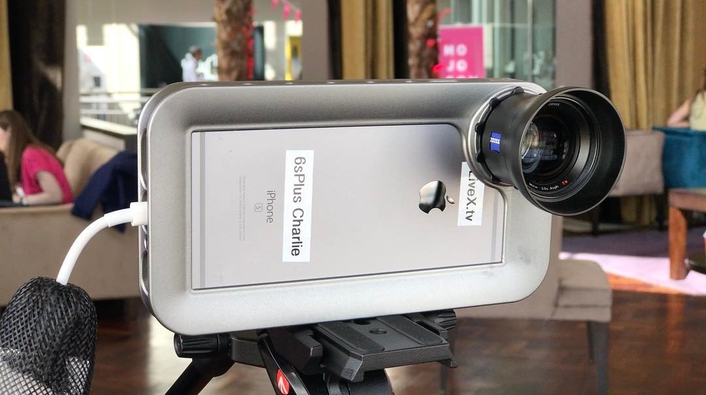 In order to mount both the lens to the iphones and the iPhones on Manfrotto tripods, we used Helium Core iPhone Rigs. They fit the lenses perfectly, and have all the ¼”-20 mounting points you should ever need. They also keep the iPhone protected and secure with its strong aluminum body and robust thumbscrews.

As with any conference like MoJoCon, competing for wifi is a big challenge, and we didn’t want that to impact our stream.  In a pure wifi workflow, you need only connect all your devices on the same wifi network, and you’re whole production can be 100% untethered. But in this case we needed the reliability of wired ethernet, which meant a lot more cable. 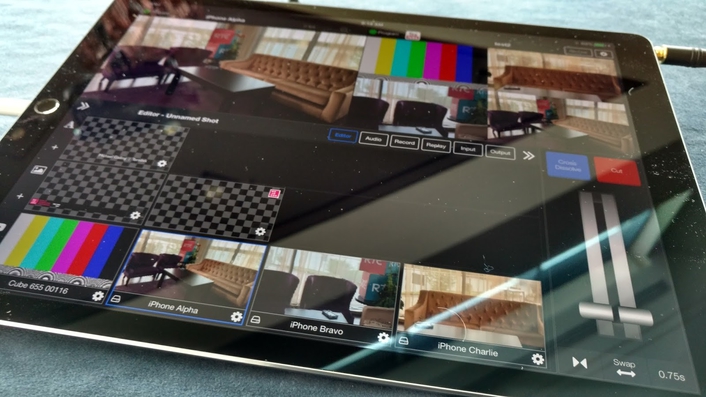 How to wire iOS devices with ethernet

This was one of the questions we got most at MoJoCon.  “What are those cables under the sheaths?”

For each device, we started with a Lightning to USB 3 Camera Adapter. This allowed us to connect the iPhone to other adapters and devices via USB.  However, in order to use that, you also have to use tether power through the adapter, so we used 2m lightning cables to do that.  Note, the stock 5W charging adapter for iPhones does not work in any part of this workflow, so we use 12W charging adapters throughout. To the powered Camera adapter, in most cases, we ran the USB to Ethernet adapter, and then connected that with CAT6 to our network switch.  Three of our four iPhone cameras were wired this way. 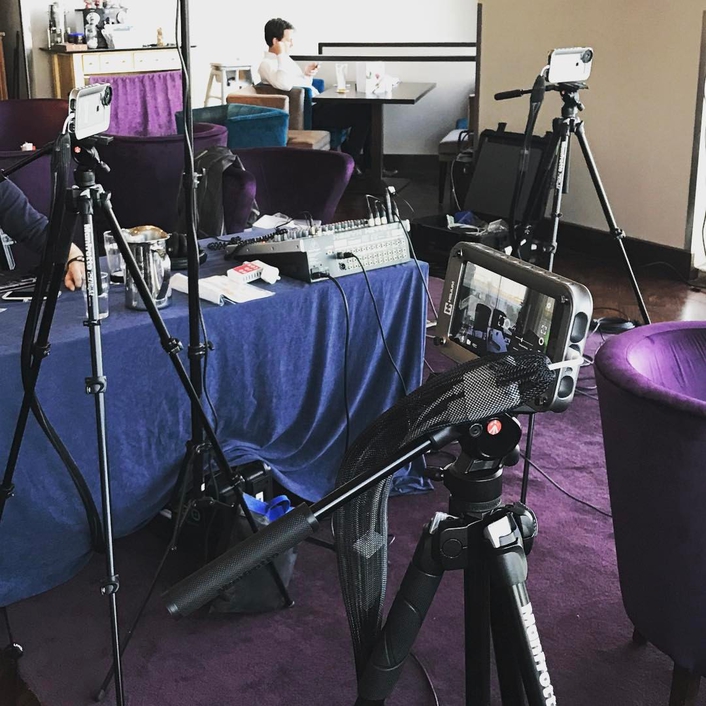 However, we also wanted good, clean audio, and with up to six guests per segment, we needed to be able to mix down the audio separately, and then embed that final audio mix into one of the cameras. For this setup on the wide camera, starting from the USB Camera adapter, we we connected a powered 5-port USB hub. Into that hub’s ports, we plugged in 1) the lightning cable for charging; 2) the Ethernet adapter connected via CAT6 to the switch for network, and 3) a USB-audio embedder taking XLR from the sound mixing console. 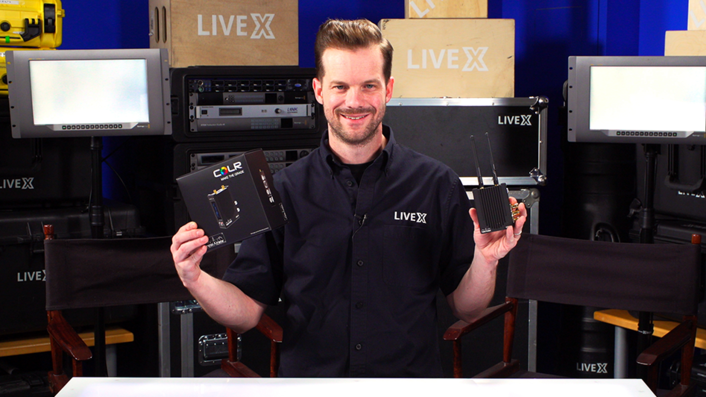 Finally, we knew some of our guests wanted to show off their Apps, or other on-screen visuals from their iPhones.  Since Live:Air Remote sends only the camera feed to Live:Air, we set up a fifth camera source, for getting the live screen feed from guest  iPhones via HDMI, through a Teradek Cube 655.

The Cube, when in Live:Air mode and on the same network, easily connects with Live:Air as another source.  This was the only input source where the cabling didn’t start with the Camera adapter.  Instead we used the Lightning to HDMI adapter, which also requires tethered power.  From there, we simply ran the HDMI to the Cube and connected the Cube to the network switch via CAT6.

So that’s all the cabling mystery behind our braided sleeves.  We weren’t trying to be secretive, just secure and tidy.

And since we went that far...and since we were shooting into an-all-window set...into sunrise, we thought we should add some lighting. We used Litepanel BiColors and Sola 4s and stands provided by CameraKit, and a new flexible ultraportable LED 1x1 from Ken Fogarty of Fogarty Fenwick Productions. 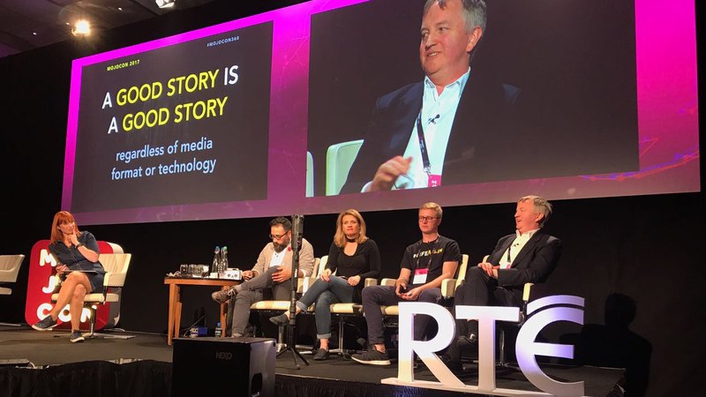