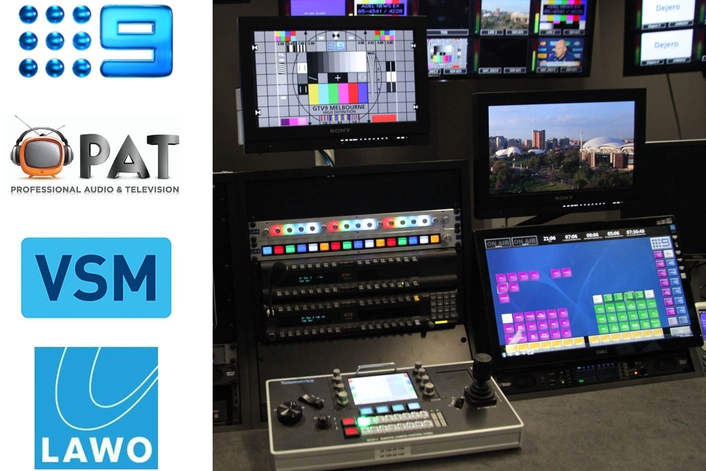 With a new purpose-built facility on the drawing board, Australian broadcaster NINE Network Australia aimed to speed up operational workflows while simultaneously creating more time for content production. The ambitious and demanding project was assigned to broadcast systems integration specialist Professional Audio & Television (PAT), with the brief to unite a diverse range of products under a centralized and manufacturer agnostic control plane. Key to PAT’s solution were Lawo digital audio and video processing tools, and the Virtual Studio Management (VSM) system.

Providing facility-wide control over the new Adelaide facility, PAT supplied, configured and commissioned a large VSM system that connects all of the site’s broadcast systems. These include six Lawo V_pro8 8-channel video processor “toolkits“ for audio embedding and de-embedding, and video processing in the facility-wide workflow.

V__pro8 offers high-quality format conversion and color correction. Its high-density MADI I/O provides efficient video-to-audio bridging within the NINE Networks studio infrastructure, with the interfaces operating as a flexible matrix – each V_pro8 offers an 8 x 8 video matrix and 384 x 384 audio matrix enabling switching of any signal to any other. A modern GUI based on HTML5 provides an ideal operating interface.

“Using four of the V_pro8 units as static embedders and de-embedders allowed audio channels to output direct to production. Embedders being used for applications with no specific vision for them (such as a voiceover booth) are able to drive a slate on the screen via the V_Pro8 to identify the signal visually,“ says PAT Engineering Manager, Adam Langham. “The two further V__pro8 units are used for MCR processing applications, giving 16 channels of ad hoc processing. 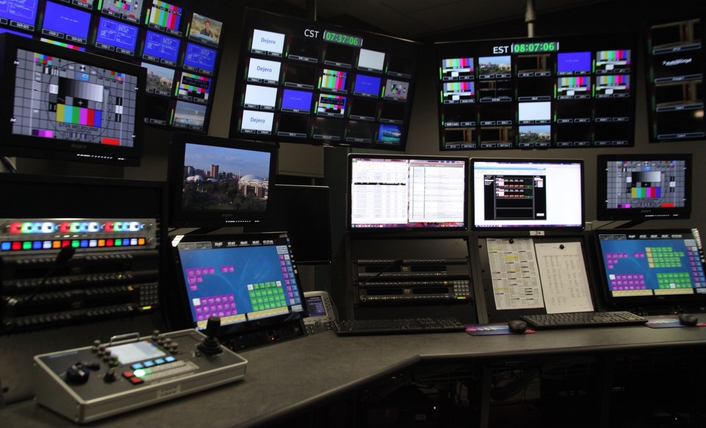 “To interface the six MADI streams from each of the V__pro8 units, we daisy-chained all of the units to achieve efficient use of MADI ports, resulting in one MADI port for northbound and one for southbound traffic as backup. This was achieved via VSM tieline management.”

VSM sits at the heart of the installation, supporting all of the primary broadcast systems, including the Lawo V__pro8s. In Master Control, processing of inbound signals via the V_pro8s appears as a single page of the VSM panel, offering immediate control of all of the parameters to which NINE requires ready access.

The use of VSM has also provided NINE Network Australia with a centralized control position for a Talent Operated Studio (TOS), to the point where the entire studio can be set up with a single button press. A further advantage of VSM in this application is that it removed the need for expensive standby vision switchers, while still offering expanded input selection and DSK control via a touchscreen or hardware panel.

When NINE began talks, the outline also included control of the facility’s Audio-over-IP networks through traditional XY style router panels. The ability to integrate baseband and IP routing workflows of both video and audio, along with parameter controls, provides a truly future-proof control layer, and leaves the operator free from leaning the engineering complexities of the system.