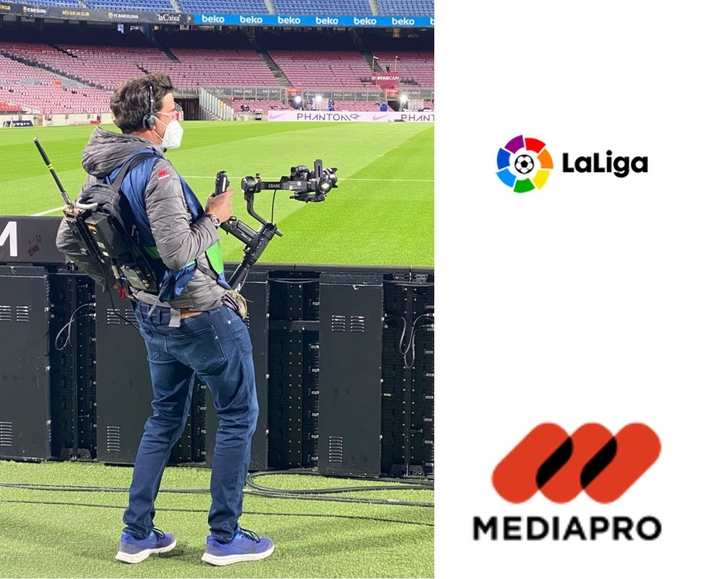 The camera has never been used for live football before and offers an up-close-and-personal audiovisual experience, comparable to a video game

LaLiga and MEDIAPRO have incorporated a new state-of-the-art pitchside camera into their broadcasts, which provides viewers with an image quality similar to that of a film or a video game, as well as an ultra-realistic experience that makes them feel like they are actually in the stands at the stadium or just a few metres away from the players on the field.

Thanks to this innovation, LaLiga continues to prove itself a pioneer in developing cutting-edge audiovisual technology, becoming the first major football league to integrate a camera with these features into its live broadcasts using a wireless link.
This kind of camera is normally used to record ‘extra’ content, such as the pre-match arrival of players and fans at the stadium, but until now had not been used as an official camera to broadcast live match action.

The large-sensor, mirrorless camera captures an image with a very shallow depth of field thanks to its 35mm sensor, thus achieving a very different result from other, more established broadcast cameras. The resulting blurred background video effect is very similar to ‘portrait mode’ photographs that can be taken with certain mobile phones.
In addition, it integrates a stabiliser support similar to that of steady-cam technology, providing a highly cinematic visual experience, comparable to the image quality of a video game. 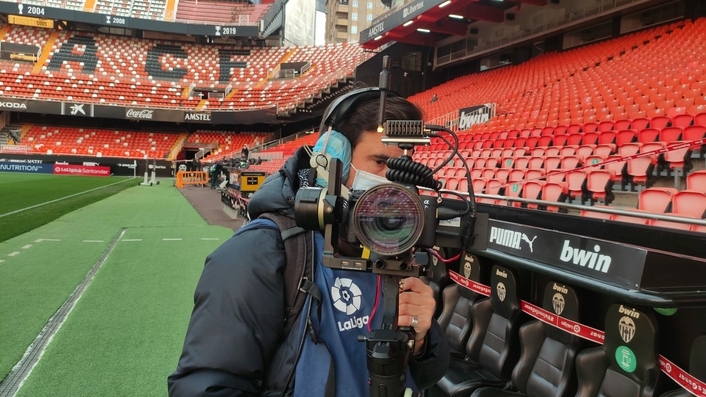 This pioneering new initiative was tested for the first time during the Valencia CF vs CA Osasuna fixture on Matchday 19 and during FC Barcelona vs Athletic Club on Matchday 21. LaLiga fans around the world will have the opportunity to enjoy this realistic image quality in selected matchday fixtures during the rest of the season.

“At LaLiga, we are constantly researching cutting-edge innovations and technological solutions that allow us to offer the best audiovisual product. To this end, we will continue developing and fine-tuning this new system to enhance the visual experience for our fans,” said Melcior Soler, Director of LaLiga’s Audiovisual Department.
Òscar Lago, responsible for LaLiga match production at MEDIAPRO, added: "We are committed to providing solutions that enhance our broadcasting quality and develop a product that is more visually appealing for LaLiga fans."

With fans still absent from stadiums due to the COVID-19 pandemic, LaLiga and MEDIAPRO have continued to introduce technological innovations to improve the audiovisual broadcasting quality of the competition, among them new camera positions that achieve better angles and provide new shots never seen before. LaLiga already has more stadiums with aerial cameras – 14 in total – that offer a unique vision of the game, as well as drones for other aerial shots, 360º replays at 8 of its stadiums, among other cutting-edge audiovisual technologies that provide a unique television experience.