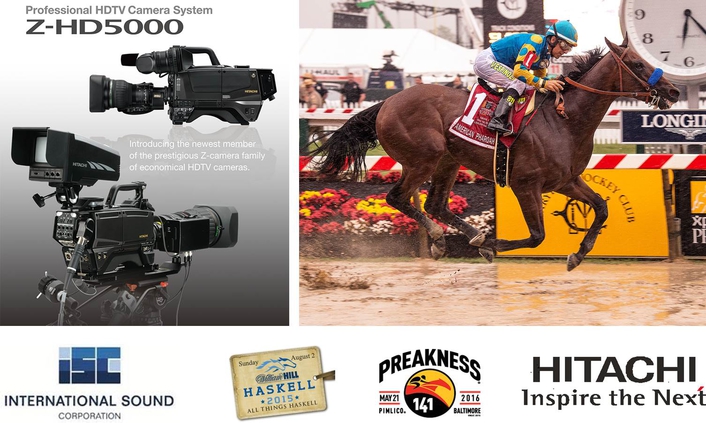 Quality, performance and reliability of Hitachi Z-HD5000 cameras take the crown at the Preakness and Haskell Invitational, as race tracks trot to high definition production

International Sound Corporation (ISC), a provider of high-quality products and services for the racing and sports industries since 1960, is deploying Hitachi Z-HD5000 HDTV cameras for superior-quality acquisition as race tracks across the country upgrade their video operations to high definition. The exceptional picture fidelity, performance and reliability of the Z-HD5000 cameras under demanding operational conditions were at the forefront during production for two of this year’s most prestigious racing events, the Preakness Stakes and the William Hill Haskell Invitational.

As one of ISC’s key service offerings, the company designs, installs and operates complete broadcast control rooms and production workflows tailored to the unique needs of race tracks. ISC has deployed hundreds of Hitachi cameras in varying configurations across nearly 50 tracks, and continues to expand their use of Hitachi as their clients make the transition from standard definition (SD) to HD video production.

“We are using Hitachi cameras exclusively for all of our installations,” said Joe Gordon, Executive Vice President at ISC. “Like all of the Hitachi camera models we’ve worked with, the Z-HD5000 provides exceptional value, delivering remarkable quality and performance at a cost-effective price. Hitachi has also been a great company to work with, providing phenomenal service that we can always count on.”

Hitachi's highly-acclaimed durability and reliability also withstand the significant challenges of the tracks’ outdoor environments, from dirt to dramatically varying weather. “There is a lot of dirt and sand in the air, especially for cameras close to the track,” explains Gordon. “And the horses run in all sorts of weather conditions, rainy or dry, from 10 degree cold to 100 degree heat. The cameras take a lot of abuse, and hold up to it well.”

The benefits of the Z-HD5000 cameras were showcased during marquee events at the sites of two of ISC’s most recent HD installations. Pimlico Race Course hosted the Preakness Stakes – the second leg of thoroughbred racing’s Triple Crown – while Monmouth Park Racetrack hosted the William Hill Haskell Invitational, which featured American Pharoah in his premier race after becoming the first Triple Crown winning horse in over 35 years.

The Pimlico and Monmouth Park installations each include seven Hitachi HD cameras. The majority are deployed in fixed positions while others are used handheld, highlighting the camera’s operational flexibility. The cameras are connected by SMPTE fiber to Hitachi CU-HD500 camera control units with RU-1000VR remote control units.

The Hitachi cameras are in use throughout each track's entire race schedule, with live productions up to five days a week and ranging from four to six hours each. The resulting productions are seen on monitors throughout the local venue and are distributed to off-track betting (OTB) establishments, sports books, racing-focused specialty TV networks and local television stations.

As more race tracks around the nation move to high-definition video production, ISC will continue to depend on Hitachi cameras as the linchpin of their acquisition workflows. “Great quality, great reliability and great value from a great company to work with -- that says it all,” concluded Gordon.