Inside The Mix With Ana Monte And Daniel Deboy 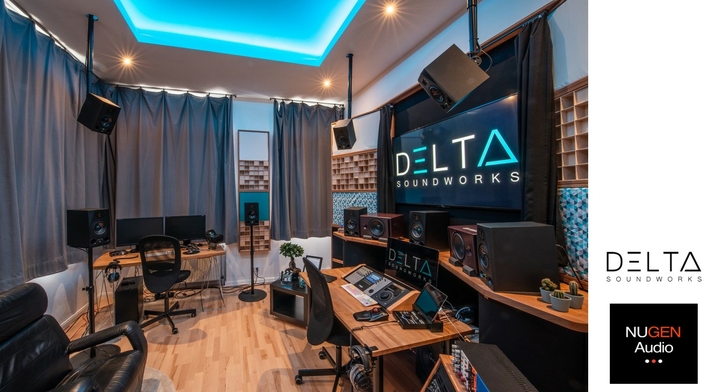 Q: Tell me about the company. What inspired you both to start Delta Soundworks?
Ana: Founded by myself (Ana Monte, lead sound designer) and Daniel (Deboy, lead sound engineer) in Heidelberg, Germany in 2016, DELTA Soundworks is a 3D/immersive audio post-production facility. Our projects span across installations, virtual reality, 360-degree films and gaming, as well as feature films, documentaries, TV shows and commercials, and more. Our team consists of a highly skilled and creative group of production sound mixers, recording engineers, sound designers, foley artists, composers and music producers.

DELTA Soundworks grew from the combination of my creative background in film sound design and Daniel’s high-level understanding of the science of sound. I studied music industry and technology at California State University, Chico, and I earned my master’s degree in film sound and sound design at the Film Academy Baden-Württemberg, here in Germany. Daniel is graduate of the Graz University of Technology, where he focused his studies on 3D audio and music production. He was honored with a “Student Award” from DEGA, the German Acoustical Society, for his research in the field of 3D sound reproduction. He has also received gold, silver and bronze awards from the Audio Engineering Society (AES) for his music recordings.

Q: Do you have any favorite or notable projects of which you are really proud?
Ana: Too many to remember! My favorite project, so far, has been the Stanford Virtual Heart, which is a project we were able to work on because of a very happy coincidence. We attended this large IT/computer expo here in Germany and these two guys, the two Davids [Axelrod (MD) and Sarno, Stanford Virtual Heart creators] as we call them, were there with a prototype for their virtual cardiac training system. It helps not only medical students, but also families of children with heart defects to learn the various signs and complications associated with various conditions. A user can put the virtual reality glasses on and use the technology to [virtually] ‘touch’ the heart, open it and see the different sections, understand where the condition lives, etc.

Recognizing that diagnosing a heart condition is based largely on listening to the way it beats, they wanted to make it possible for people, especially med students, to hear what each condition sounds like from inside the heart. So, for our contribution to the project, we recorded and edited the auditory components of 14 of the most common heart conditions. We learned a lot about the different patterns and rhythms of 14 different infant/newborn heart problems. From a production standpoint, the project was very straightforward, but the sound design for this project was very interesting. In addition to the standard, mono source recordings of a heart directly in front of a person, we also had to ‘transport’ people inside the heart. We had to provide a perspective that essentially gave the illusion that each piece of the heart is surrounding the user, with the sound of each section coming from a specific direction. Since it would be very difficult to place a microphone directly into the beating heart of an infant, we had to take a very different approach to capture sound. Dr. Axelrod provided us with a database of pre-recorded heartbeat sounds, which we then used to analyze the sound and frequencies of the conditions to reconstruct the sound from scratch. We were able to accomplish it all with synthesizers and other recording techniques. It was an incredible experience.

Q: What other types of projects have you guys worked on? Beyond the virtual heart project?
Daniel: I think our biggest current project is working for The Science Dome at the Experimenta, a massive science center in Heilbronn, Germany. It’s a 360-degree theater with a 360-degree projection system and a 29-channel audio system, which is not standard. We create the entire sound production for all the theater’s in-house shows.  For one of the productions, our composer Jasmin Reuter wrote a beautiful score, which we recorded with a chamber orchestra. It included a lot of sound design elements, like rally cars. We put all these pieces together and finally mixed them in a 3D format. It was a great ride for us, and I think it really hit on everyone’s core competencies.

Ana: The Science Dome has a very unique format. It's not a standard planetarium, where everyone is looking up and to the middle, but rather a mixture of theater plus planetarium, wherein people look in front, above and behind. For example, there’s a children’s show with pirates who travel to the moon. They begin in the ocean with space projected above them, and the whole video rotates 180-degrees around the audience. It’s a very cool format and something that is pretty unique, not only in Europe, but globally. The partnership with the Experimenta is very important for us because they do their own productions and eventually they might license it to other planetariums. 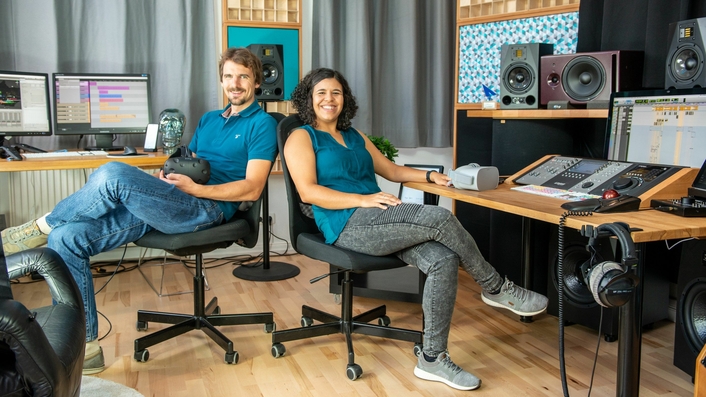 Q: With such a wide array of projects and requirements, tell us about your working style and your workflow.
Daniel: Something very unique to DELTA is that we are able to quickly and easily adjust to different workflows because we know, or at least love to be, at the edge of what’s possible. We are always happy to take on new and interesting projects, try out new workflows and design, and look at up-and-coming techniques. I think that’s kind of a unique selling point for us. We are way more flexible than a typical post-production house would be, and that includes our work for cinema sound production.

Q: What NUGEN software do you use and how does it incorporate into your workflow?
Daniel: We have had a license for Halo Upmix for a while and we've been using it quite a bit for 5.1 production. We rely on it significantly for The Experimenta Science Dome projects because we also work with a lot of external source material from composers who deliver it in stereo format. Also, the Dome is not a 5.1/7.1 theater, it’s 29 channels. So, Upmix really helped us go from a stereo format to something that we could distribute in the room. I was able to adjust all my sources through the plugin and, ultimately, created a 3D mix. Using NUGEN, you can really have fun with your audio.

A lot of the material came from synthesized sounds – such as virtual instruments, drones and other electronic music elements, which typically come in a standard stereophonic format – and I was able to use NUGEN to find a suitable way to fill the entire space with these sounds, rather than just from one location. NUGEN Upmix really helped me to make that happen because it was just so easy to dial-in the spread while also going from a stereo format to something that is multi-channel. I had a channel set up with NUGEN in it and then I would just route the signal there and get instant results, it definitely sped up the process a lot. Sound-wise, I think it also helps to make these contrasts happen. I wouldn’t know how else to produce that without an upmix tool like this.

Ana: I use Halo Upmix for sound design, especially to create atmosphere sounds, like a forest. I plug in my source and Upmix just works. It’s really great; I don't have to spend hours tweaking the sound just to have it only serve as a bed to add extra elements on top. For example, maybe I want an extra bird chirping over there and then, okay, we're in the forest now. It works really well for tasks like that.

In addition to Upmix, we use NUGEN’s Halo Downmix and Loudness Toolkit heavily for our standard film, television and streaming projects. Those metering tools are really fantastic and the fact that NUGEN has the seal of approval from Netflix and Dolby proves that it’s very reliable.

Daniel: We also just started using MasterCheck as a comparison tool to preview a lot of our stereo mixes for music that gets released on Youtube. Before MasterCheck, there were so many times that we put something out for YouTube only to realize after the release that it sounded bad. MasterCheck allows us to pinpoint any potential problems with the compressed audio for streaming even before it goes live.

Q: How has your interaction been with NUGEN as a company?
Daniel: You can see that they are very open-minded people who are interested in getting their products out into the production world. It has been super easy for us to work with them and to be remembered among their team. Our working relationship with NUGEN has been great.