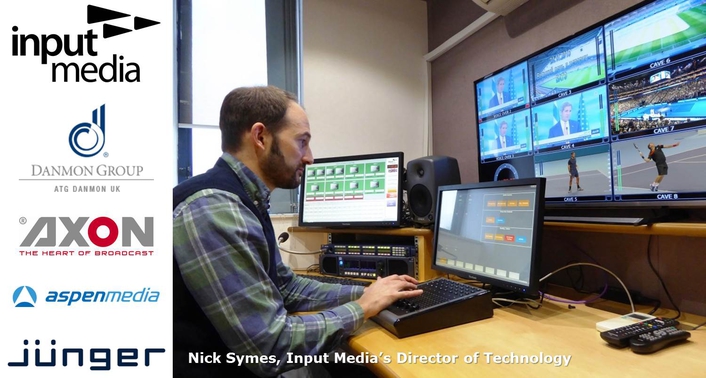 The units, which were supplied by Jünger Audio's UK distributor Aspen Media, were installed as part of a major overhaul of the company's eight voiceover suites. This also included the installation of an Axon Digital Design Cerebrum Monitoring and Control System and Ikegami full HD monitor displays. The suites are now fully integrated into the central broadcast infrastructure of Input Media's production centre, thus allowing the company to work faster, smarter and be more responsive to the needs of clients such as UEFA, The FA, The French Tennis Federation and the BBC.

For this project, Input Media chose ATG Danmon as its systems integrator and worked closely with them to identify the right equipment for its refurbished facility.

Nick Symes, Input Media’s Director of Technology, says: "We looked at several different technology options, including installing a traditional sound console, but eventually we went with the combination of Jünger Audio processing and Axon Cerebrum control because this allowed us to connect everything to our central Snell router. The Cerebrum software acts as the main controller and presents our operators with a consolidated view of all of the D*AP4 VAPs (we have eight of them – one in each suite) so that they can control the characteristics of each mix.

"With this system, we can easily switch sources around and implement fail over, so if one of the commentary boxes in one of the booths develops a problem we can physically take the commentator out of that booth, put him into another and route everything he needs to the new booth at the touch of a button." 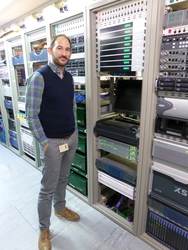 Axon's state of the art Cerebrum is an advanced and customizable monitoring and control system that links broadcast equipment from all major manufacturers using either SNMP (Simple Network Management Protocol) or third party protocols, including Ember+ which is compatible with  all Jünger Audio D*AP units. The system supports a wide range of devices including routers, production switchers, servers, audio desks, camera control units, receiver decoders, multiviewers and waveform monitors, and its advanced functionality and broad range of features simplifies multi device control onto one easy-to-use interface.

"The Jünger Audio units were chosen because they offer flexibility and control over each mix and because they have a fantastic selection of inbuilt features for audio processing, we are future-proofed to deal with the evolving requirements of our clients should the need arise," Nick Symes adds. "Also, the product ensures that all loudness values are compliant with current legislation, so that provides great peace of mind."

Although football is a key part of Input Media's business, its voiceover booths handle commentary from a wide variety of sports. This commentary is fed all over the world, according to the demands of the client.

Just before installing Jünger Audio D*AP4 VAP Edition units, Input Media realised that some modifications were necessary to meet the specific needs of a number of its clients.

"On certain matches where there is dual commentary we need to mix two voices together so that we can hand them off as a mono commentary mix," Nick Symes explains. "Initially the D*AP4 VAP units couldn't do this because we were effectively asking them do more than they were capable of. However, Jünger Audio readily agreed to implement some extra monitoring processing in the box to allow us to do this, and we are now very happy with the results. They basically re-engineered the internal DSP processing to provide two extra monitoring channels that could be configured as stereo, dual mono or independent mono, as and when needed."

The implementation of Jünger Audio and Axon technology is allowing Input Media's voiceover operators to work in a more flexible and creative way. "This technology is really smart and we are only just starting to explore what it can do," Nick Symes says. "With the Axon Cerebrum system, in particular, we recognise that it can service so much more across other parts of our facility. Upgrading the voiceover suites is a start, but our long term plan is to look at implementing more cross system control to make our disparate systems work better together. However that is quite an undertaking and we have to be sure the operational benefits justify the expense and time it would take to do the work, so although it's something we have earmarked for the future, we are not there yet."