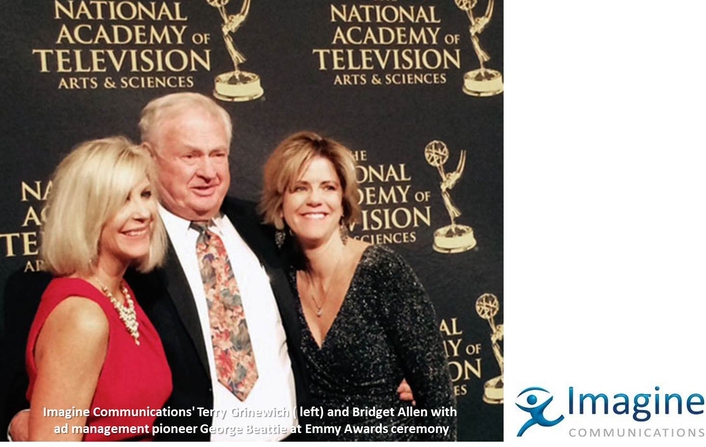 Imagine Communications, empowering the media and entertainment industry through transformative innovation, has been awarded an Emmy® for Pioneering Optimization of Advertising Placement in Single Channel Linear Television Programs by the Technology and Engineering Achievement Committee of the National Academy of Television Arts and Sciences. The award was presented January 8 at a ceremony at the Bellagio Hotel during the Consumer Electronics Show in Las Vegas.

This is Imagine Communications’ 10th Emmy® award. The company is being recognized for groundbreaking ad insertion technology that originated in the late 1960s but still serves as the foundational technology behind today’s advanced and fully automated advertising sales and traffic systems. The first successful application of computerized automation of business processes within a broadcast operation, this revolutionary technology remains relevant today and underpins the innovation driving the evolution of Imagine Communications’ industry-leading ad management solutions.

“We are extremely proud to be honored once again with one of the world’s most distinguished awards for technology excellence,” said Charlie Vogt, Imagine Communications CEO. “This achievement not only speaks to our rich legacy in the broadcast industry, but also validates the positive and enthusiastic reception our next-generation advertising technology is receiving from customers today. The media and entertainment industry is rapidly evolving and now, more than ever, requires technology partners that provide transformational innovation that is guided and informed by a long and distinguished heritage in the broadcast industry.”

This recognition from the National Academy of Television Arts and Sciences is an acknowledgement of the pivotal role this technology played in shaping today’s ad management landscape. Thousands of television and radio stations, as well as content distributors and aggregators, are running automated business process systems that are based on the spot placement algorithm and related procedures introduced nearly five decades ago. The technology originally relied on mainframe and minicomputers, as well as keypunch card systems, to help automate and simplify what had previously been a manual and error-plagued procedure.

“It’s difficult to overstate the importance and the impact of this technology, a radical departure from the people-powered traffic systems that persisted well into the 1980s,” says Bridget Allen, vice president sales, advertising management systems, Imagine Communications. “Today’s media and entertainment industry owes a debt of gratitude to George Beattie and Jack Finlayson, the broadcasting pioneers who are chiefly responsible for this transformative technology.”

Harnessing the power of ad placement automation remains at the heart of Imagine Communications’ comprehensive advertising management solutions portfolio, which is focused on providing broadcasters and media companies with the tools needed to optimize and automate the monetization of ad inventory. The Landmark™ portfolio includes the award-winning LandmarkOSI™ Traffic and Sales solutions, as well as a number of new modules that vastly improve a station’s ability to manage the complexity of today’s selling and programming environments.  Imagine Communications recently launched xG Copy™ and xG Live Log™ for LandmarkOSI, streamlining the time-to-air for both copy and changes within the traffic system.  In addition, Landmark xG Open™, announced in September 2015, is an API-based programmatic solution that allows media companies to automate sales via programmatic exchanges.

About The National Academy of Television Arts & Sciences
The National Academy of Television Arts & Sciences (NATAS) is a service organization dedicated to the advancement of the arts and sciences of television and the promotion of creative leadership for artistic, educational and technical achievements within the television industry. It recognizes excellence in television with the coveted Emmy® Award for News & Documentary, Sports, Daytime Entertainment, Daytime Creative Arts & Entertainment, Public & Community Service, and Technology & Engineering.  NATAS membership consists of over 14,000 broadcast and media professionals represented in 19 regional chapters across the country. Beyond awards, NATAS has extensive educational programs including Regional Student Television and its Student Award for Excellence for outstanding journalistic work by high school students, as well as scholarships, publications, and major activities for both industry professionals and the viewing public.

About the Television Academy
The Television Academy seeks to expand the horizons of television excellence. It strives to empower the storytellers who shape the evolving television space through the programs, publications and events of the Academy and its Foundation. And it celebrates those who have led excellence by recording their stories and recognizing their achievements through accolades and awards, including television’s most coveted prize, the Primetime Emmy® Award.

About Imagine Communications
Imagine Communications empowers the media and entertainment industry through transformative innovation. Broadcasters, networks, video service providers and enterprises around the world rely on our optimized, future-proof, multiscreen video and ad management solutions every day to support their mission-critical operations. Today, nearly half of the world’s video channels traverse our products, and our software solutions drive nearly $50 billion in global ad revenue for our customers. Through continuous innovation we are delivering the most advanced IP, cloud-enabled, software-defined network and workflow solutions in the industry.