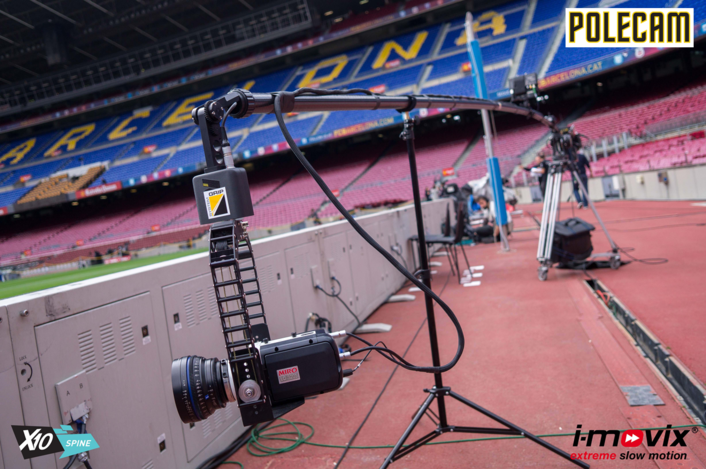 I-MOVIX and Polecam have collaborated on the development of a new product of the class-leading X10 ultra slow motion range. Already in use by Logo2 Producciones for behind-the-goal action at top Spanish football matches, the system is based on a lightweight configuration of the I-MOVIX X10 system optimised for use with Polecam cranes for portability, speed, and flexibility in situations where the camera needs to be closer to the action.

Featuring an I-MOVIX X10 Spine with the compact Vision Research Phantom Miro 320S high-speed camera, the system operates at frame rates up to 1,500 FPS in 1920x1080 resolution (and up to 3,000 FPS in 1280x720) with instant replay, and offers the major operational advances provided by the X10 technology, while the Miro 320S camera itself can be used for additional non-broadcast shooting.

“As shown by Logo2 Producciones in its advanced productions under the direction of Victor Santamaria, for matches like El Clássico between Real Madrid and FC Barcelona, I-MOVIX ultra slow motion combined with the freedom of movement of Polecam cranes delivers an unbeatable sense of intimacy and insight into the action,” said Steffan Hewitt, Director Polecam Ltd.

About Polecam
Polecam Limited is active globally from its Headquarters base near Bedford, England and is recognised across many different markets to include Broadcast, Extreme Sports, Medical, Military & Security, Industrial & Commercial, Corporate, Natural History and emerging markets for specialist Property, Wedding and Music environments; as the market leader for super lightweight, highly portable camera jib, minicams, lenses and remote control systems.