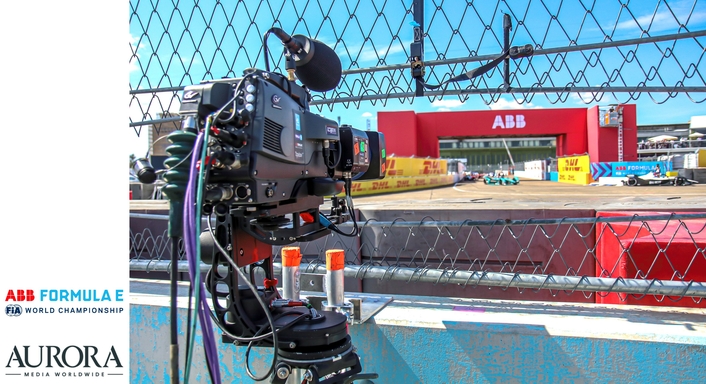 A total of three Grass Valley cameras were operated remotely.

The finale of the seventh season of Formula E, the FIA racing series for electric racing cars, took place at the former Berlin-Tempelhof airport in mid-August 2021. Aurora Media Worldwide from London was responsible for the live TV production. Bernhard Herrmann observed for us how more than 30 cameras captured what was happening.

The conditions were ideal for the season finale of the FIA Formula E at the former Berlin-Tempelhof airport, where a 2,300 meter long circuit had been marked out. From Friday to Sunday best summer weather prevailed, bringing sunshine and temperatures around 30 degrees Celsius. The event took place under strict pandemic security measures. Therefore, employees who wanted to go through the old airport building to the concrete runway had to go to a control center and undergo a PCR test after receiving their personal accreditation, even if they were fully vaccinated against Covid-19. If the result was negative, a text message was sent and the accreditation card was activated at the same time. On the way to the media center at the racetrack, miles of thick power cables were laid out everywhere and well as panels with solar cells. Nowhere did it smell of high-octane gasoline like the car races with combustion engines, just pleasantly of fresh air.

Also acoustically there were more peaceful conditions. Anyone who had previously watched the Formula E races on Eurosport and Sat.1 had permanently been exposed to an unpleasant whistling sound from the racing car's electric motors. In reality, however, the racetrack is much quieter. The whistle can only be heard directly on the racetrack at certain high speeds of the racing car and briefly until they brake before the next bend. But since you rarely wish to transmit silence on television, it apparently had been decided to grant the television audience a more permanent sound experience through appropriate miking and mixing.

Lee Flay, Technical Director of Formula E TV Production at Aurora Media Worldwide, kindly found the time to accompany us on a tour of the broadcast center and the racetrack and explain the technical setup to us. The British company has been producing the live broadcast of Formula E since the first race, with Timeline Television Ltd. provides the technical equipment. Formula E Operations Ltd. organizes the TV production for the FIA. All three companies are based in London. The setup of the entire broadcast system, including the technology used, has existed in this form for four years. 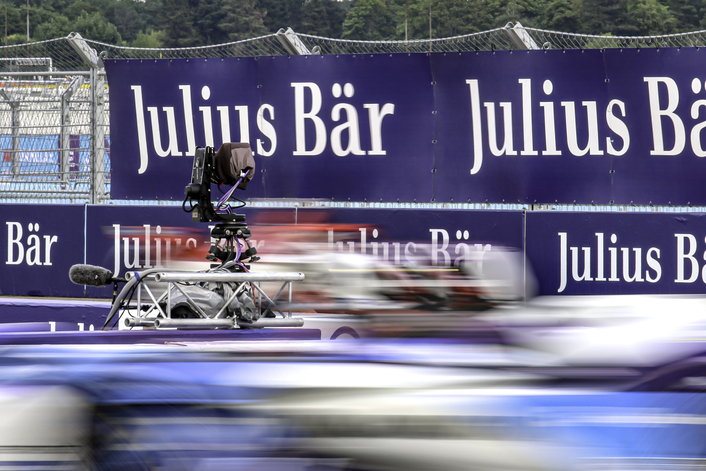 CAMERAS
Eighteen Grass Valley LDX-86 cameras were used at the racetrack, three of them in a remote version. Several cameras were installed on specially made aluminum brackets on the concrete elements of the track boundaries. The chain link fences mounted on top had recesses for the lenses. In addition, one camera each was mounted on four telescopic working platforms at a height of 43 meters. A Camcat rope camera system was hoisted between two cranes over a length of about 750 meters above the racetrack. This enabled the camera which was attached to a gimbal to record the racing cars from above at speeds of up to around 130 kilometers per hour and send the images wirelessly to the TV compound. A special feature of Formula E is a camera in the middle of the start and finish straight. Each camera can be used for 3-fold super slow motion images.

Eight Marshall mini cameras supplied additional views at specially selected points on the racetrack. As is already known from Formula 1, eight potential camera positions were also provided in the racing cars themselves. These were located in the front, the rear, the two rear-view mirrors, on the front of the Halo system with a view of the driver and in the helmet. This tiny camera sensor is positioned directly next to one of the driver's eyes, depicts the driver's exact field of vision and allows fans to take part in the racing action at close quarters on the television and video walls on the racetrack.

All eight camera positions are pre-wired in the Formula E racing cars. "But not all cameras are always installed," explains Technical Director Lee FlayIN order for nobody to get an unfair weight advantage, dummies of the same size and weight are attached. Depending on the racing situation, cameras can also be swapped on the race weekend. For example, a driver who has a chance of winning or who has achieved a better position in qualifying can get the complete camera setup at short notice. Almost every camera is recorded separately. An employee coordinates the 48 inputs with the moving images for the live replays and the re-live scenes. Four EVS operators are responsible for eight EVS remote controllers. 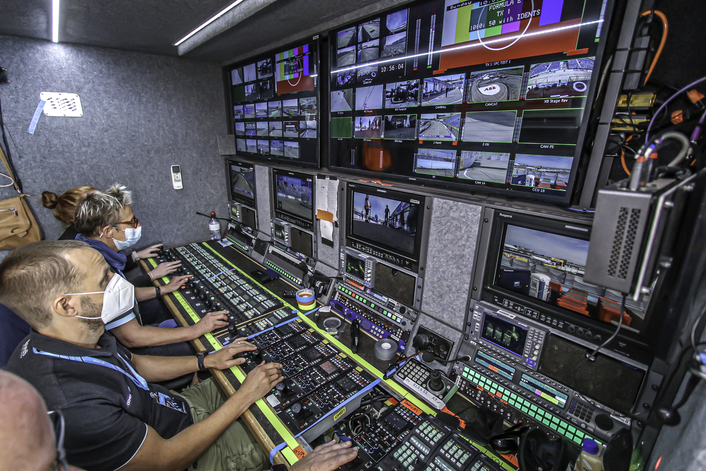 14 containers were available for image technology, director’s workplaces and communication.

PRODUCTION OF THE WORLD FEED
The World Feed is currently still being produced in high definition and in stereo for approximately 186 countries. According to Lee Flay, setting up the 14 containers in the TV compound takes around four and a half days. The dismantling after the race on Sunday is much faster and only takes about six hours. A total of 105 employees in this TV production have to deal with a peculiarity in Berlin: On the second day, the racing cars drive the route in the opposite direction! This is why the lines of the approximately 42 kilometers of fiber optic cables have to be laid twice, because in the opposite direction some camera positions have to be changed overnight after the first race on Saturday.

Before the race, several cameramen walked through the pit lane equipped with wireless Vislink transmitters on the cameras to produce the FIA TV program with interviews of racing drivers and technicians from the racing teams by reporters and editors. During the races, these cameramen then show the pictures from the command posts and from the technical areas in the racing teams' pits. All signals were received in a container, which is used as the central equipment room, and from there they were distributed in the TV compound.

In general, Formula E tries to reduce the “carbon footprint”, says Lee Flay. This also happens at the request of the FIA. Formula E is therefore also a leader in marketing strategy compared to Formula 1 and other racing series. Three sets with technical equipment and furnishings are transported worldwide by ship to the next racing location. Only one set with special technology, the transport of which is time-critical, is transported by cargo plane.

Three so-called “TV Galleries”, which are three containers connected to one another to form a large room providing workplaces for image direction, editing, recording management, production and technical manager, were located on site. In addition, two more identical TV galleries were positioned in London, where they were used to produce the English content. All wireless communication on site is located in a separate container and is implemented by Tata Communications from India. There are two picture directors for the TV production: One is in the TV gallery at the race track in Berlin and selects the pictures on site. The second picture director is in the "International TV-Gallery" in London and responsible for the World Feed. 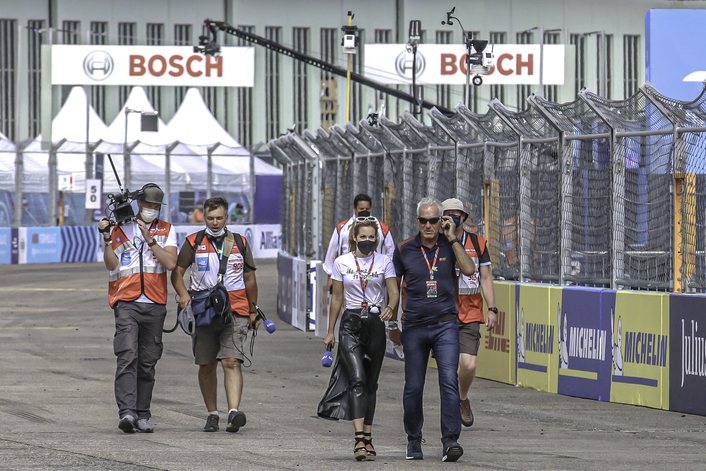 The cameras for the presenters were equipped with wireless transmitters from Vislink.

At the moment the image signal is only produced in an HD-SDI environment, even though the cameras are already UHD-capable. If the global demand for UHD HDR for Formula E increases, the FIA will have to consider producing Formula E, like Formula 1, in UHD HDR throughout, explains Lee Flay. This is why the current stereo sound is also optimized for Dolby Atmos and Dolby Digital 5.1. “We may have this upgrade for the 2023 season,” added Lawrence Duffy, general manager of Aurora Media Worldwide. According to Duffy, the current production costs are around half a million to just under a million euros, depending on the city and racetrack.

Lee Flay has been Technical Director of TV production since the conception of Formula E around eight years ago. Many cameramen and camerawomen as well as the core team with the picture directors have been part of the entire TV production team for many years. The advantage is that the racing drivers and pit crews of the racing teams know the cameramen personally and thus there is a great deal of trust between them, says Lee Flay. Therefore, unlike in Formula 1, the TV staff is allowed to carry out necessary work on the TV equipment on the Formula E racing cars. The TV staff is usually booked for at least one season. The personnel for the European races are recruited in the respective countries as far as possible. Sometimes this also happens worldwide at the international races. The background to these measures is the reduction of the carbon footprint, explains Lee Flay. 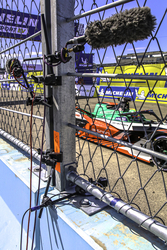 SOUND
The sound at the racetrack is mixed in stereo in the sound control room. Microphones and cameras on and next to the track use the automated „audio following video” system in order to get the right sound for the picture at the respective camera positions when the picture is cut quickly. The sound control room, which is housed in two sound mix containers, also mixes the radio traffic between the racing drivers and the pits, or the racing engineers, into the broadcast sound. This means that the audience can also hear the cheers from the winning driver's racing car as they cross the finish line and other comments approved by the FIA. The national TV stations then supplement the international broadcast sound with the comments of their reporters.

All data for the on-screen graphics were collected on site in Berlin during the race. The data stream then is transmitted to the „Race Graphic Operator” via a fiber optic cable. The TV graphics created there with vehicle positions including driver names, driving times, pit stops, further information and inserts were presented to the two image control rooms via fiber optic cable. The virtual graphics with automatic recognition of the track boundaries and other VR feeds are visualized in Berlin using three Vizrt systems. Software from Ncam Technologies from London is also used in the TV compound in Berlin. There is also a small green screen studio on site in the TV center, for example to produce VR graphics with the drivers. Both graphics program signals were transferred to Berlin and London and were thus available on the image mixer for overlaying in the program image. The final program image from Berlin was then transferred to London via fiber optic cable, from where it was sent to the respective national TV stations.

CONCLUSION
The two transmissions of the Formula E races from Berlin were sent as a world feed with image and sound without any fault. In Germany, the market share of 14 to 49 year olds was 8.2 percent. A total of 580,000 spectators saw the races. „Formula E is a sport made for TV,” says Technical Director Lee Flay, who in future would like to further reduce the number of employees on site and use remote production systems in order to further reduce the carbon footprint . What the future of the racing series itself will look like is a little uncertain after the announced withdrawal of the teams from Audi, BMW and Mercedes.