Medellin based rental company Genesis Producciones is owned and run by Juan David and has just moved into spangly new warehouse premises in the south of this busy, buzzing and beautiful city. It’s in one of the industrial areas with lots of space – for future expansion - and panoramic views of the surrounding mountains. It’s a move that takes Genesis to a new level of operation. Also upping the game, two years ago Juan and his team decided to start investing in Robe.

This was shortly after AVcom Colombia was appointed as the country’s distributor, and it was a decisive move with 48 x Spiiders making up the first purchase, followed this year with 48 x MegaPointes.

Juan decided to go with Robe for two major reasons.

The first was that from about 2 years ago, the brand started appearing so regularly on band and artist riders that it was not possible to ignore.

The second one was that he knew the tech support and backup he’d receive from AVcom would be second to none as he’d already been a client of theirs for some time for other brands and audio kit. “It needs both these aspects to be right - the brand / hardware on one hand, and also the support and service on the other” he underlined.

Genesis has several in-house lighting designers on the staff who love the small size, light weight and versatility of the Robe fixtures: “When Robe some time ago decided to focus on producing smaller lights which were even more powerful, it was a stroke of brilliance” says Juan, adding that the Genesis Robe kit is out all the time!

Around 70% of Genesis’ work is in the live music sector, with the other 30% being corporate and industrial events. They have provided production for a string of international artists visiting Colombia recently including Radiohead, Depeche Mode, Green Day and Roger Waters, and all of them have accepted their MegaPointes and Spiiders.

“I’d always known of Robe as a brand” says Juan, “but for me it’s been the last three years that there’s been noticeably more Robe on all the tech specs. As a rental company, we have to respond to that and ensure we can offer what people want.”

Juan is totally passionate about the industry and his business. He loves the excitement of live music and events, and the challenges of ensuring all the technical productions leaving the warehouse are the best and most flexible and appropriate for the project.

Getting into the mad world of entertainment technology all started when Juan was at high school 15 years ago, when he became a mobile DJ called ‘Minitec’ and had to organize his own sound and lights. This became very successful, and at some point started raising the bar with the sound system and the lightshow. Word soon got around that this was something different and more bookings followed, etc. which led to requests to work on bigger and more serious events needing better equipment specifications.

At this point, Genesis was founded, and he started to build it up - steadily and sensibly - from there.

This continued like this for around 5 years, then in 2008 the company became fully and properly incorporated and established on the market, first in Medellin, then all over the country across which they work constantly.

There’s now 40 people working full time at Genesis and Juan keeps a keen eye on the latest technology developments across all the divisions. They have also invested in d&b audiotechnik on the sound side, another premium brand which has been solid and helped their kudos grow. 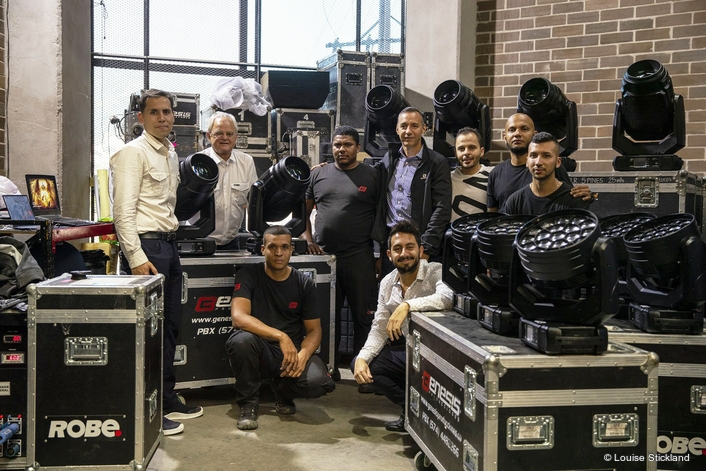