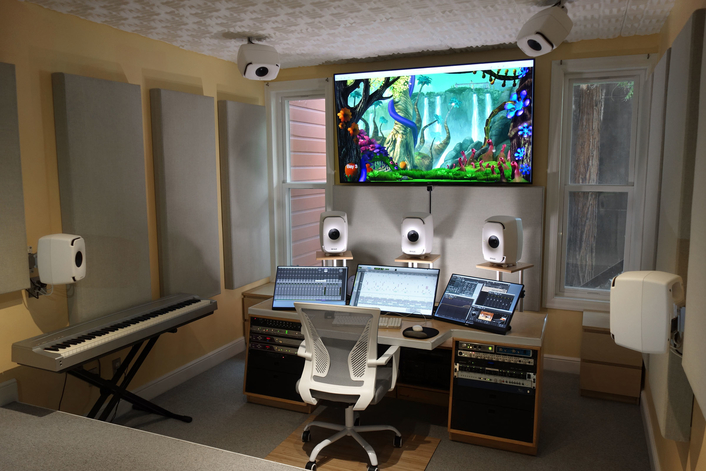 Andrew Roth does sound design across all categories and genres, and the Genelec 8341A and 8331A monitors and 7360A subwoofer provide him with an unmatched soundfield and perfect imaging for television, film, games, online media and more

Andrew Roth, Owner of Roth Audio Design, a San Francisco-based sound design firm, is emblematic of what sound design today entails. With credits in music, casting & direction, and recording and mixing for film, television, games, museum & theme park installations, radio productions, and on-line media, Roth has adapted his work to complement the broad range of media verticals in contemporary entertainment and other creative-content sectors. A typical week might see him lending his talents to classical and jazz music concerts, major motion picture & network television sound effects, and radio interviews, as well as voice casting, advanced audio restoration, audio direction and project consultation. To meet this wide range of needs, he needs monitoring that’s accurate, robust and smart. That’s why he’s chosen the 8331A and 8341A Smart Active Monitors™ from Genelec, the leader in active monitoring technology for four decades, for his most recent studio in the Bay Area.

Three Genelec 8341A monitors constitute his L-C-R array, with four 8331A monitors used for left-right side and rear monitors, and four additional 8331A’s used as overheads, providing the latest dimension in immersive object-based sound mixing and placement. A Genelec 7360A Smart Active Subwoofer handles the low end. All of the Genelec speakers are equipped with Smart Active Monitoring™ technology, Genelec’s award-winning self-calibration protocol, and all were installed in the bold white color scheme.

Roth has a pragmatic working style that seeks to get to the heart and soul of a project’s audio, from capture to mix, in a variety of playback formats. He notes, “I rely on my monitors to accurately tell me what’s going on in a piece of music or other audio, so that I can take it where it needs to go. For me, it’s about the usefulness and the results, rather than geeking out over the gear itself! Genelec Smart Active Monitoring gives me the tools I need, plain and simple.” Smart Active Monitoring creates an optimized and precisely controlled monitoring environment. After automatic calibration, monitoring setups ranging from simple stereo to immersive audio will perform with consistency even as they are compensating for any deficiencies in a listening environment.

And what initially drew Roth to the Genelecs was their sound. He’s owned Genelec speakers before and has come to trust them implicitly for their accuracy and ability to let him mix for long stretches without fatigue. But, he says, the 8341A and 8331A monitors take that to a completely new level. “I absolutely love them,” he says. “The technology architecture is amazing, and the imaging is perfect. You cannot ask for better sound. The same with the 7360 sub — it fits the bill for a room like mine that's on the smaller side, while maintaining the same low-end extension of the 7370. And with the Smart Active Monitoring technology, they also address and solve any problems my room might have.”

In addition, he says, the range of market sectors, media verticals and, most recently, monitoring formats, as object-based multichannel formats like Dolby® Atmos™ are quickly becoming adopted by film, television and games, the Genelec 8341A and 8331A monitors offer him incredible flexibility along with great sound and room adaptability. “We’re seeing Atmos becoming more and more common for a range of media, and Genelec monitors help me adapt to each one, while helping make my studio competitive with larger facilities when it comes to immersive sound formats,” he says. “And the 8341A is possibly the best center-channel speaker ever — the image is wide but remains focused, which means others in the control room don’t have to crowd into the sweet spot to hear it correctly. The Genelecs are the tools I need for a more complex sound industry.”

Genelec, the pioneer in Active Monitoring technology, is celebrating 40 years of designing and manufacturing active loudspeakers for true and accurate sound reproduction. Genelec is credited with promoting the concept of active transducer technology. Since its inception in 1978, Genelec has concentrated its efforts and resources into creating active monitors with unparalleled sonic integrity. The result is an active speaker system that has earned global acclaim for its accurate imaging, extremely high acoustic output from small enclosures, true high-fidelity with low distortion, and deep, rich bass.